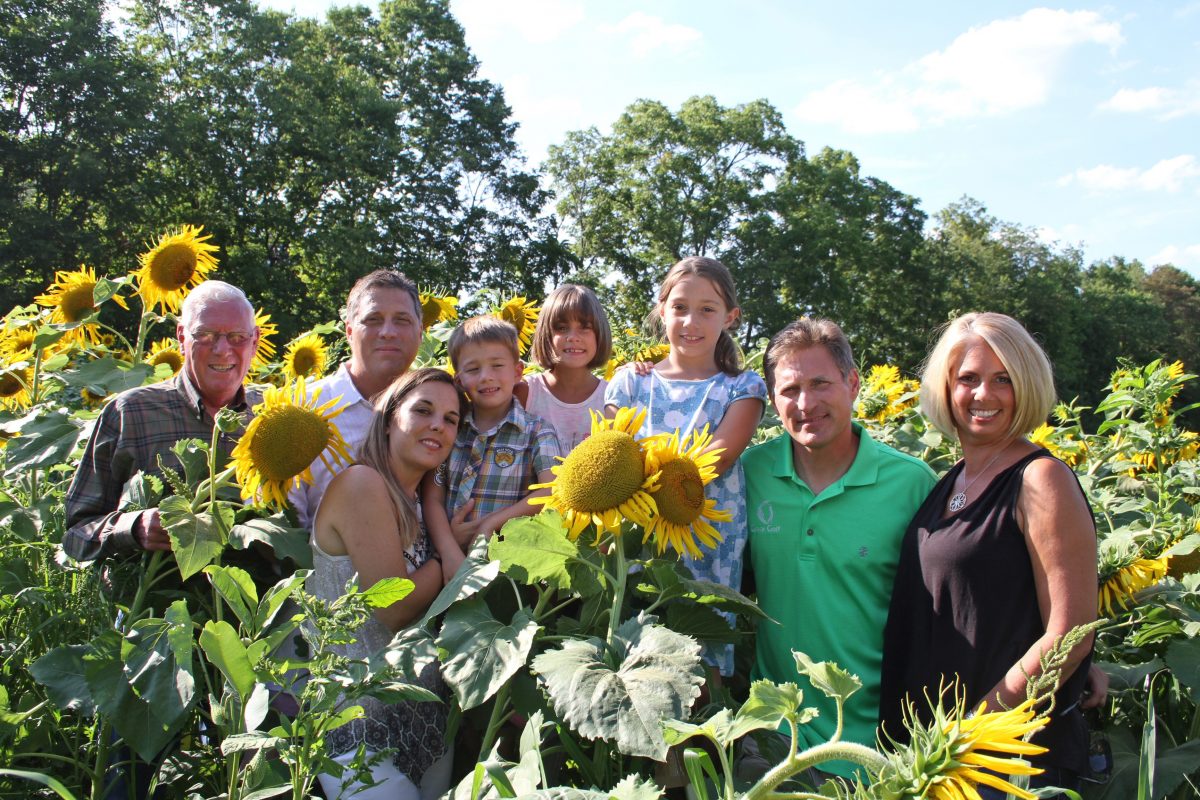 A Family’s Quest for a Healthier Oil Leads to Sunflowers

PLEASANT VALLEY, N.Y.—Kevin Haight is a farmer who was born and bred in the Hudson Valley, a fertile region bordering the Hudson River north of New York City. Like most small-scale farmers, he was on the hunt for an additional source of income.

At first, he thought of growing sunflowers for biodiesel. But a quick investigation of the economics made it clear to him that the idea was unfeasible. His brother, a Culinary Institute of America grad, gave him his million-dollar idea when he commented, “It is silly to burn something, when you can sell it by the ounce.”

The delicacy of the oil mixed with the nutty flavor of the sunflower seeds is like nothing I have ever tried.

Around that time, Haight’s wife, Traci Simonton, who is a registered dietician, realized that the expeller-pressed canola oil she had been recommending to her clients was filled with dangerous free radicals. She quickly learned that cold-pressed sunflower oil was far healthier.

A true, cold-pressed sunflower oil is hard to come by, so Haight was keen on making it work.

“I wanted this for the health of the family and the patients,” said Haight.

Haight turned to a veteran oil producer in Indiana, John Boyer, for help. Hudson Valley Cold Pressed Oils was up and running last October. This year will be the family’s third sunflower harvest. They expect to get about two million seeds from about 100 acres of sunflower plants.

Haight said he always plants a field along the road for “marketing purposes.” This year it’s in the Overlook Estates neighborhood in LaGrange, Dutchess County, near where the manufacturing facility is located.

People always call to ask where it will be this year, said Haight of the sunflower field. There are people stopping and taking pictures all the time. “The neighborhood is—in the best way—crazed about it,” he said.

The flowers were planted the first week of June. The young plants track the sun, but they lock east after flowering, said Haight, describing one of nature’s inexplicable intricacies.

The plants produce small, black, high-oleic oilseeds. The type that is sold in the black-and-white shells as a snack is a different variety.

After the seed is harvested, Haight cleans it before running it through his two presses. The press extracts the oil from the hull and seed, and extrudes the waste as high-protein meal. Haight barters the nutritious byproduct to a nearby Angus beef farmer who uses it as a supplement for his prized, pasture-fed steer.

The sunflower meal replaces the non-GMO soy he would have otherwise grown for the steer, said Doug Giles, owner of Walbridge Farm, but it is higher in fat and has more micronutrients.

Haight hands me a Dixie cup of the unfiltered oil straight off the press. It’s a rich, golden yellow hue, and still warm. The delicacy of the oil mixed with the nutty flavor of the sunflower seeds is like nothing I have ever tried.

I keep drinking, surprising myself because it is so light, unlike olive oil or coconut oil, which can sometimes feel heavy.

“Who drinks oil?” I think to myself. “I’ve spent a lifetime trying to avoid it.”

I quickly learn that high-quality oils are actually good for you, and that the challenge is to figure out how to consume the good stuff and avoid the bad stuff.

Cooking at home is the best way to ensure that you and your family are consuming healthy fats.

The bad stuff is unfortunately what is most easily available, because bad oil is the cheapest. Potato chips and fried foods are the most obvious, but any food item that is cooked in oil, or mixed with oil, can contain unhealthy fats. The body can safely process only a small amount of refined oils daily.

Refined canola, soy, peanut, palm, safflower, cottonseed, and partially hydrogenated sunflower oils are widely used by the food industry. Cooking at home is the best way to ensure that you and your family are consuming healthy fats.

Simonton’s family consumes the sunflower oil in rotation with other quality fats, she said, because the body’s needs are best met this way. Other “good fats” include butter, lard, ghee, coconut oil, nuts, avocado, and olive oil.

Simonton uses Hudson Valley sunflower oil in cooking, especially when its flavor is desired. When used unheated or lightly heated, such as in salad dressings, hummus, granola, salsas, and baking, the nutty flavor will come through as if it were an ingredient.

The company’s website is filled with recipes, including a new, dairy-free Coconut Chocolate Chip Ice Cream that Simonton brought for me to try. It was unbelievably good. The sunflower oil’s flavor only adds to the subtle complexity of the luxurious sweet.

Simonton also told me about how the family recently discovered the incredible marriage of their sunflower oil with bourbon maple syrup over pancakes. It replaces the butter, said Haight approvingly.

Sunflower oil has the highest Vitamin E content of any comparable oil.

According to Simonton, the nutty flavor is not tasted when the oil is used for sautéing or deep-frying, so it is not necessary to consider its taste for most cooking needs. However, temperature is a crucial consideration for the use of any oil. It is important to know an oil’s smoke point, which is the point where rancidity is introduced.

Despite having a similar nutritional composition to cold-pressed oil, refined sunflower oils are filled with dangerous free radicals. Of course, you won’t see this on the label.

Also, keep in mind that oxidation of most vegetable oils begins at 320 degrees Fahrenheit, so if you are cooking at a higher temperature, an oil high in saturated fat, such as coconut oil, ghee, or butter, is usually a better alternative.

Sunflower oil has the highest Vitamin E content of any comparable oil. It has 25 percent of your daily recommended allowance in one tablespoon.

Vitamin E is a potent antioxidant and a natural preservative, making this oil an ideal carrier oil for natural beauty products, or as a massage oil.

All oils contain a ratio of three major groups of fatty acids, and these are classified as follows.

The first is saturated fatty acids. These are stable at room temperature and resist oxidation. They are found mainly in animal fats like dairy, red meat, and chicken, and in coconut oil.

The second is monounsaturated fatty acids. These are liquid at room temperature but are fairly stable, even when exposed to heat. The most common type is omega-9 (also known as oleic acid), which is found in olive oil, high-oleic sunflower oil, avocados, pecans, and almonds.

The third is polyunsaturated fatty acids, which oxidize when exposed to heat and create harmful free radicals. The most common are omega-6 and omega-3 fatty acids, and these are found in many vegetable oils.

A key when it comes to the necessary consumption of fat is getting a healthy ratio of the essential fatty acids. An omega-6 to omega-3 ratio of 1:1 is optimal, according to a literature review published in the peer-reviewed journal Experimental Biology and Medicine.

The unfortunate reality is that the average American currently consumes a ratio of between 15:1 and 17:1, with disastrous consequences for chronic disease rates. Limiting intake of omega-6 fatty acids, and supplementing with omega-3s, is recommended for almost everyone. Omega-6s are created when a good oil like cold-pressed sunflower or olive oils are heated.

High-quality sunflower and olive oils are naturally high in omega-9s, which are considered nonessential fatty acids. They can be produced by the body, and this is why they tend to get less attention, according to a blog post by Dr. Andrew Weil.

Omega-9s do have a number of potential health benefits, though, such as strengthening the immune system, reducing inflammation, and improving cardiovascular health, and they are not considered bad for you when consumed in the right quantities.

How Does Sunflower Oil Compare With Olive Oil?

SOURCE: Figures are calculated based on the products’ Nutrition Facts label.