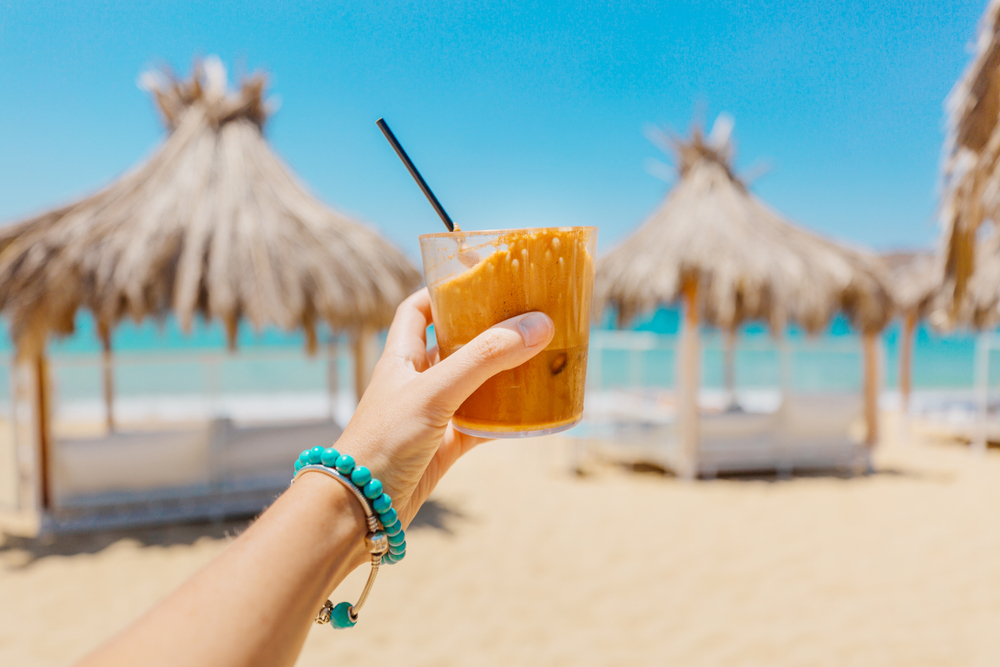 A Cool Cup of Joe: Around the World in Iced Coffee

From Italian affogato to an Indonesian avocado-coffee shake, the world is your coffee cup
BY Kevin Revolinski TIMEJune 26, 2022 PRINT

True enough, but much like the toast, there can be so many other ways of putting it together. Here are just a few takes on the cool cup of joe from other parts of the world.

The first iced coffee was said to be mazagran, a blend of coffee syrup and water served to French troops in colonized Algeria and named for a fortress or battle there. It’s not really so common in either France or Algeria now, but the Portuguese took the name and turned it into an iced mix of espresso, lemon, mint, and perhaps a bit of rum.

My first time in the Greek Isles, I stepped into a dark taverna seeking shelter from the relentless sun, and asked for something cold to drink. Frappé? A sweet, cold coffee sounded pretty good. But when I saw it being made, I was shocked. Spoonfuls of Nescafé powder? That instant stuff I cringe at?

The word frappé derived from French and referred to ice-chilled beverages, and coffee found its way onto the list in the 1800s. But the Greek café frappé was first made with instant coffee in 1957 by a representative from—unsurprisingly—Nescafé. It’s simple, fast, and delicious, made with coffee powder, sugar, water, and milk (fresh or evaporated). Mix it in the glass if you’re in a hurry or use a shaker with ice and get some foam on it for the visual appeal.

From the Italian word for “drowned,” an affogato is a dessert coffee that drowns a scoop of gelato al fior di latte with a double shot of espresso. If you have no gelato, vanilla ice cream is the typical substitution.

Originally from Sicily, this icy treat comes in a variety of flavors: Almond or lemon are quite popular, but so is coffee. You can make it at home with 2 cups of strong coffee or espresso with 1/2 cup sugar dissolved into it, plus an ounce of coffee liqueur. Pour that mixture into a 9-by-13-inch cake pan and place it in the freezer. After about half an hour, take it out and flake through it with a fork to stir up any ice crystals attaching to the pan, then return it to the freezer. Repeat this process every 20 minutes or so until you end up with a perfect coffee-flavored slush to be served in a cup and eaten with a spoon.

Oliang, or strong black coffee, is easy to find at street carts in Thailand. It’s an unusual blend, incorporating Robusta coffee beans (as opposed to the popular Arabica) roasted along with added grains or seeds and brown sugar. It’s sold coarsely ground.

The method involves a cloth “sock” filter holding the grounds while hot water is poured through into a large vessel, and that in turn is poured through again a couple times. The final strong brew is poured over a glass of ice and sweetened with sugar or condensed milk and often a splash of evaporated milk.

The practice of adding grains at the roasting process dates back to tough times when vendors needed to stretch the beans. However, this added flavor became the norm.

Vietnamese iced coffee (ca phe sua da) is as much a drink as a process, which calls for a phin filter: a little metal cup with a filtered bottom and a loose metal filter inside as well. The whole thing sits on top of a glass. Condensed milk is spooned into the glass. The grounds are added to the filter and that in turn is set upon the glass for hot water to be slowly poured through. Stir up the result and pour that over a glass of ice.

Tracking your calories or caffeine intake? You might want to skip this one. This magical mix of coffee, chocolate, and cola isn’t pulling any punches. This recipe makes almost a quart, so bring friends: Take 1 cup of double-strength coffee—espresso, filtered, instant, as you prefer, but a blend with Robusta is suggested—and mix it with a 12-ounce can of your preferred cola, and 3 cups of chocolate milk (3 cups milk plus 4 ounces chocolate syrup). Serve over ice, adding whip cream or ice cream on top in case the drink itself weren’t already rich enough.

In Indonesia, es kopi susu—iced milk coffee—varies depending on where you find it. But the basic recipe puts condensed milk in an iced glass of cold-brew coffee, espresso, or tubruk—just boiled water poured into a cup of coffee grounds with sugar, stirred, and then allowing the grounds to settle to the bottom à la Turkish coffee.

But here’s a twist—jus alpukat. Take a full cup of strong coffee, add condensed milk to taste (1/4 cup to start), and … half of a medium-sized ripe avocado. Put it all in a blender with ice and a teaspoon of vanilla, and blend until smooth. You can stretch this with extra milk or add a sprinkle of cinnamon, or even swap coconut milk in for the dairy, and sweeten with sugar if needed.