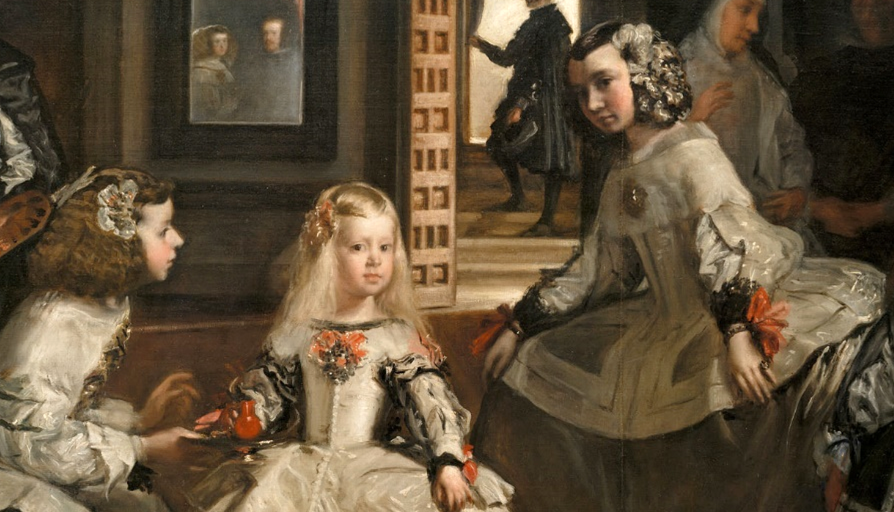 A Charming Gift for His King: ‘Las Meninas’

A child’s soft giggle echoes down the palace hall. Heavy skirts rustle. A lady-in-waiting enters and holds the door of the Cuarto del Principe (“Prince’s Room”) in the Alcázar Palace in Madrid, Spain.

In comes a 5-year-old child, royal to be sure, to the spacious studio of the court’s chief painter, the eminent Diego Velázquez (1599–1660).

Like any palace of a 17th-century monarch, the court of Philip IV bustled with activity and his court painter was part of this. In his most famous painting, Velázquez depicted an informal family scene that was sure to please his king.

How could it not, when the central figure in the painting was the king’s own daughter and heir, the Infanta Margarita Theresa. The painting, considered the artist’s masterpiece, presents a casual scene of the infanta and her entourage that today we call “Las Meninas” (“Maids of Honor”).

But we’ll soon notice that there is much more to this great work of art.

As the king’s friend, Velázquez wanted to please Philip, who was weighed down by the problems of state, and make him smile. Conscious of his kingly dignity, Philip was said to have been seen to laugh only three times in public, but he was known to be naturally kind, gentle, and affable.

And the king had a keen sense of fun; he was known to attend lighthearted literary salons in Madrid featuring readings of humorous poetry. The artist shared this affability, and he and the king developed a strong bond and relaxed relationship, just as the king’s grandfather, Philip II, had befriended the great Venetian artist Titian.

A story on the website TheArtStory relates that “the royal parents were weary of posing for Velázquez and sent for the princess to amuse them. King Philip IV was an amateur artist and a good friend of Velázquez, and he recognized this busy gathering as a special moment.”

The painting shows the infanta, who seemingly makes an unplanned visit to the artist’s studio with her attendants: two attentive lady’s maids, two companions, and her mastiff. To the left of the child, her royal maid Maria Agustina Sarmiento offers the child a drink. The other “menina,” Isabella de Velasco, watches over the child solicitously.

On the far right side of the painting are the child’s companions, the German dwarf Maribarbola and the long-haired Italian dwarf Nicolasito Pertusato who mischievously puts his foot on the sleepy dog. The lady-in-waiting, Marcela de Ulloa, converses with the infanta’s “guardadama” (royal attendant), in a low-lit area behind the child.

There are more figures in the background. Standing in a lighted doorway on the right, the chamberlain and relative of Velázquez, Jose Nieto, looks intently at the scene. Then there is a mirror on the left in the background that reflects the figures of Margarita’s parents, Philip IV and Mariana of Austria, who seem to be watching the scene. So, here is grouped in one painting all the most intimate family members of the king, as these personal servants were also considered part of the family.

Part of the Royal Family

In a sense, Velázquez was also part of the royal family, and the artist tells us this by putting himself in this private royal gathering. His self-portrait, on the left in the foreground, shows a very good likeness of the artist at work.

Velázquez passed away about two years after completing the painting. Philip posthumously honored him as a Knight of Santiago in 1658. The badge of office was added later to the self-portrait in “Las Meninas.” Legend has it that Philip, who considered himself an amateur painter, personally added in red the symbol of the order on the chest of the artist’s self-portrait.

Analysts of the painting today allude to the status of the artist in 17th-century Spanish culture: “By placing a rendition of himself as artist into an intensely private scene with his royal subjects, he remarked not only upon the position of the painter as one who is allowed to glimpse moments of intimacy that viewers would not ordinarily be privy to, but to then authentically portray them armed with the artist’s signature tools and techniques of the trade. It is a great testament to the role of the painter.”

Even the darkened paintings on the walls celebrate the art of painting by acknowledging Velázquez’s good friend, Flemish Baroque artist Peter Paul Rubens. The artist met and became good friends with Rubens when he worked for six months at the palace in 1628.

The paintings, although barely discernible, are scenes from Ovid’s “Metamorphosis,” episodes about Minerva and Arachne, and Pan and Apollo. Not only do they honor Rubens but they also allude to the monarch’s bond with heaven. Velázquez had access to the palace’s vast art collection, which held many of Rubens’s paintings.

The painting, 7 by 10 feet, shows Velázquez’s intensely direct style of painting truth that was photorealistic in nature and far ahead of its time. He infused various techniques toward accurately depicting detail and its many nuances—including free, loose brushstrokes; the use of gradients of light, color, and form; and an eye for detail that was unsurpassed by his peers.

Velázquez masterfully used the technique of chiaroscuro, the treatment of light and shadow in a painting to create high contrast, especially on the infanta who receives the most direct light from the only window.

The artist composed the painting to draw the viewer’s eye in and around the composition. His use of diagonals, in the strong line of the canvas edge, for example, draws us in toward the infanta. Vertical planes create a foreground, middle ground, and background to draw our eyes up, then back down, and to create a strong sense of movement.

The Art of Painting a Royal Family

“Las Meninas” is not a royal portrait, but a domestic scene that people outside the palace would not normally see. This painting now allowed the king’s subjects (and viewers today) to see what goes on in the king’s private quarters.

In her “Memoirs,” a daughter of a gentleman of the king’s chamber, Madame de Motteville, who was present at the scene, writes of the young princess: “She is waited on with great respect, few have access to her and it was a special favor that we were allowed to linger at the door of her chamber.”

Something like Johannes Vermeer’s “The Art of Painting,” this masterpiece shows us the importance of the painter’s art, and its value and position in a society’s culture. “This work is a visual argument to the virtue of painting, the role of an artist in finding the jewels of an intimate moment, giving them a sense of life, and expressing them visually for the world to enjoy,” according to TheArtStory.

The painting has had several names. In 1666, shortly after its completion, it was called “Portrait of the Empress With Her Ladies and a Dwarf,” in 1734 “The Family of King Philip IV,” and before its present name, “The Family.”