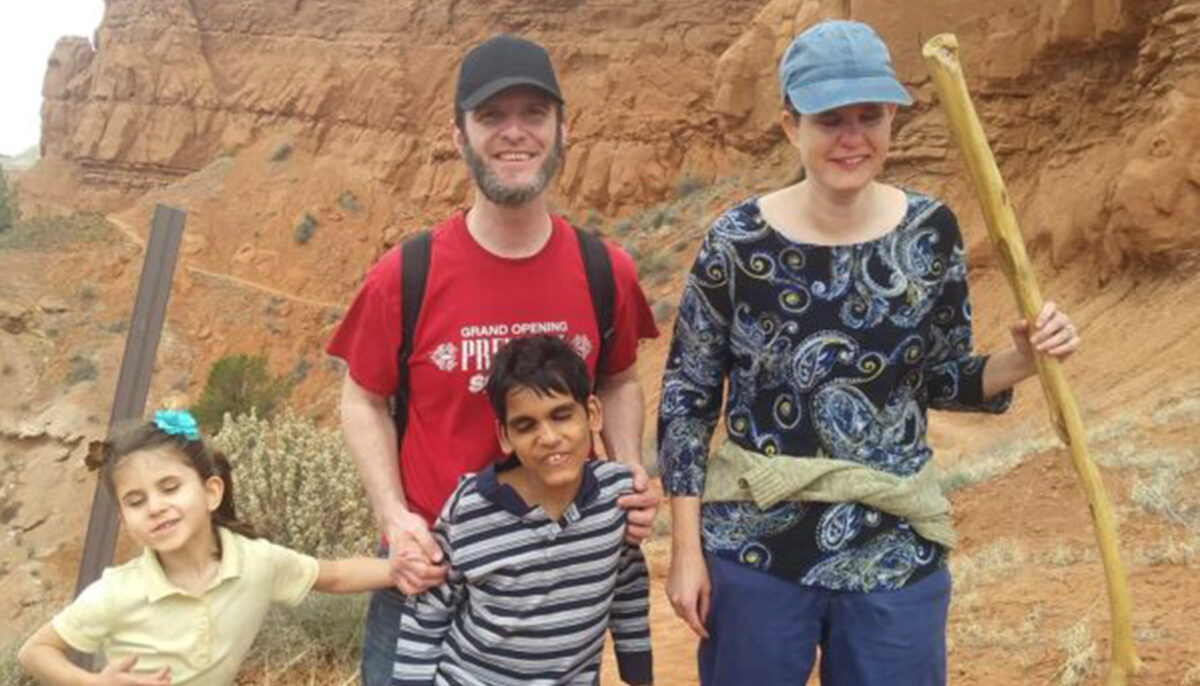 Writer and mother of two, Ashley Wayne, from Utah, has been defying conventional wisdom since she was young.

When Ashley was born, her survival seemed bleak. However, she beat the odds and went home with her parents a few months later. Not long after, Ashley lost her sight completely and grew up blind.

However, Ashley didn’t let her circumstances hold her back; she thrived academically and went on to earn a Master’s degree in social work from Florida State University. Now a mother who is raising two blind children along with her sighted husband, Ashley shares her story of faith and resolve with The Epoch Times.

The news was grim for Ashley’s parents, Kevin and Rhonda Skellenger. “When my mother was in labor, most of the nurses, to her recollection, were not expecting me to be born alive and she was told as such,” Ashley recollected.

Ashley was born three months premature and weighed 2 pounds 1 ounce (approx. 936 g). In addition to her very small size, she also had heart issues and was not expected to live.

After her birth, Ashley was transferred to the NICU, where she spent over three months. While her parents were delighted to be able to take her home, it soon became clear that her prematurity would have permanent ramifications to her health. A few months later, Ashley’s parents noticed that her eyes were no longer tracking, and that month she was diagnosed with a condition called retinopathy of prematurity, which caused unwanted blood vessels to grow in her retina.

“Both the retinas had detached from the optic nerve and I had no sight, not even light perception,” Ashley said.

She then underwent an experimental surgery with the hope of restoring her vision. However, the surgery was unsuccessful, and Ashley has been totally blind ever since. While she never recovered her sight, Ashley showed academic aptitude early on.

Success at School and Work

Ashley then learned to read braille and how to use a cane, as well as other such alternatives to living a life without vision. However, her struggles weren’t related to keeping up academically; rather, they came as a teenager during middle and high school years. Recalling her emotional struggle, Ashley said: “I resented my blindness and saw it as a barrier to acceptance and friendship. This led me to become rather militant, in my early college life, to anyone who I perceived as patronizing or thinking less of me because of my blindness.”

Growing up, Ashley began to feel that she had to be completely independent as she had to “represent blindness well,” showing sighted people that she could do everything they could and needed no assistance from them. Over time, however, Ashley came to realize that “the attitude of assuming the worst of sighted people and that I had to do everything well all the time, was an exhausting and unrealistic way to live,” and that needing help was okay and could be a good thing.

Meanwhile, Ashley persevered and thrived. During summers in college, she worked at a resource center for the blind and visually impaired near her hometown, and helped run a summer camp for blind children and their sighted siblings. “I am still friends with some of those kids and seeing their accomplishments is exciting and rewarding,” Ashley said.

After college, she became a case manager at a faith-based homeless shelter for families and single women, being the only visually impaired employee working there. “I was able to see and be a part of many people’s journeys through commitment and hard work, to change their situation and no longer be homeless,” she said.

Facing Trials and Triumphs as a Family

In 2004, Ashley met Luke Wayne, a family friend, and developed a strong friendship with him. Not long after, they started dating, and four years later they got engaged.

The couple, who has been married for the last 11 years, hoped to start a family. Ashley said, “we believe children are a blessing from God and part of the reason for marriage.” However, they had trouble conceiving and were dealing with financial issues, which then delayed things.

But adoption had long been an option for the Wayne family in addition to having their own children. “Luke had relatives who had adopted and I had worked for a time in a group home for foster children, so adoption was on [sic] our hearts,” Ashley explained.

The couple started their adoption process by looking in the United States before some friends suggested to consider adopting children with special needs from abroad, particularly blind children. Ashley said, “we by no means thought we would be perfect parents but we wanted to be a home for kids if we could.”

Thus began Ashley’s biggest adventure yet, becoming a parent to two blind children, Lexy and Jon, both of whom were from Bulgaria. However, bringing them to the United States took lots of time, money, and patience.

Both the children had to overcome the difficulties of their past orphanage life. But Ashley has had the amazing opportunity to be with them as they have progressed and grown. In addition to being blind, Jon struggles with cerebral palsy. When he came home, Ashley shared, “he was not walking, spent most of his days on a couch listening to only the radio, had little education to speak of, only ate runny soup and was nervous to use his left hand.”

However, with the help of his parents, Jon can now walk and jump without support and “is also learning to play piano and has a gift for music.”

Lexy, on the other hand, despite not being able to walk when she arrived to be with family at 2 1/2 years old, is now “excelling in gymnastics and often impresses her teachers with her upper body strength.” Both the children are learning to read and write in braille and are doing well in Maths, Geography, and grammar.

As a parent, Ashley hopes to instill traditional family values in her children by teaching them to start with simple things, like helping around in the house. In addition to that, she said, “I hope they will be kind and respectful, yet not back down from difficulty or adversity. I hope they will learn to do hard things.”

“I hope to teach them the beauty and value of family as God has defined it and to appreciate the differences between men and women,” she further added.

As a mother who is parenting two blind children, Ashley wants everyone to know that her kids are just like any other kids. “They like to play hide and seek, tag, and on playgrounds, just like any other child,” she explained. Her advice is that “if you happen to meet a blind person, just treat them as you would a sighted person.” While she now appreciates the value of help from others, “don’t just assume [people with disabilities] need help and act on that assumption without asking first.”

Ashley has chronicled many of the ups and downs of international adoption and parenting as a blind person on her Facebook page, “A Blind View.” On Oct. 12, 2019, she announced that the family is scheduled to welcome their third child in April 2020. This time, however, there’s a difference, as the Wayne family will be raising a sighted child.

While she doesn’t have any experience in the area, Ashley might follow her own advice on dealing with challenges. “There’s no one way to deal with a challenge, as long as tasks get done, that’s really all that matters in the end.”