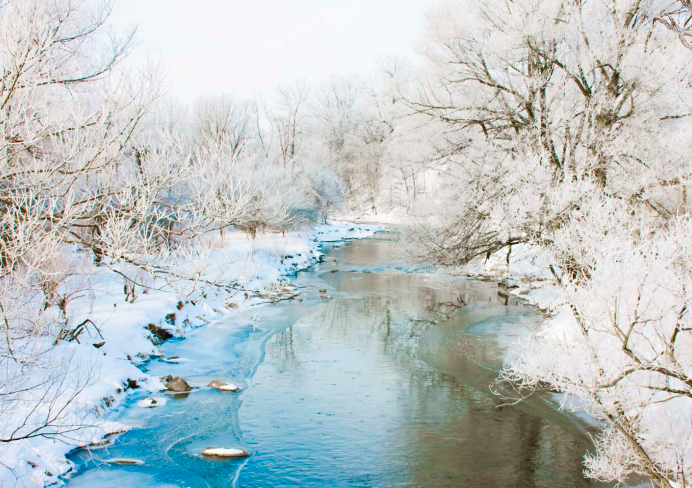 A winter landscape, still as it may look, is host to many different sounds. (Heidi Brand/SHUTTERSTOCK)
People

A Berkshire Journal: The Many Sounds of Winter

The recent full “Wolf” moon, as it is called in January, hung close to earth for a time in deep blood-red this year, while it eclipsed. A giant pendant, suspended in a haunting, warm, hue that belied the sub-zero temperatures of the Berkshires held beneath it. It lent an eerie glow to the frozen stillness. A silence only sporadically broken by equally eerie, sounds. Freezing sap in trees forced pressure and ripped like shots fired through the dead cold of the night here and there, as bark on trees exploded. A thin moan of water in the stream, as it gave up its movement to the grip of ice. The sharp smack of pine cones landing, then skidding briefly, after hitting the hard, white, ground.

It is very, very cold tonight. I imagine pipes are freezing all over the place. Plumbers are bracing themselves for the inevitable flood of early morning calls as they head to bed, earlier than usual.

The farmer has brought his boots to the fire so that his feet, at least, will feel less of a shock when he heads out to milk the cows in the morning. Furnaces fire up once with a purposeful click, and hero on in a steady hum through the night.

In the morning, ice-scrapers form a grating percussion section up and down the road as they scratch across ice-coated windshields. A humming orchestra of motors warming up. Down the street, an engine that fails to start repeats its whining attempts, slowing turn by turn. All efforts ending finally, in a weary tick and hiss. Children’s feet shuffle on cold pavement as they hurry down the road. They wait numbly for the school bus, rocking slightly from side to side in their boots at the curb. Their usual lively chatter is silenced, chins tucked deeply into scarves and collars of coats.

Even a determined warm front has its work cut out, to push through a cold this dense. But three days later, it does.

You can almost hear a collective, audible, exhale, breathing throughout our little town.

I live between two ongoing concerts, in the winter months. One that happens in the forest to the west of the house, and the other to the town side, at the east. The composition varies from year to year, depending on the weather. This winter is an accordion of extremes, fluctuating dramatically in contractions and expansions. No sustained middle chord to relax into, for any length of time. But even in the short period between cold fronts, nature picks up where it left off, doing its best to keep to its calendar.

The Code of the Woodpeckers

You begin to hear them clearly at this time, early in the morning. At first just one, but soon another follows: The sharp, strident drumming of woodpeckers echoing through the deeper corners of the forest. Unsynchronized, yet announcing themselves in emphatic rhythm.

I picture them, in all their Pileated, Red-bellied, and Downy feathers, beaks slamming purposefully into trees. Those we hear now are the hearty renegades who chiseled away through fall and hollowed out their winter roosts in snags, and trees. These hunkered down, instead of flying south. Emerging from all their cozy cavities, they head straight to task. Perimeters must be established—no time to waste! This is the current conversation. A primal yet precise, morse code of the late-winter forest.

We may go and listen for them again, my godson and I, during these slightly warmer days. We will put our ears against tall trunks of bark-less trees, riddled with holes they’ve made. Or we will walk further in, and leave the trail. To find magical shapes of wizards and kings in the ghost-like patterns of ice, at the edge of the stream, and hear its lively song, as it trickles brightly again around the frosted rocks. The dog will be happy to run without freezing the soft pads of his paws. Birds at the feeder will feel less anxious. They will chirp again every now and then, as they flick adeptly emptied hulls of millet seed with a light tap against the window, and to the ground. We will all relax for a bit, in this warmer intermission before the next deep cold settles in.

I hear the welcome ticking prattle of a diesel engine, backing slowly down the drive. A straining whine as the trailer hoists its heavy load. The subtly bright thud and clunk of firewood hitting the ground is by far the best sound I’ve heard today. I have just added the last log I had left, to the fire. The last few days have revolved around the steady task of feeding a voraciously hungry fire and maintaining the primary heat source of our champion woodstove until the plumbing is updated next spring. I throw on a jacket, grab a container of freshly-made chicken soup, and head out to greet the dependable soul who always shows up, just at the right time. Now, it can get just as cold as it wants again. And the good man will have hot soup for supper when he gets home, while we all brace ourselves for the next cold front.