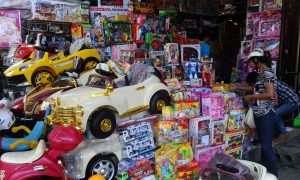 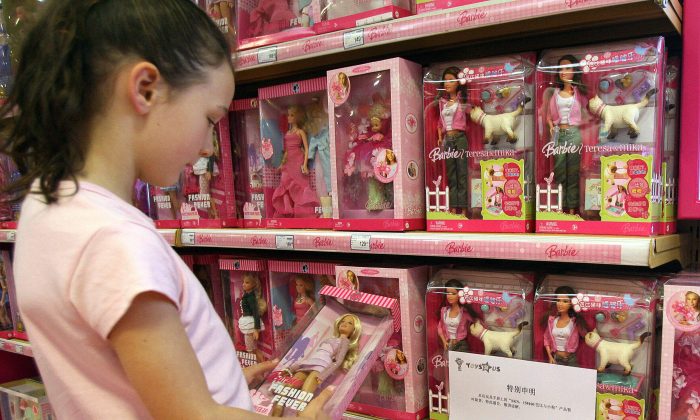 A young girl holds a Barbie doll next to a notice saying that the toy 'Barbie and Tanner' made by US toy giant Mattel, which has just been recalled in the US, is out of stock at a Toys 'R' Us store in Shanghai, 15 August 2007. (MARK RALSTON/AFP/Getty Images)
Family & Home

9 Reasons Not to Give Your Kids Toys Made in China

Around 80 percent of all toys sold worldwide are manufactured in mainland China.

Often, the public will not know that a toy is dangerous until a child gets hurt, or a complaint is investigated and a subsequent recall is publicized.

More than 31,000 units of rubber critter toys made in China were recalled in the United States due to paint contamination in August last year.

BSN Sports sold the toys from February 2017 to June 2018. They came in a variety of animal models and are primarily used in physical activities such as tossing games.

“This new incident of mass lead contamination in toys in 2018 highlights how lead contaminated children’s products are still reaching store shelves and getting into the hands of children,” according to a report by the U.S. Public Interest Research group.

No safe blood lead level in children has been identified, and exposure to this chemical can affect nearly every system in the body, the U.S. Centers for Disease Control and Prevention has warned.

The recall of rubber critter toys harks back to the 2007 mass recall of 19 million toys made in China, of which half were distributed in the United States. The toys were designed by Mattel, the nation’s largest toy company.

Among the recalls were Barbie and Tanner play sets, Polly Pocket dolls, and various action figures.

18.2 million of the total number of toys contained small, powerful magnets which could come loose.

“Magnets found by young children can be swallowed or aspirated. If more than one magnet is swallowed, the magnets can attract each other and cause intestinal perforation or blockage, which can be fatal,” according to the U.S. Consumer Product Safety Commission.

The remaining recalls consisted of 436,000 China-made die-cast toy cars depicting the character Sarge from the animation film “Cars”, which were covered with lead paint in levels exceeding federal standards.

“No system is perfect,” Robert A. Eckert, Mattel’s chairman and chief executive told the New York Times. “There’s no guarantee that we will not be here again.”

What's truly shocking about this is that Canadians bought over half a million of these… we were you all thinking? pic.twitter.com/yPn17k3DYS

It was revealed that 516,000 China-made skip balls sold between January 2012 and July 2018 in Canada needed to be recalled following a discovery that levels of phthalates (PVC) exceeded the regulated limits.

Children who suck or chew on these toys which contain endocrine disruptors can develop reproductive and developmental problems.

Metal jewelry worn by children have been found to contain high levels of lead.

In 2007, about 103,000 multi-colored necklaces, bracelets, charms, and earrings imported by Tween Brands Inc. of New Albany, Ohio, were affected. They were sold nationwide at Limited Too and Justice retail stores.

Some of the jewelry advertised “High School Musical”, while others had simple charms changing from chains or cords.

Popular among Christians are children’s necklaces adorned with a fish symbol, and about 132,000 were found to be contaminated with lead in 2007.

In the same year, 300,000 silver-colored rings were found to contain high lead levels. 200,000 pieces of jewelry imported by Spandrel Sales and Marketing Inc. of Tempe, Ariz. were similarly tainted, and were mostly sold in vending machines for 25 cents—a bargain to die for.

In 2016, a company was fined $23,400 for selling Chinese counterfeit toys destined for the Christmas market in the United Kingdom.

Among the 3,700 items seized, the Spiderman toys contained a small, loose suction cup which posed a choking hazard to small children.

Some 6,400 childrens’ bicycles manufactured in China were recalled in the lead up to the 2009 holiday season due to a stem failure which causes the rider to lose control.

Though not a toy for children, Chinese-made baby strollers made the list as close to one million models were recalled in 2009 when at least 12 infants reportedly had their fingers amputated after they were caught in the hinges.

The U.S. Consumer Product Safety Commission warned that recalls concerned models as old as those sold in 1999 in stores including Target and Babies R Us.

Some 641,000 pacifiers manufactured in China were recalled in 2009 because they posed a choking hazard.

9. A Study on Toys Sold in China

In a 2011 study by researchers from Greenpeace and IPEN, 500 toys and children’s products across five Chinese large cities, including Beijing, Hong Kong, and Shanghai, were tested for contamination.

They discovered that 32 percent of the toys were tainted with either lead, arsenic, admium, mercury, antimony, or chromium. Each metal can cause permanent damage to a child’s nervous and immune systems.

Not only could these toys poison children when touched or ingested, these metals can enter the body through the air they breathe, according to Ada Kong Cheuk-san, a Greenpeace campaigner.

Some of the toys tested belong to brands sold outside of China. Two toy cars made by Mattel, branded Hot Wheels and Speed Machines respectively, were found to contain arsenic. It is unclear whether these products were made by the same factories that produce toys for the overseas market.

In response to the study, the owner of Rongjun Toys Industrial told the South China Morning Post that she was shocked that one of her products, a toy car, had been named for containing excessive levels of lead, saying that the toys “should” be free of heavy metals.

For more information about potentially dangerous toys and how to protect your children, visit the U.S. PIRG’s annual report “Trouble in Toyland.”