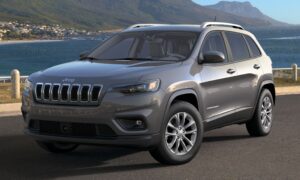 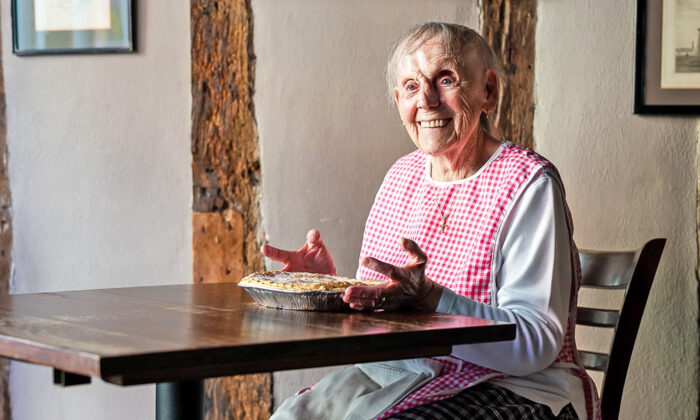 An 89-year-old great-grandmother who started baking pies for the vulnerable and elderly during the CCP virus pandemic has become a social media star for her sweet act of kindness.

Flo Osborne lives in sheltered accommodation in Dovercourt in Essex, England. She started baking apple, cherry, and savory steak pies in her tiny home kitchen for a local charity, North Essex Support Team (NEST), and it fast became her new daily routine amid the lockdown during the outbreak of the CCP (Chinese Communist Party) virus, commonly known as the novel coronavirus.

NEST, an organization that provides support and donations of household items free of charge for families and individuals in need, distributes the pies among the elderly and vulnerable adults and children as a part of its hot meals program.

Flo, who makes every pie from scratch, grew up watching her mother bake and is now just following in her footsteps. Today, Flo’s family runs a restaurant, Samuel Pepys, and the kindhearted woman has made hundreds of pies since April 2020.

Her proud son, Graham, was brought up on Flo’s homemade pies. “To watch her make them is unreal,” he told BBC; after mixing lard, margarine, flour, and cold water for the pastry, his mother “bangs it out and they’re done, and they’re perfect.”

Firefighter and NEST manager Les Nicoll also took to Facebook in October 2020 to tell the world about the charity’s oldest baker.

“This is I believe a remarkable act of community kindness, also a huge victory over age and supposed infirmity,” wrote Nicoll. Struggling to get Flo’s story into the local press, Nicoll implored, “I am asking you to share … and make the amazing Flo a social media hero.”

It worked; the heartfelt post was shared by more than 735,000 people. Photographer Belinda Grant, seeing Nicoll’s post, reached out and arranged to spend the day with the 89-year-old baker.

Calling Flo “truly a local hero and a national treasure,” Grant documented their day in a series of photos and a film sharing the story of Flo and her special pies.

Flo admitted to Grant that “there’s no secret” to how delicious the pies really taste, and she gets the ingredients of the pie with support from her family.

Flo admitted to The Daily Mail that she loves baking these pies. “It keeps me going … Some people say I’m mad, but I just tell them that I love to help other people. If I can help them, I will.”

Nicoll estimated that NEST receives around 20 pies from Flo every two weeks. Each pie makes 16 servings. “But she’ll always make extra pies so that our volunteers can enjoy them, too,” he added.

Rashford, who earned an MBE for his #EndChildFoodPoverty campaign, brought Flo to the attention of his 3.7 million Twitter followers.

Prime Minister Boris Johnson wrote to Flo personally to thank her for her contribution, also naming her a “Points of Light” honoree.

“I was amazed to hear of your extraordinary one-woman bakery,” wrote Johnson. “I know you do this with no thought of recognition, but you deserve every word of praise.”

Flo’s charming response was the following: “I can’t understand what all the fuss is all about!” adding, “All I’m doing is trying to help the old folk.”

Share your stories with us at emg.inspired@epochtimes.com, and continue to get your daily dose of inspiration by signing up for the Epoch Inspired Newsletter here: theepochtimes.com/newsletter