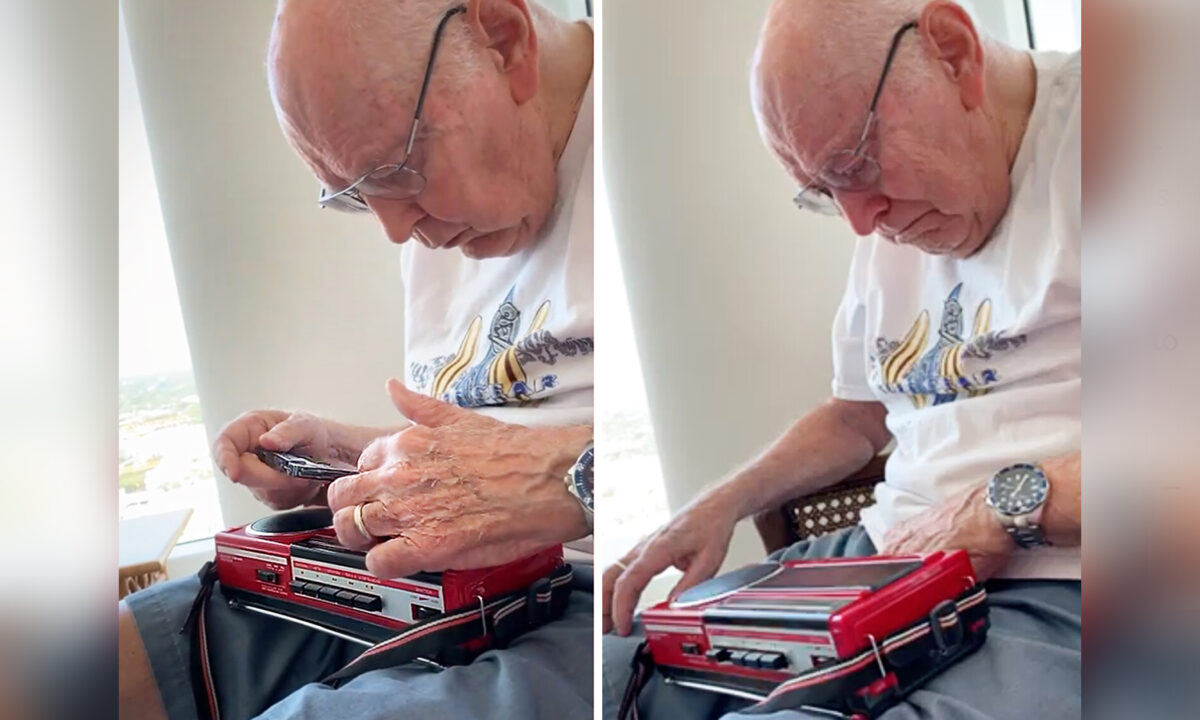 A man in his 80s relived a bygone memory of his late mom when a house-decluttering unearthed a cassette tape from 40 years ago.

The tape, which was found in an old dresser, was labelled simply, “Warren Beck, Love You, Mom.”

That man, Warren, now 85, saw that the tape was addressed to him. And playing the tape for the first time in May 2021, he was moved to tears.

Warren and his wife Marva, from St. Petersburg, Florida, had had their daughter Melanie over to help with chores, as Warren has Parkinson’s, making such work difficult for him.

“I went out there to help them and my mom had a dresser that she wanted cleaned out,” Melanie told The Epoch Times.

“I just started cleaning up the dresser and I found all sorts of things … all these fun little things. And then I found a cassette tape.”

She was surprised when Warren said he did not remember the tape, but he didn’t waste a second. He wanted to hear what was on it.

As Melanie was holding old slides up to the light of the window, reliving childhood memories of her own, her father got out a cassette player.

“And that’s when I realized this was going to be a pretty touching moment.”

Warren had expected “some very lovely tunes and some very pleasurable hours ahead,” he said.

Meanwhile, his daughter pulled out her phone to record what happened next.

He put in the cassette, pressed play, and they soon started hearing his mother’s voice singing old songs from the 1920s that she used to croon to him as a child.

Spellbound by memories, Warren began to hum along dreamily, and was even moved to tears.

Among the tunes she sang were Billy Jones’s “Yes! We Have No Bananas” and Frank Crumit’s “Thanks for the Buggy Ride”—tunes she once sang with her own mom growing up in a railroad station in Utah, where her dad worked. Warren, born in 1935, had never met his maternal grandparents.

She recorded that tape some 40 years ago.

“I don’t remember much, but I do remember her singing when I was a young teenager,” Warren shared. Hearing her comforting voice again, he said he felt “a warm connection” with her.

Marva told Bay News 9 that nobody could have had a sweeter mother-in-law. The 24 hours after the tape’s discovery were emotional.

Later, inspired by that tape, Warren, together with Marva, decided to record a message for their own five children—Melanie, Mark, Scott, Todd, and Warren—ahead of Mother’s Day.

“I’ve had a wonderful life with this man,” said Marva. “But the best thing we ever did was being parents to all of you. Thank you for being such amazing children.”