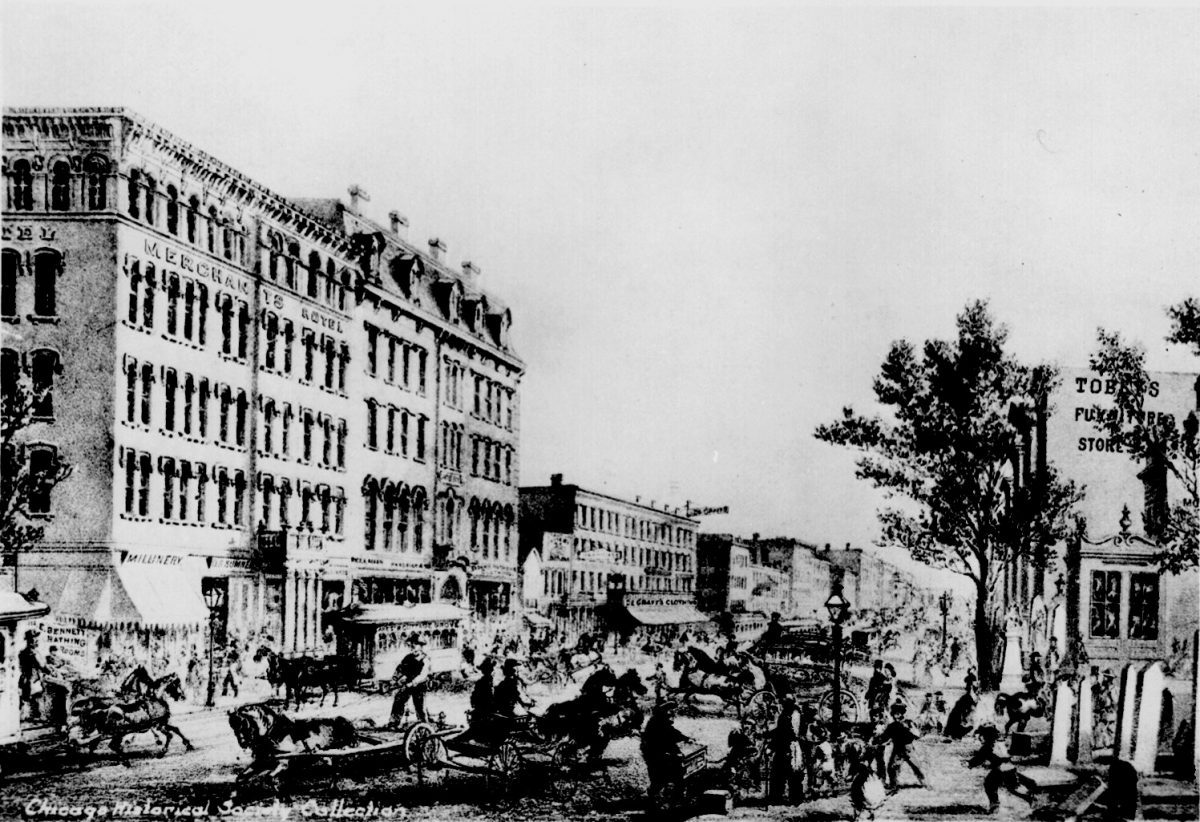 Chicago before 1868, looking north from State and Washington Streets. The buildings, streets, and sidewalks were raised by several feet starting in the latter half of the 1850s. (National Archives and Records)
People

7 Mind-Blowing Facts That Sound Like Bunk, But Are True

1. The Entire City of Chicago Raised

Gradually, and unbeknownst to many people in Chicago, entire buildings and sidewalks were hoisted up on jackscrews to lift the city and its residents above a disease-infested swamp developing in their midst.

In 1855, engineer Ellis S. Chesbrough from Boston hatched the plan.

The buildings and roads were raised several feet, leaving room below for a sewage system to prevent further mire from sinking the city.

Tremont House hotel was hoisted with many guests inside unaware they were rising. The hotel, covering about an acre, was inched up daily by about 500 men with 5,000 jackscrews until it eventually rested six feet above ground.

Public structures and streets were taken care of by the city, but residents had to rise above the muck themselves. Many built new entrances on their second floors and used the ground floors as basements.

Some literally moved their businesses and homes, opting to roll the the buildings vertically to another location rather than raise them up.

Chicago Mag illustrates the move in a comic strip.

2. Fedex Formed on a Gamble

Fred Smith’s business stood on its last legs; he walked those legs to the casino. The business’ last $5,000 hit the blackjack table. Smith walked out with $27,000 and used it to form the multi-billion dollar courier business Fedex.

Robert Frock, a Fedex founder, described his dismay at learning how Smith got the funds in his book, “Changing How the World Does Business: Fedex’s Incredible Journey to Success – The Inside Story,” cited by the Huffington Post: “I asked Fred where the funds had come from, and he responded, ‘The meeting with the General Dynamics board was a bust and I knew we needed money for Monday, so I took a plane to Las Vegas and won $27,000.’  I said, ‘You mean you took our last $5,000—how could you do that?’ He shrugged his shoulders and said, ‘What difference does it make?'”

Neville Ebbin was killed by a taxi in Hamilton, Bermuda, in 1975 while riding a moped. On the same date a year later, 50 minutes off the mark of the time when Ebbin was killed, his younger brother was hit and killed by the same taxi driver. The same passenger was in the car during both fatal hits. The two brothers were both 17 when they were killed. They were both riding the same moped. They were on the same street.

4. A Gust of Wind Saves an Empire State Suicide Jumper

On Dec. 2, 1979, Elvita Adams, then 29, attempted to take her own life by jumping from the 86th floor observatory Empire State Building observatory in New York City.

A strong gust of wind came up beneath her and deposited her on the 85th floor deck. She fractured a hip, but was pulled to safety and survived.

5. Nuclear Bomb in a Georgia Swamp

During a 1958 training exercise, a Mark-15 nuclear bomb was irretrievably lost off the coast of Georgia, United States.

“This bomb is about 100 times more powerful than the Hiroshima bomb,” Derek Duke, a retired Air Force lieutenant colonel, told Fox News in 2002. In 2002, Duke called on the government to renew efforts to find it with new technology.

The Air Force has said the bomb was not armed with a plutonium capsule, which would be necessary for it to detonate. Duke and some others remain wary.

W.J. Howard, assistant defense secretary in 1958, said in a letter to Congress in 1966 that the bomb was a complete weapon.

In a book written by Duke, titled “Chasing Loose Nukes,” Howard H. Dixon is quoted. Dixon is a former crew chief who loaded nuclear weapons into planes at Hunter Field, Ga., from 1957 to 1959. He said: “Never in my Air Force career did I install a Mark-15 weapon without installing the plutonium capsule.”

In 2001, the Air Force said in could cost taxpayers some $5 million for the recovery effort. It also said it could be dangerous to disturb the bomb, so it should be left where it is.

6. Russia is Larger Than Pluto

A 3-D rendering of Pluto. (Shutterstock)

7. More Than Half of US Presidents Left-Handed

Since the mid-20th century, half of the U.S. presidents have been left-handed. Due to the stigma surrounding left-handedness, it is unclear how many presidents before that time were left-handed.

In the general population, only one in 10 people are left-handed. Of the 12 presidents since WWII, six have been lefties: Harry Truman, Gerald Ford, Ronald Reagan, George Bush the elder, Bill Clinton, and Barack Obama.

Other presidential candidates have also been left-handed, such as John McCain and Ross Perot.

A Washington Post Op-ed explores the qualities associated with left-handedness that may have helped these presidents gain the post.

Many left-handed people are also skilled in mathematics and problem-solving.