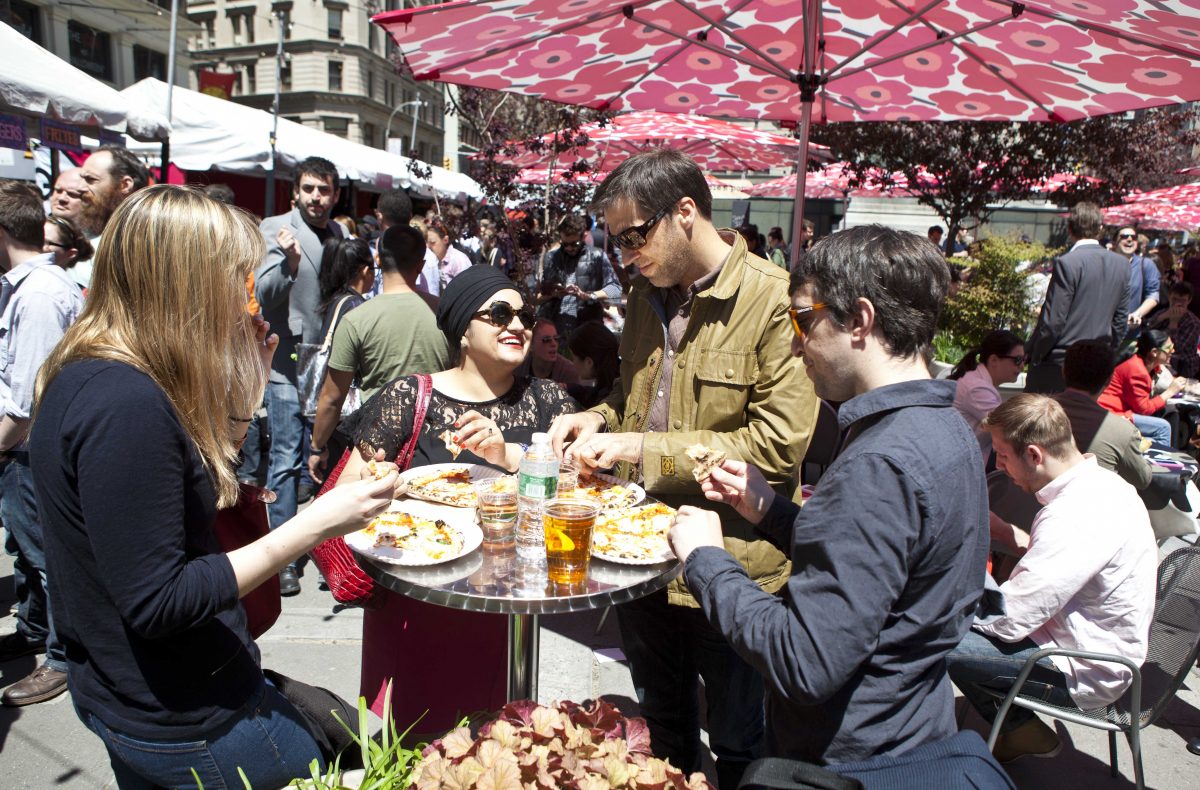 NEW YORK—Spring’s sunnier climes have come right on time to accompany the opening of Mad. Sq. Eats, held for the 10th time, just outside of Madison Square Park. If you haven’t been there yet, make haste before the end of May.

The market runs for just a month, and is a chance for established and pop up venues to try something creative and strut their stuff.

Besides its crepes, Bar Suzette tries to offer something different every time—this time, it’s fish and chips and oysters.

“Instead of trying to do good street food, we just try to do good food on the street,” Lughod said.

This spring sees the return of other veterans like Red Hook Lobster Pound and Roberta’s, who is bringing out a wood-fired oven to cook pizzas to order—each pizza only takes 60 seconds.

How do vendors get selected? The presenters are on the lookout for delicious food (even better if it’s locally sourced) and cuisine that’s not already represented. It helps for vendors to have a strong social media presence and branding.

This year, there are several new vendors offering a wide range of offerings—from Turkish to Korean food.

Chef Joseph Lee (who goes simply by Joelee) says his inspiration is to introduce Korean flavor to the market.

“Giving everybody the flavor of my country and modernizing it a little.”

The flavors are authentically Korean—sweet, savory, spicy— either Korean barbecued beef, pork, or chicken served up in your choice of taco, wrap, sandwich, topped with a spicy sauce and some greens. Joelee’s own favorite is beef, though the big bestseller is pork. The flavors are bold and delicious.

A new addition he’s been playing with are the chicken wings—these are double-fried, true to Korean style, rendering the fat and making for crispier, lighter wings, but a twist here is their flavoring. Joelee used kalbi, which traditionally is used for short ribs. “I just infused the flavor into the wings. You got that sweet flavor, that savory combination, it just goes really well,” he said.

Mrs. Dorsey’s Kitchen keeps it simple by serving up delicious comfort food, specifically grilled cheese sandwiches. To owner Ron Johnson, who named his business after his 80-year-old grandmother, it’s all about recreating something that recalls memories of his time spent with his grandmother.

The sandwiches are toasted with olive oil, herbs, and garlic rather than butter. The results: an aromatic crust that’s golden amber and crunchy. Try Pop’s Original, with smoked gouda, honey mustard, and tomato.

“The whole idea is, New York is a very busy city, you can easily get all these options for food, but sometimes the easiest thing is a grilled cheese sandwich,” said Johnson.

Proof that Mmm is universal across languages … Mmm Enfes means Mmm delicious in Turkish. Using handmade phyllo dough, they turn out savory Turkish pastries. There was the familiar burek (related to the Greek spanakopita) but also the eminently portable gozleme, from Cappadocia, the heart of Turkey.

I had a spinach and cheese gozleme, long sheets that were neatly hand rolled for convenient walking around and looking at yet more food. It was filling and buttery; another popular filling is the parsley and ground beef. A brick-and-mortar operation opened this winter on 39th Street and 6th Avenue.

Chef Leona Sager dreams up and creates the ice cream flavors at Dreamscoops. The current flavors are: sea salt & caramel, dark chocolate, vanilla bean, and strawberry rhubarb ($4 for ice cream, $7 for affogatos). Sager’s own favorite is chocolate; the sea salt & caramel is the most popular. Ingredients are sourced locally; grass-fed milk and cream are used.

Featuring Counter Culture Coffee, Third Rail Coffee brews espresso-based drinks, including affogatos. Short for “affogato al cafe,” or “drowned in coffee,” an affogato is a scoop of ice cream topped with a shot of hot espresso. The ice cream comes right from the next stall from Dreamscoops.

“We were trying it with vanilla bean initially but then tried it with salted caramel and that is to die for,” said Ashley Rodriguez.

The good folks at Sunday Gravy recommend any of their offerings that are served with, well, Sunday Gravy—beef and pork slow-braised on the bone for eight hours, along with sausage, meatballs, and marinara sauce—that means over pasta, in sandwiches, or in a cup on its own. The bruschetta comes with toppings of goat cheese, roasted vegetables, greens, and balsamic vinaigrette.

The nut-free bakery hand ices all their cookies in their headquarters in Long Island City. “Conversation cookies” seem to do just that—start conversations.

Just take a look at those designer shoe-themed cookies! The Color Me line that’s just come out gives you cookies with a royal white icing slate, markers with edible ink, and off you go. They’re great for children’s parties, but the sweet cookies have served to pop some important questions. Recently, a gentleman used them to propose to his girlfriend by coloring on the cookies. He got a yes.

Their red velvet cupcake is, er, more of a sandwich. The top is sliced off, and the cream cheese frosting goes in before the top goes back on.