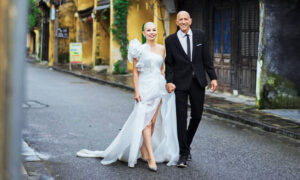 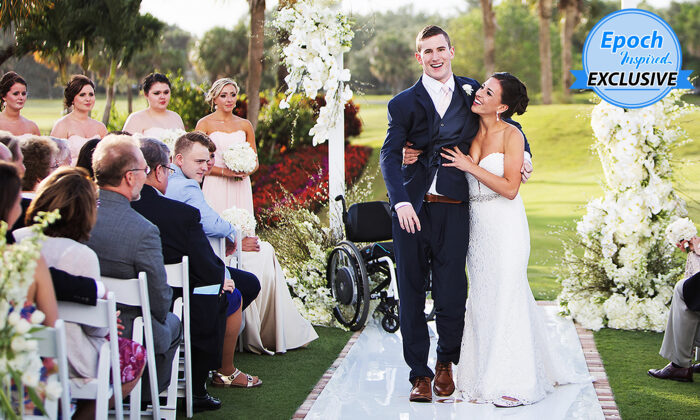 Chris Norton walking down the aisle with his wife, Emily Summers, on April 21, 2018, in Jupiter, Florida. (Courtesy of Sarah Kate/Fotolanthropy)
Life & Tradition

‘7 Yards’: Paralyzed Man’s Journey Down the Aisle With Soulmate and Fostering 18 Kids (Video)

Destined to lead with firm faith and determination, a Florida-based paralyzed man’s love story has been turned into a documentary film, “7 Yards,” guiding others to discover blessings and higher meanings in life’s hardships without losing hope.

Nearly three years ago, Chris Norton walked steadily the precious seven yards down the aisle, arm-in-arm with his beloved soulmate, Emily Summers, leaving the 200-strong congregation in tears of joy.

Chris, once an aspiring athlete, was confined to a wheelchair after a college football accident left him paralyzed below the neck. He thought he’d never find love, let alone walk on his wedding day. Today, Chris, a full-time motivational speaker, and Emily, his beautiful wife and best friend, have adopted five and fostered 18 children from their home in Wellington, Florida.

Talking to The Epoch Times, the couple, both 28, shared how their love and faith helped them brave through life’s challenges and raise their children right.

Every single day, said Chris, “I have to choose faith over fear.”

“I was an 18-year-old kid, grew up in a small town, went to play college football at Luther College in Northeast Iowa,” Chris said, recalling the Oct. 16, 2010, game when he misjudged a tackle.

“I hit him at full speed, full force. But instead of hitting him with my shoulder, I collide with my head … the next thing I know, I’m laying there face down, motionless,” he recalled.

Chris was airlifted to Mayo Clinic in Rochester, Minnesota. He had fractured his C3-C4 vertebrae and was given a three percent chance of regaining any feeling or movement below the neck.

“I started out with nothing,” he said. “My parents and my sisters … they never left my side. I wouldn’t be where I’m at today without them. There’s plenty of nights where my dad or my mom, they would read from the Bible … I just couldn’t sleep. I was just so restless and thinking about my future and so scared.

“I was hopeless, at times … but what gave me hope was knowing that I have God … He can take this mess and this challenge, this hardship, and He can turn it into good.”

After months of hard work, Chris slowly started to regain a little bit of movement in his arms; he finally wiggled his toe on Thanksgiving morning. He returned to college as a sophomore in August 2011.

Today, he uses a wheelchair, but he can walk short distances with the assistance of one person and has enough dexterity to feed himself. He does physical therapy for up to six hours a day.

Like any young man, Chris had always dreamed of having a wife and kids, but after his accident, he felt his hope had “crashed and burned.” Yet over time, he cultivated a new sense of self-worth, and that’s when he met Emily in 2013, three years after his injury.

“We agreed to meet in this public spot, but right by a hotdog stand,” Chris said. “I was in awe of just how beautiful she was and just telling myself, ‘Chris, don’t blow it.’ She just wanted to get to know me for who I was. Emily was that person who I felt so connected with … a special person with a big heart. She believes more in me than I believe in myself.”

Emily calls Chris her best friend. Together, the couple nurtured an unbreakable bond, and started working toward one of Chris’s ambitions: he wanted to walk across the stage at college graduation.

“Chris actually proposed to me the day before,” said Emily. “I was super nervous … but when we got up there, and he started taking a few steps, I just remember looking up and smiling at him.”

The video of the incredible moment was viewed by millions. The couple felt compelled to inspire hope in others by repeating the feat on their wedding day. At their outdoor ceremony on April 21, 2018, in Jupiter, Florida, the couple did just that.

“It was an incredible moment, incredible feeling. I’ve been working seven years to walk seven yards,” said Chris. “I just knew that regardless of what happened, that was going to be okay. Even if I tripped and fell down the aisle, I still had Emily.”

Emily said the biggest things that she loved about Chris are his determination and his work ethic. “He’s always trying to get better. He is constantly doing everything in his power and putting in the work to just get the results he wants … trying to impact others and make the world a better place,” she said.

Bolstered by his ability to help other kids and adults, Chris started the Chris Norton Foundation in 2012 as a way to support people with neuromuscular disorders to gain access to recovery options. The foundation also runs an action-packed summer “wheelchair camp” for kids. The couple has also welcomed kids in need into their very own home.

“We’ve fostered 18 children so far,” said Chris. “They didn’t choose this life, and same with me … we can kind of relate. I believe it was chosen for them and for us to come together.”

Emily shared that while mentoring in high school, she had met a girl named Whittley who was taken from an unsafe home environment and placed in foster care. At 17, Whittley left care and had nowhere to go. She called Emily and Chris, who were in their early 20s. The couple took Whittley in and eventually adopted her.

“So Whittley is our oldest daughter, and she’s literally the reason why we foster why we’ve adopted. [I knew] this is what I want to do for the rest of my life,” Emily said. “I want to help kids in these situations.”

“We love being foster parents,” Emily said. “It’s just amazing to see what love and stability, and helping kids know that they’re safe and special, and helping lead them to God, can do in their lives. I’ve seen God move in my life during hard moments and difficult times. It always amazes me just how He pulls you through, no matter what you go through.”

Chris said: “I’ve shown the kids just through my own actions, that you have to keep moving forward with a positive attitude and just got to put your best foot forward. It is possible to move forward, despite hardships in life, and even use those hardships as a source of blessing.”

Inspired by Chris’s incredible journey, Fotolanthropy, a nonprofit dedicated to stories of hope, reached out, wanting to film a documentary. “7 Yards,” Chris’s life story, is released on Feb. 23 through Amazon Prime, Prime Video, and Apple TV.

Today, Chris, a beloved husband and a doting father, thinks of his spinal cord injury as a blessing.

“It’s led to inspiring other people, it’s led to meeting Emily, led to fostering, even adopting, this film coming out … my motivational speaking … I’m thankful that it’s happened because it’s made me a better person,” he said.

“Hardships can be utilized in a way that can make life that much more meaningful.”