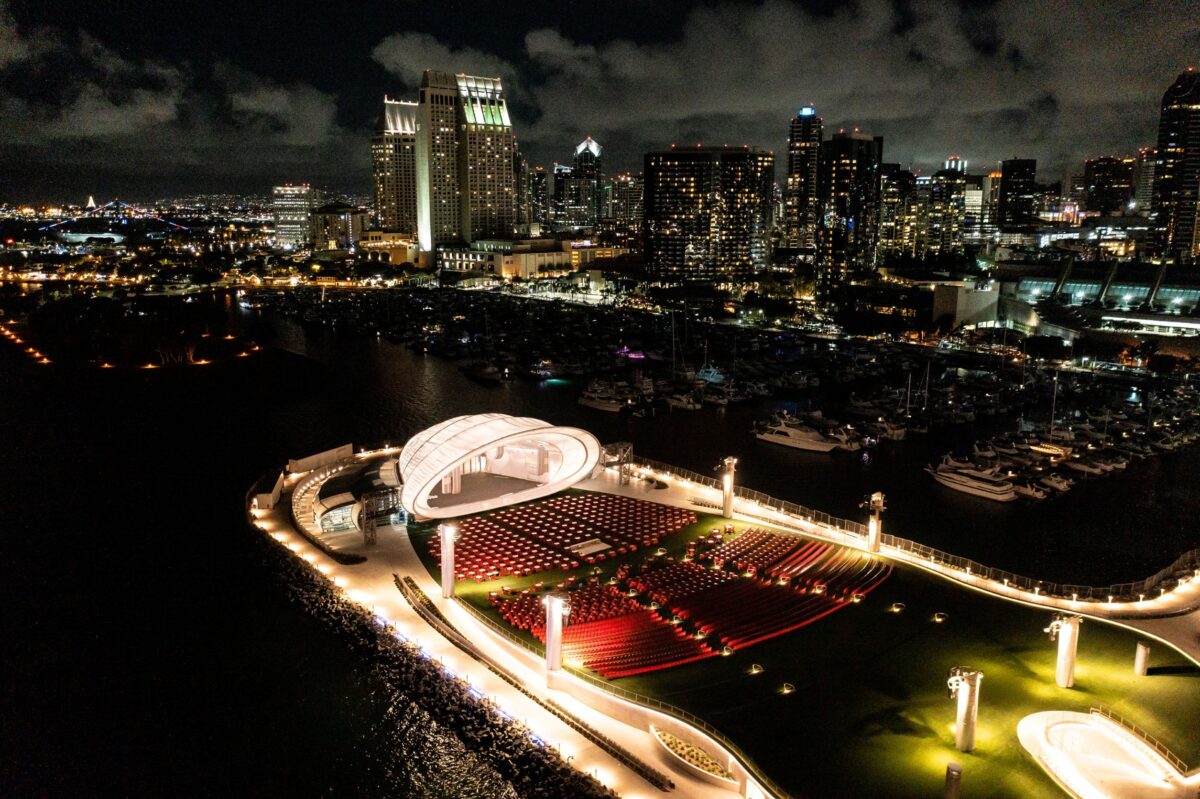 The Rady Shell at Jacobs Park opened on San Diego’s waterfront in August 2021. The Shell is operated by the San Diego Symphony, which will play a summer season with various classical and pop guest performers. (Courtesy of San Diego Symphony/TNS)
Travel

This just in: San Diego does things differently than Los Angeles.

Its downtown sits at water’s edge. It neighbors a foreign country. Its people support fewer major sports teams (one versus nine, countywide) and more military bases (nine versus three).

And instead of tucking its sleek new outdoor music venue into a fetching fold in the foothills, as the Hollywood Bowl’s builders did in L.A. a century ago, the San Diego Symphony plopped it down on the waterfront. At the edge of downtown.

So when you sit in one of the red folding chairs or flop on the artificial grass of the Rady Shell at Jacobs Park, you may be distracted by passing sailboats to your left. Or jutting skyscrapers to your right. Or the sun sinking into the harbor.

You don’t hear many helicopters or sirens (well, I didn’t on the May night when I caught the orchestra playing works by Grieg, Rimsky-Korsakov and Bacewicz). A breeze comes off the water. The Shell’s layout is flatter than the Hollywood Bowl’s, and simpler. And everything is closer together.

For an Angeleno, this new venue is a fascinating combination of familiar and novel. And that’s not a bad place to start when constructing a weekend away. Here are seven things to know before visiting the Shell.

The Shell, designed by Tucker Sadler Architects, looks like a giant clamshell with LED lighting. It stands on a 3.7-acre finger of land that reaches from downtown’s convention center into San Diego Bay. A few blocks to the north stands Petco Park, home to the Padres. To the south, across the water, there’s the almost-island of Coronado (whose ferry will drop you next to the Rady Shell).

The San Diego Symphony, which partnered with the Port of San Diego on this project, raised about 96% of its $85 million cost. The complex includes the performance venue and adjacent eating and drinking areas. Most of the park is open to the public most of the time, including morning yoga sessions.

2. There Are No Box Seats

The Shell’s seating is all folding chairs, which can be reconfigured (or carted away entirely) to accommodate crowds from 2,000 to 8,500, prices $20-$275. Over the venue’s first 28 concerts, average attendance was around 3,100. For the symphony performance I saw, the closest seats to the stage, the Marina area, were arranged with four-top tables, so people could eat before or during the performance. The price: $108 per person.

The Lawn section in back, first-come, first-served, is an elevated grassy expanse where up to 300 visitors can lay out blankets or beach chairs. (It was $20 per person for the performance I saw.)

But when pop acts rent out the venue, everything can change. For Olivia Rodrigo’s sold-out show on May 18, management pulled all the tables and chairs out of the way to make more room for the general admission crowd of 8,500.

3. Unlike at the Bowl, You Can’t Bring Your Own Picnic

The symphony people are eager to sell you dinner. Choices include pizza (Biga) and tacos (Lola 55), which you can eat in venue-adjacent Prebys Plaza or carry to your seat. There are also food cart soups, popcorn and picnic boxes. If you’re sitting in the Parkside or Marina sections, you can order in advance from a menu devised by chef Richard Blais and waiters will bring the meal, or drinks, to your table.

4. You Can Hear the Orchestra Rehearse for Free

The orchestra usually rehearses two or three times before a performance, and those rehearsals are usually free to the public, usually between 10 a.m. and 12:30 p.m. There are several scheduled through July 2.

By the way, if you spot a conductor with wild hair, it’s not Gustavo Dudamel. The San Diego Symphony’s music director is Rafael Payare, born in Venezuela 11 months before the L.A. Phil’s Dudamel was. Like Dudamel, he is a graduate of El Sistema, that country’s much-vaunted program for cultivating talented musicians.

If there’s no performance on the day you show up, there’s consolation. About two-thirds of Jacobs Park is open to the public every day. On nights when the venue is dark, it’s a picnic and sunset-viewing spot. The shell’s backside was built with steps and a patio that face the bay.

5. The Sound Gets High Marks

The San Diego Union-Tribune quoted cello superstar Yo-Yo Ma praising the Shell’s “incredible sound” during a performance last August. Also that month, Union-Tribune music critic George Varga wrote that “thanks to the venue’s six illuminated sound towers, the music’s luxuriant sonic richness was as full, crisp and well-balanced on the turf lawn at the rear of the venue as it was near the stage and various points in between.”

6. Striking as It Is, the Shell Is Not the First or Only Music Venue on San Diego Bay

The symphony played summer concert series in a temporary facility at Embarcadero Marina Park South from 2004 to 2019. On nearby Shelter Island, Humphrey’s Concerts by the Bay (next to Humphreys Half Moon Inn) has been staging summer concert series in its 1,400-seat outdoor theater since the early 1980s — just about every genre except classical music.

7. The Neighborhood Is Full of Weekend Possibilities

A few blocks farther north on the waterfront, you’ll find the Portside Pier complex (Brigantine, Miguel’s and Ketch restaurants), Waterfront Park (which has a playground, fountains and artworks) and the Maritime Museum of San Diego, which includes four sailing ships, two steam-powered ships, two boats that do tours of San Diego Bay and a submarine. No submarine races, though.

If You Go
Rady Shell at Jacobs Park

Parking: The closest lot to the venue (Fifth Avenue Landing Lot A) costs as much as $35 per car. There is a designated ride-share drop-off spot at 222 Marine Park Way. The venue is a short walk from the San Diego Metropolitan Transit System‘s Green Line’s Convention Center trolley stop. You also can arrive by sea from Coronado, taking the 15-minute, $7 ferry ride from the Coronado Ferry Landing to the Convention Center landing next to The Shell.

A few blocks farther north on the waterfront, you’ll find the Portside Pier complex (Brigantine, Miguel’s and Ketch restaurants), Waterfront Park (which includes a playground, fountains and artworks) and the Maritime Museum of San Diego, which includes four sailing ships, two steam-powered ships, two boats that do tours of San Diego Bay and a submarine. No submarine races, though.