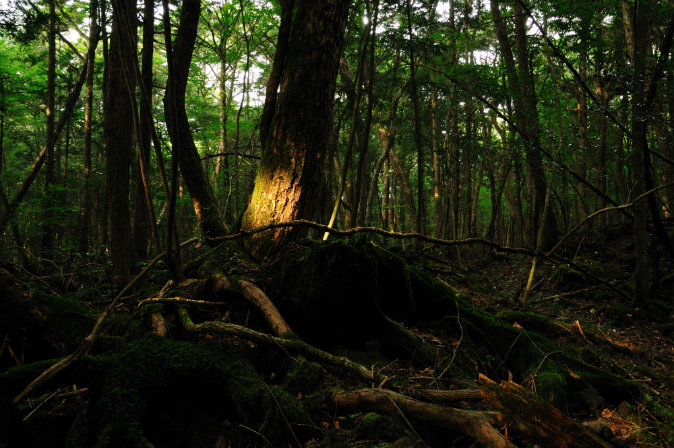 These are some of the most haunted places in the world. Though some appear quite welcoming, many harrowing tales say otherwise.

The forest floor is strewn with mementoes left by mourning friends and relatives where weary souls departed the Earth. But some would say they haven’t all departed.

In a special for the Japan Times, Rob Gilhooly writes of his shocking experience in the forest:

“I am walking through Aokigahara Jukai forest, the light rapidly fading on a mid-winter afternoon, when I am stopped dead in my tracks by a blood-curdling scream. The natural reaction would be to run, but the forest floor is a maze of roots and slippery rocks and, truth be told, I am lost in this vast woodland whose name, in part, translates as ‘Sea of Trees.’

“Inexplicably, I find myself moving toward the sound, searching for signs of life. Instead, I find death.

“The source of that scream remains a mystery as, across a clearing, I see what looks like a pile of clothes. But as I approach, it becomes apparent it’s more than just clothes I’ve spotted.

“In a small hollow, just below a tree, and curled up like a baby on a thick bed of dead leaves, lies a man, his thinning gray hair matted across his balding cranium. His pasty upper torso is shirtless, while his legs are covered only by black long johns—with blue-striped boxers sticking out above the waistband—and a pair of woolly socks.

“Under his bent legs a pair of slacks, a white shirt and a jacket have been spread out as a cushion at his final resting place. Scattered around are innumerable documents, a briefcase and other remnants of a former life. Nearer to him are items more closely related to his demise: empty packets of prescription pills, beer cans, and bottles of liquor.

“Seemingly this man, who looks to be in his mid-50s, had drawn his last breath before I heard that unsourced, chilling cry. …”

Thousands of Chinese soldiers were tortured and killed here. You wouldn’t know it to look at the peaceful shore, but the sand was once gouged into trenches for dumping the dead.

It is said that the shouts and cries of pain can still be heard at night.

A boardwalk at Changi Beach (Shutterstock)

In 1923, Death Valley Junction, Calif., was built, a mining town of about 350 residents. Only three people now live in this forlorn area in the middle of the desert. The mining work was dangerous and grueling, and the site witnessed many accidents, suicides, and even murders.

Part of the hotel is derelict, known as “Spooky Hollow.” A dark presence is said to dwell there, attacking people and showing particular hostility toward men.

It was featured on Travel Channel’s Ghost Adventures. One of the show’s hosts pointed out that the extreme heat would quickly spread the smell of decay when people died. A stench filled the hotel during one woman’s stay.

On Quora.com, a woman tells of her terrifying experience staying in the hotel all by herself.

“The room smelled terrible, and I don’t mean old and musty. It smelled like something had died in the immediate vicinity. Probably some poor desert rodent or creature. When I turned on the water, the shower also stank. [A] horrible smell came up from the drain as well. …

“But that turned out to be the least of my problems. There was literally no one at the hotel. Not a soul. I went to the front desk to find it gated up with a sign saying the front desk closed at 5 p.m. (they left early). I walked around the hotel looking for someone, anyone. … I was the only person there.

“I knew that the sun was now moving quickly downward into the western horizon and it felt lonely, and very very scary. [I] Couldn’t even call a friend for morale support because, guess what? No cell phone reception! … Words can never describe the fear inside of me. It sunk deep into the marrow of my bones. I never felt so alone and so watched at the same time. Heard shuffling sounds. Felt something around me. Felt the need to constantly look over my shoulder and behind me.

“I have had paranormal experiences before this one, and to be honest, some of them far more intense in terms of visuals and physical contact. But for some reason, which I still cannot explain, this paranormal experience was incredibly creepy and negative. [I] caught a glimpse of something out of the corner of my eye in the hallway leading to the rooms. Was it just my fear getting the best of me or something else? Okay. I’m done here. … I loaded my stuff back in the car, jumped in, and drove out of Death Valley Junction without a look back at it.”

In 1796, General David Bradford built this plantation in St. Francisville, Louisiana, near Baton Rouge. Troy Taylor and David Wishart’s investigation, detailed in their article “The Legends, Lores, and Lies of the Myrtles Plantation,” found only one confirmed murder on the site, though several are rumored to have happened there.

It is also rumored to be built on a native American burial ground.

Taylor and Wishart write: “The only verifiable murder to occur at the Myrtles was that of William Drew Winter and it differs wildly from the legends that have been told. As described previously, Winter was lured out of the house by a rider, who shot him to death on the side porch. It is here where the stories take a turn for the worse.

“In the legend, Winter was shot and then mortally wounded, staggered back into the house, passed through the gentlemen’s parlor and the ladies parlor and onto the staircase that rises from the central hallway. He then managed to climb just high enough to die in his beloved’s arms on exactly the 17th step. It has since been claimed that ghostly footsteps have been heard coming into the house, walking to the stairs and then climbing to the 17th step where they, of course, come to an end.”

Taylor and Wishart said: “There is no denying that the sheer number of accounts that have been reported and collected here would cause the house to qualify as one of the most haunted sites in the country.”

Moundsville Penitentiary was in operation for more than a century before it closed in 1995. Many men were executed or murdered by other prisoners in this imposing structure.

Cox felt someone caressing her hand, then a pressure in the middle of her back. Then, when the group went into the basement where an old prisoner was murdered for being “a rat,” a man on the tour with her was scratched. His skin was seemingly torn by something invisible.

She walked through another section of the prison and “got a horrible feeling that I wasn’t welcome there and someone was trying to choke me. From that point on, anytime time I went through that room I got really cold and chills, and I just didn’t want to go into that room. After leaving there at 6:00 a.m. I can honestly say the being there, and experiencing what I did, I do now believe in ghosts.”