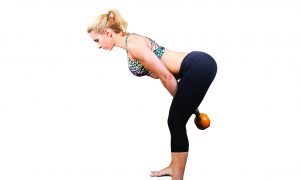 Kathy Smith’s Kettlebell Solution, which includes four 20-minute workouts, including Upper Body, Core, Buns and Thighs, and Fat Burning, plus two kettlebells made from a soft, lightweight material as opposed to the typical heavier, rigid cast iron (a lighter, softer weight means less chance of an injury for you, so you can exercise without worry). This is a simple way to try out an effective kettlebell workout in the comfort of your own home. Greatist also posted 22 excellent kettlebell exercises to try, five of which I’ve listed below:

Stand up straight, with feet a bit wider than hip-distance apart. Grab hold of the kettlebell with both hands, keeping your palms face down and arms in front of your body. Maintain a slight bend to the knee and drive the hips back, lowering the body — but not too low, this isn’t a squat! Then, in a fluid motion, explosively drive the hips forward while swinging the kettlebell, keeping the glutes and core engaged.

Remember: The motion should come from your hips (not your arms!) as your body returns to standing. Lower the weight back down between your legs while lowering again, and keep this swinging motion going for 12-15 reps.  Fitness trainer Jill Rodriguez demonstrates this technique and more in the video below.

This movement is the same as the two-handed swing, except using only one hand at a time! Swing the kettlebell up with one arm, but still swing the other arm to help drive momentum. Alternate hands when the kettlebell is behind your legs; aim for 10-12 reps with each arm.

Grab two kettlebells for this one. Place them in front of your feet and bend your knees slightly. Next, bend over to grab both kettlebells and pull them toward your stomach, keeping your elbows close to your body and your back straight. Lower the weights, repeat for 12-15 reps max.

Turn those toes out 45 degrees with feet a bit wider than shoulder-width apart. Place the kettlebell on the ground between both legs and begin to squat while keeping your core engaged, and grip the kettlebell handle with one hand. Then, using force from your hips, push through your heels to rise to standing, pulling the kettlebell upwards while your elbow drives up. Lower back down and switch arms. Shoot for 10-12 for each arm.

Fire Up Your Fitness With Kettlebell Swings

Kettlebells are one of the hottest new fitness trends, but there’s actually nothing new about them. The weighted balls with handles were originally used in Russia during the 1700s, reportedly as a weight to measure grains and other goods.

During festivals, vendors started to swing the kettlebells to show their strength, and from there perhaps the first kettlebell workouts were born.

Today, everyone from professional athletes to Hollywood celebrities and fitness buffs are embracing this “workout of all workouts,” most likely because they’ve discovered it’s a phenomenal way to build muscle, stamina and cardio fitness all wrapped up into one intense workout.

The end result is a dynamic, whole-body exercise routine that incorporates cardiovascular, resistance and range-of-motion training into one workout. As Men’s Fitness reported:

” …kettlebells are versatile. They’re ideal for explosive exercises that work major muscles, burn body fat, and build power, but they also add a new dimension to classic moves like chest presses and flys. And you don’t need a wall-length rack of them to get a great workout.

One pair will suffice for this routine. Use them regularly and you’ll see the body you’ve always wanted.”

One of the Highest Calorie-Burning Workouts There Is

In one study sponsored by the American Council on Exercise (ACE), participants were able to burn calories ‘off the charts’ when they used kettlebells in a high-intensity interval training (HIIT) format, which allows you to get an intense workout in a short amount of time.

They used 10 volunteers, ranging in age from 29 to 46, who were experienced with kettlebells, and asked them to do a workout consisting of swinging a kettlebell one-handed between their legs and over their head in what’s known as a “snatch” motion. The 20-minute interval workout entailed:

“Following a basic warm-up, subjects did 15 seconds of one-armed snatches, first with their dominant hand, then after a 15-second rest period, they performed another 15 seconds of snatches with the other hand.

The workout continued like that, with intervals of 15 seconds of work and 15 seconds of rest, for 20 minutes, followed by a five-minute cool-down.”

“So they were burning at least 20.2 calories per minute, which is off the charts. That’s equivalent to running a 6-minute mile pace. The only other thing I could find that burns that many calories is cross-country skiing up hill at a fast pace,” said the study’s lead researcher, John Porcari, Ph.D.

Do You Have 20 Minutes to Improve Your Back Health and Muscle Strength, and Reduce Pain?

Among the benefits you can expect to experience after several weeks of regular workouts include:

These benefits are possible because a kettlebell workout will not only help improve your aerobic capacity, it will also provide an anaerobic workout, which is important for your cardiovascular system as well as for building strength, speed and muscle mass. When doing high-intensity anaerobic exercises, you can literally be done in about 20 minutes, compared to spending an hour running on the treadmill during a typical aerobic workout.

Best of all, you can do kettlebell workouts virtually anywhere, once you learn a few basic moves. If you’re just starting out, proper form and technique are essential to avoiding injury. It’s a good idea to spend an hour or so with a personal trainer to learn the correct movements, or do so by enrolling in a beginner group class. While you’re still learning the ropes, women will generally want to start with a kettlebell weighing no more than 8-15 pounds, while men can typically start with a 15- to 25-pound version.