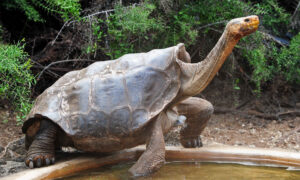 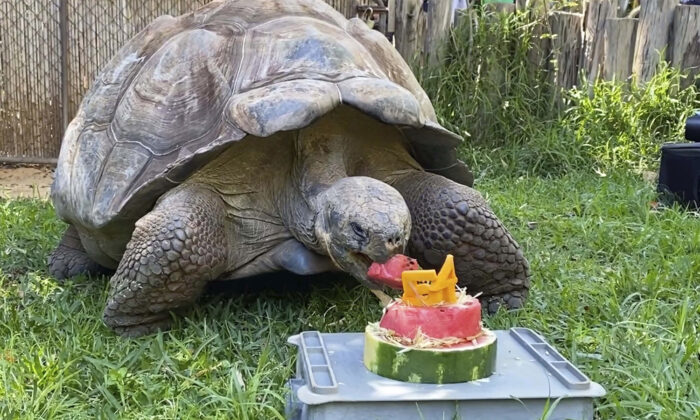 An adorable tortoise has proudly celebrated his 54th birthday by enjoying a special watermelon cake to mark the occasion.

Galapagos tortoise Cerro was originally born at San Diego Zoo in the United States in 1966 but was moved to Perth Zoo, Western Australia, in 2005 as part of a global breeding and recovery program.

Tipping the scales at 441 pounds (approx. 200 kg), it is no secret that Cerro loves his food—so zookeepers treated the birthday boy to a delicious cake made out of watermelon for the occasion.

Despite being over halfway to 100, Cerro is still considered a youngster—with the oldest Galapagos tortoise on record living to 175 years old.

Galapagos tortoises are the largest tortoise in the world, and with less than 20,000 individuals remaining in the wild, they are vulnerable to extinction.

“For Cerro’s birthday, we’ve made a cake filled with his favorite treat which is watermelon,” zookeeper Leanne Kelman said. “These tortoises don’t have a good sense of smell, so they use their eyes to find food.

“Anything red really gets Cerro’s attention, he loves any brightly colored foods.

“He is the less dominant tortoise out of the two we care for, except when there is food around, then he gets a bit of speed up to make sure he eats first.

“In the wild these tortoises are vulnerable to extinction, with the main threats being introduced species such as rats, dogs, and cats, which eat tortoise eggs and young tortoises.”