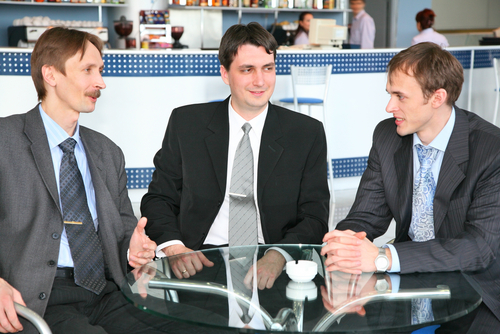 The Epoch Times has compiled four stories detailing strange coincidences from a thread on Reddit with dozens of stories shared by users.

The people who shared these stories on Reddit found themselves in puzzling, but funny, situations.

A friend and I had lunch with a total stranger who got in my friend’s car when he was picking me up and we each assumed the guy was the other’s friend whom he’d invited but not said anything about (and neither of us directly asked, ‘So how do you guys know each other?’).

The guy was nice enough and we ended up having a fine lunch with pleasant, but generally chitchat-level, conservation.

My friend called me up after he dropped us off and asked, ‘Who in the world was that guy?’ We then discovered our assumptions about the other knowing him were false.

We had to know why this happened, so I looked up the guy in the employee directory (worked at the same company) and emailed him.

He replied explaining he was to meet a Brian (my friend is also a Brian) who had the same color and model car at the same spot we picked at the same time.

He thought that he’d met up with the right people until about [three quarters] of the way through lunch when Brian said where he worked and that didn’t match with the Brian he was to meet.

2. The Only Difference is a Cake

I went to a friend’s birthday party a couple months back. She had requested that I bring a baseball bat for a piñata that was going to be broken open during the party. I also brought a cake from a local bakery near my apartment.

Fast forward to the end of the party. I’m leaving and it’s 1:30 a.m. in the sketchy side of town. I walked to the door, grabbed my leather jacket from the coat rack and put it on over the hoodie I was wearing. I grabbed my bat, the half eaten cake and left for a tired drive home.

This is where things get weird.

I walk out her front door with this big … baseball bat slung over my shoulder, cake in hand. I turn left to walk to my car, which is parked down the street, when I notice someone is walking parallel to me on the other side of the road.

[He was] going in the same direction, at the same exact pace.

This guy is identical to myself. He is wearing a leather jacket over a hoodie, with a big … baseball bat slung over his shoulder. The only difference between us is that he is wearing a masquerade mask.

We both look up and catch each others eyes. Immediately, the two of us look away to concurrently stare at the ground in disbelief.
I am coming from a birthday party, and he looks to have just committed some sort of felonious crime.

He looks up, I look away. I look up, he looks away. Finally, we catch eyes for the second time. We stare. We each hold our respective gazes for a distance of 20 feet, but it felt like a mile. Now I can’t take it anymore. I have to say something. … I blurt out the only thing I can think of: ‘Well, this is definitely the craziest coincidence that’s happened in my life.’

He says nothing, but after a tense second, nods in agreement. He splits down a side street and I get to my car, still in disbelief.

I toss my bat and cake into the trunk of my car, and not a second after I close the lid, three cop cars come tearing around the corner. Two go screaming past me and the third one rolls down his window.

Before he can say anything I blurt out: ‘Are you looking for a man in a leather jacket wearing a masquerade mask and carrying a baseball bat?’
The cop says ‘yes,’ to which I reply, ‘He went that way!’ and point down the side street.

Finally, arriving home after the long night, I had a realization: What if I had left my friend’s apartment 30 seconds later than I did? I would have been the guy, in the leather jacket, with the baseball bat walking down the street at 1:30 a.m. in the morning.”

“The other man was on the run because he broke into a bakery.”

[It was 2008], I was at a coworkers house for a 4th of July party. He lived on the top story of these condos. Everyone is on the balcony drinking and having a good time. I look down and watch as this strange man comes through the gate and up the stairs to where everyone is partying.

When he makes it to the top—he looks to be about mid 50s—and stops everyone to announce, ‘I am Muhammad Ali, I come-ah from space mon.’

He then sits down, pulls out a bottle of wine from his jacket, and starts drinking.

He tells us he came from Africa through space. Obviously no one believes him, he pulls out a passport from Nigeria. [He] stays for most of the night …
And then things get weird.

[About three] years later, and quite a ways away from the original party, I am in the car with my roommates and this story comes to mind. So, I am starting to tell them about the strange man who crashed this party.

We get back to the house, and as I am walking up the stairs of the porch I get to the, ‘I am Muhammad Ali, I come-ah from space mon’ part.
I hear from the opposite side of the street, ‘No, I am Muhammad Ali mon!’

And the same … guy walks across the street and sits down on our porch. [He] pulls out a (presumably) different bottle of wine and starts drinking.
All of us were too stunned to react appropriately.

My [husband] and I decided to purchase a home close to where his daughter (from first marriage) lived, since we were visiting her every weekend.

The cornfield around our property was eventually developed into housing and they put in a street for that community. We now live on the corner of Seymour and Samantha.

His daughter’s name is Samantha and, yes, we did get to see more of her.

RELATED: 13 Crazy Coincidences That Could Make You Believe in Fate

*Image of a lunch meeting via Shutterstock.