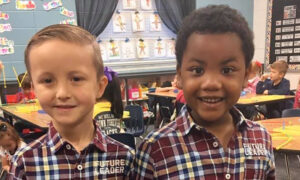 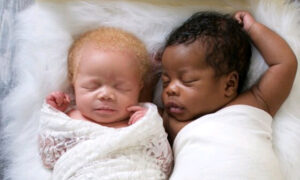 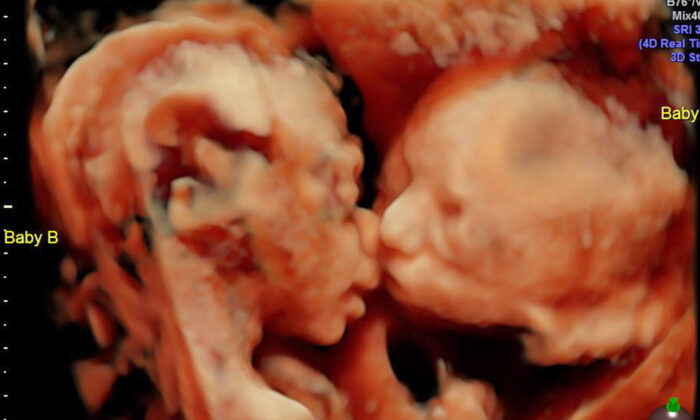 An expectant mother’s 24-week sonogram revealed her twin baby girls showing their affection for each other in the womb, and the mom-to-be and her partner decided that the image was simply too cute not to share.

First-time mom Carissa Gill and her partner, Randy Good, of Croydon, Pennsylvania, had their 4-D week-24 ultrasound at Fetal Vision Imaging in nearby Levittown. The couple later described witnessing their unborn babies sharing a sweet sisterly lip-lock as “beautiful to see.”

“Bella was kissing Callie on the cheek, and then they actually started kissing,” Carissa told Today, adding that she planned to keep the image to show her daughters when they grow up.

“If it just so happens that they’re fighting one day,” she added, “I can tell them, ‘Remember when you were kissing in the womb!’”

Fetal Vision Imaging’s sonogram technician, John Hamburg, told The Huffington Post that in facilitating over 15,000 sonograms, he had never seen twins face to face, appearing to kiss. “Usually, one’s head is up and the other is down,” he said.

Carissa and Randy posted their sonogram online, telling Fox News that they wanted to share their story with the world. “Pregnancy is a beautiful thing to capture, especially when you get to see moments like this,” said Carissa.

On the occasion of the girls’ first birthday, Carissa paid tribute to their blossoming personalities in a heartfelt Facebook post. “You both are so different yet are so similar,” she wrote. “Bella you are my wild child, my attention baby, the one who has to do it ‘first’ every time … You’re sassy, smart, funny, and too damn cute.”

“My Callie bear, my Callie bean! You are cuddly, mellow, calm, cute, loving, yet you surprise me every day,” Carissa continued, “you are now coming out of your shell and it is so amazing to see!”

Just weeks before Carissa and Randy’s “kissing twins” sonogram went viral in 2017, another couple made headlines for a funny week-22 sonogram taken in Utah. Mackelle and Jared Ahlin’s unborn baby appeared to be making the “rock on” gesture with one of their tiny hands.

“My husband was so excited,” Mackelle told The Kansas City Star. “His excitement just made me start giggling. The ultrasound lady probably wanted to kill me because I could not stop laughing.”

“We’re not much of a rocker family,” she added.

Reflecting on life with “kissing twins” Bella and Callie in a May 19, 2020, post on Facebook, Carissa confirmed that her toddlers are indeed growing up to be the best of friends. The doting mom described her girls as “obsessed” with playing princess dress-up together.

“This age is so hard,” the twins’ mom admitted, “but it is so rewarding, I love seeing them do things that they love.”