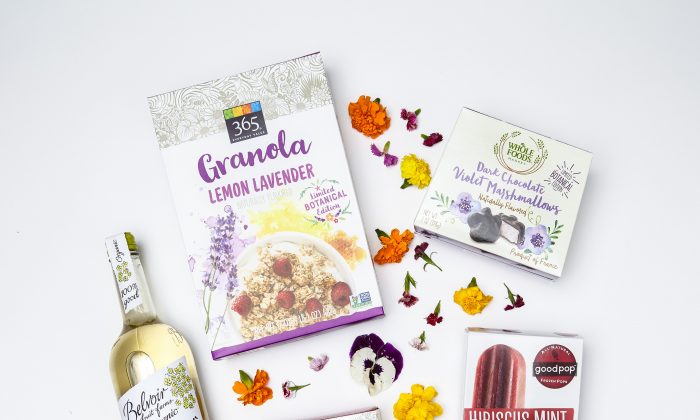 Flowers like lavender, hibiscus, violet, and elderflower are lending their flavors and fragrances to drinks and sweets. (Courtesy of Whole Foods)

2018 Food Trends: What to Expect on Your Plate in the New Year

Health and wellness, as well as sourcing and transparency, are only getting more important to consumers.

“You have a more educated consumer base interested in what they are putting in their bodies,” said Denise Purcell, head of content at the Specialty Food Association (SFA), where a panel of trendspotters identified key food trends for 2018.

Super powders, functional mushrooms, and collagen-infused foods are all part of the trend, while plants in all their forms—root, flower, and everything in between—are finding new incarnations on the plate.

Here’s a look at food trends predicted for 2018.

Eating for Wellness and Beauty

“We have baby boomers, Gen-Xers—even millennials are getting older, and they’re starting to take their health a little more seriously,” said Purcell.

The Whole Foods 2018 trend report lists super powders—from matcha to maca root, which are easy to incorporate into drinks, soups, or baked goods—as up-and-coming. Protein powders, such as Vital Proteins Collagen Peptides, are evolving to include skin- and hair-enhancing collagen.

Moringa powder continues to be big, while beneficial, functional mushrooms like reishi or chaga, which have been traditionally used to support health in the form of dietary supplements, are finding their way into drinks, smoothies, coffees, and teas.

On restaurant menus, sprout by sprout, root by root, plants are gradually upstaging meat and moving to the center of the plate.

Mark Erickson, master chef and provost at The Culinary Institute of America in Hyde Park, N.Y., notes there’s a “movement toward healthier menus without promoting it so much as being healthy.”

As to an “it” vegetable, cauliflower still holds strong, says Alison Tozzi Liu of the James Beard Foundation, who is also part of the trendspotting panel. And butternut squash had better watch out; more and more chefs are featuring the sweeter honey nut squash instead.

Diversity is key, as well as unusual parts of the vegetables; Liu notes the use of broccoli leaves, for example.

Algae continues to be popular, especially in snacks such as seaweed fava chips.

Finally, floral flavors are also carving themselves a spot. In mapping trends, Whole Foods noticed the popularity of edible flowers in Europe and is offering its own products, such as dark chocolate violet marshmallows or Lavender Lemonade Tea Bags With Hibiscus.

In the realm of baked goods, the gluten-free trend continues, but traditional bakeries are also reviving practices such as using local grains, milling the day before baking, and allowing for longer proofing times, says Ken Blanchette, director of sourcing for online grocer FreshDirect and an SFA panel trendspotter.

“Bread has become all or nothing, either high-end and artisan or low-carb and high-protein,” said Jonathan Deutsch, professor of culinary arts and food sciences at Drexel University and another SFA panel trendspotter.

Transparency is a big factor for consumers, who want to know where their products come from.

FreshDirect’s Blanchette said, “Local will trump organic. Can you trace it to X person, place, process?” He cautions that in the case of animals, organic does not mean the animals will be treated any differently than in conventional settings.

FreshDirect’s lamb is all pasture-raised. “When I first tasted it, I didn’t believe it. It was just too sweet—no tang,” he said. It turned out these were younger animals, fed only on natural grasses and no silage, which makes a difference in the quality of the fats.

For chicken, he uses chickens from Miller Poultry, a brand that works with small Mennonite farms in Indiana. These farms happen to be in the middle of Monsanto country, where genetically modified crops can contaminate non-genetically modified ones through cross-pollination. He was there when a truck with grain was turned away when an on-the-spot analysis showed the grain was over 5 percent GMO.

According to the Mintel Global New Products Database , natural product claims (including additive-  and preservative-free, organic, and GMO-free) appeared on 29 percent of global food and drink launches from September 2016 to August 2017. That’s an increase of 12 percent from 10 years before.

Cutting Down on Waste

Deutsch points out that 30 to 40 percent of the food production goes to waste. “We have perfectly good sources of nutrition that are going to the trash can,” he said.

For example, in plant-based milk production—almond or soy milk, for example—the pulp is typically high-end protein fiber that gets thrown away.

“I think there’s also an ethical and moral dimension,” said Deutsch. “Food is a special resource, a God-given resource. A lot of labor, effort has gone into it. To kill an animal and not use all of it for food, or to take something out of the earth and use only a piece of it because you’re not knowledgeable enough, or not committed, is a real problem.”

That idea resonates with customers. “People will pay more without having tasted it, and be positively disposed toward upcycled food, which is great,” noted Deutsch. But, he adds, the bottom line is, the product has to taste good to earn return customers.

Liu sees a “continuation of cutting down on waste, but in different ways.”

Cue whey, a byproduct of making yogurt that is now being used as a pickling liquid or as a cooking liquid for grains.

If cuisines of nations were stocks, I’d be putting all my bets on South Korea right now.
— Mark Erickson, master chef and provost, The Culinary Institute of America

“If cuisines of nations were stocks, I’d be putting all my bets on South Korea right now,” said Erickson of the Culinary Institute of America, where South Korean students are the most represented international presence.

While Korean flavors continue to be popular, the SFA notes the rise of Filipino food, with products such as Coconut Suka, a spicy coconut vinegar, or Mansi Premium Calamansi Juice Drink from the Philippines.

It’s been a good year for Middle Eastern cuisine, and Whole Foods notes the popularity of different influences such as Persian, Israeli, Moroccan, Syrian, and Lebanese. Trending ingredients include harissa, za’atar, and dried fruits. The company has also jumped on the bandwagon by offering 365 Everyday Value® Organic Tahini.

And, if there’s one dish that’s now branching out on its own, it’s the taco. Laydennotes the popularity of paleo, alternative-flour tortillas, made with almond and cassava flours, for example.

Stimulation for All the Senses

Market research firm Mintel predicts color will continue to be big, but advises to keep an eye on the sound, feel, and texture of food, whether that’s the spicy tingle of peppers or chewy beverages.

Whole Foods predicts a growing popularity of sparkling drinks and has come out with its own Italian sparkling mineral waters.