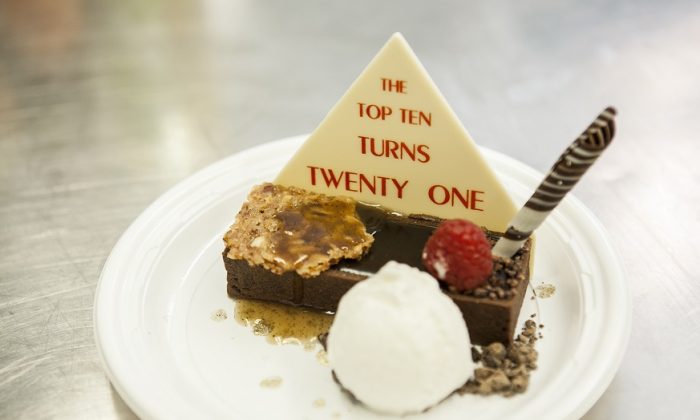 The evening was a fantasy come true for the sweet-toothed, the very kind of people who can never say no to desserts when the end of the meal rolls around, no matter how much they moan and groan about being stuffed.

I am one of those—and the crowning of the 2014 Top 10 Pastry Chefs in America by Dessert Professional magazine was a sight to behold.

The winners brandished their mixing bowl trophies and then set to feeding a crowd of 350 people at the Institute of Culinary Education.

There were miniarchitectural visions, like the confection produced by Georges Berger from Chocolate Fashion in Miami. A recipe for his pistachio brittle and white peach mousse with grotto mascarpone, complete with graphics of the construction process, had all the precision of a blueprint.

There was also a very unassuming grapefruit tart prepared by Joshua Johnson of Vanille Patisserie in Chicago. It looked humble and rather plain compared to the others. But it was stop-in-your-tracks amazing, in its own glorious simplicity: a rosemary-infused brown butter cake topped with grapefruit and pine nuts.

He works with three flavors, at the maximum four, and two or three textures.

“You need to have one star in a dessert,” he added. “If you have one star you build off of it, but it has to remain the star. You can’t do grapefruit and then I don’t know, let’s do strawberries, let’s do some vinegar.”

He reflected: “That’s what you do when you love food. Everything has a memory. Everything brings something to it. It’s like a good restaurant, you know how happy the people in the kitchen are based on the food. … In a happy kitchen a good team inspires each other, they make good food together.”

Derek Poirier, a pastry chef at Valrhona’s Ecole du Grand Chocolat, made another very well-received dessert, light as air, not too sweet, a marvelous combination of praliné (a blend of sugar and nuts) and coffee, with Valrhona’s Opalys and Bahibe chocolates.

“It’s about textures. It’s about tasting the pure flavor, and sugar usually interferes with this,” Poirier said. “I love praliné, I love caramel, I love nuts. Praliné pairs really well with coffee, with a lot of things, coffee-praliné, lemon-praliné.”

“I was always taught pure things, basic things—respecting the flavors. Sometimes desserts get too complicated. I love the classics,” he said.