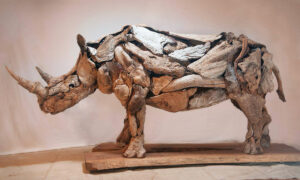 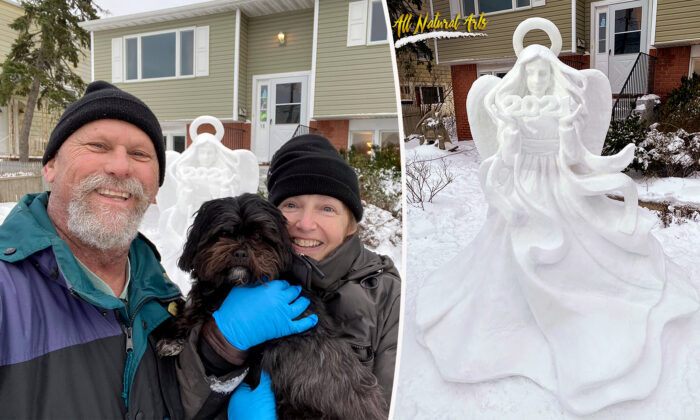 In recognition of the last year being a “difficult year for so many,” two sculptors from the East Coast decided to create a symbol of hope and joy. Together, they crafted a life-size snow angel in a front yard, and the beautiful emblem has touched hearts.

Andy Gertler, 62, is a sculptor and musician from New York, whilst Sue Beatrice, 59, is a sculptor who hails from New Jersey. Both the business partners have had experience working with snow before.

“We created [the angel] over the course of two days, including the design and preparation of the snow,” the two told The Epoch Times via email. “We had hoped to bring smiles to people’s faces locally but did not expect it to touch as many hearts as it did.

Constructing the snow angel, which was built in front of a home in the depths of winter in December 2020, was a several-step process. In a detailed post, Andy explained the process, writing that it started with a “pound up,” stacking and compressing snow using three 2-foot pool forms of different diameters held in place with C-clamps.

They placed the largest form on the ground, filled it with snow, and compacted the snow by treading on it. Once filled, they added the second form on top, and again with the third until the desired height was achieved.

Next, they sketched out the angel and drew her directly onto the compacted snow with a blue highlighter pen. “You didn’t know you could draw on snow, did ya?” Andy joked.

Using saws to cut out the crude shape, Andy and Sue switched to smaller tools, including surforms, to refine. Shaping and smoothing until the angel’s figure sprang forth, they added a little extra snow for the tips of her wings and the bottom of her dress.

Finally, the halo for the angel was added.

Andy filled a 5-gallon bucket with sand and carved a channel around the circumference to make a mold. Lining it with plastic wrap, he filled the channel with slush and let it freeze overnight. Popping out the “ice halo” the next day, he then shaped it to symmetrical perfection with a surform.

The halo was affixed to the angel’s crown using more slush, which hardened within minutes in the freezing outdoors.

A photo of the finished angel on Andy’s Facebook page amassed tens of thousands of shares. One person, lucky enough to see the sculpture up-close, commented, “This is awesome! Thanks for sharing! I have to say seeing this in person is the ultimate. It truly is a spectacular labor of love!”

To encourage others to hold the emblem close to their hearts, Sue, who runs All Natural Arts, designed a replica sterling silver pendant in which the angel holds the word “Hope” in her hands. The pendant is also for sale on the website.

“I’m thinking perhaps a white brass with a sparkly sandblasted finish to give it a snow-like appearance,” Sue posted on All Natural Arts’s Facebook page. “Wearing it will serve as a reminder that there is always hope.”

Andy and Sue have their own shops, they told The Epoch Times, but they travel the world together for art projects whenever possible.

Regaling past projects, they recalled another meaningful sculpture using snow as the raw material. The artwork, which was created during a Valentine’s Day snowstorm, featured a jazz saxophonist and trumpet player leaning back as they play their sweet music, thus creating a heart shape between their bodies.