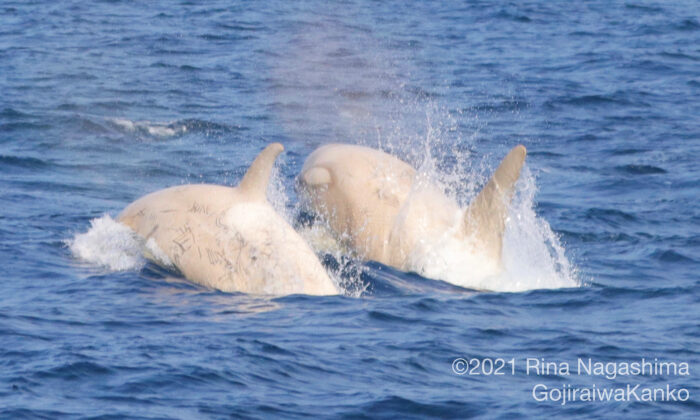 In what might be considered a very rare sighting, whale watchers off the coast of Japan spotted two white orcas swimming side by side, with one of them even being unknown to the crew, amid a pod of 10 orcas.

“I am a member of the crew [and a] guide, but actually I was working at the office on that day,” 31-year-old Mai, who lives in Rausu, told The Epoch Times.

Describing the moment further, Mai said that the team were “leaving the Rausu port and running offshore. When running about three miles, we discovered a pod of orcas.”

Two white orcas, one older and another younger, soon became visible; judged to be a male and a female from the size of their bodies and dorsal fins.

“Whale watchers were really surprised. They were excited,” said Mai; “Most of the guests have never seen a wild orca before they come here.”

The captain and crew were more excited than the guests, she admitted, because they know white orca sightings are a very rare occurrence. Gojiraiwa-Kanko crews have previously reported a white orca in 2019, but haven’t seen one since, and remain unsure whether this was the same whale.

“We are not sure that they [have] albinism or leucism,” Mai said of the white pair. “True albinos will have completely white skin and red eyes, but we [could not] observe clearly.”

Albinism is an inherited trait characterized by a lack of melanin production. Leucism, by contrast, is a genetic mutation that inhibits the deposit of melanin in the skin and hair, or fur, and can appear as patches on the body.

Just before midday on July 24, said Mai, additional orca pods came together to form one large pod. Gojiraiwa-Kanko shared photos and a video of the orcas on Instagram.

In close-up shots, it is possible to see dark, visible scarring of unknown origin on the torso of the younger white orca due to the lack of pigmentation in the skin. While eye-catching to wildlife lovers, albinism and leucism may put wild animals at a disadvantage by making them more visible to both prey and potential predators.

Mai was surprised and delighted that the tour company’s social media posts went global. “I would like so many people to watch this video and photos,” she told The Epoch Times, adding, “When the coronavirus situation settles down, please come to visit here and join us!”

According to marine biologist Stephanie Hayes, only around 10 white orca sightings have ever been recorded. Yet, more sightings mean more opportunities to study white orcas, their behavior, and how to protect them.

Speaking to Canada’s CBC News, Hayes said, “It would be really amazing to be able to answer basic questions about killer whales with leucism and just to be able to watch a wonderful pod grow.”

Captain Yuki Hasegawa of Shiretoko Nature Cruise boat told The Asahi Shimbun that whale watchers are seeing more orcas in 2021 than usual. Yet two white individuals swimming side by side, he claimed, “may be unprecedented in the world.”