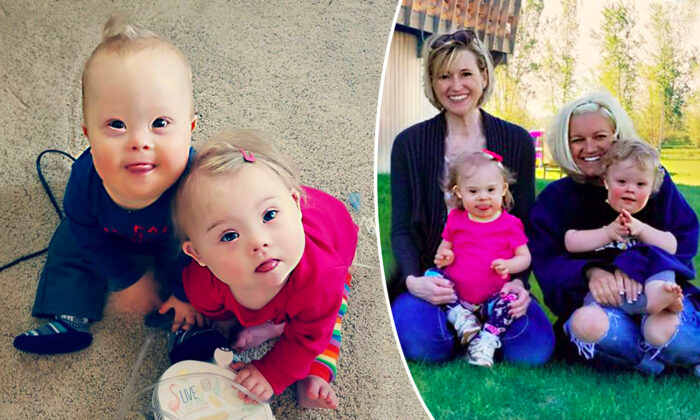 Childhood acquaintances Amy Sanders and Lana Beaton reunited around the time of having overlapping pregnancies to share a unique experience: both moms-to-be were expecting a baby with Down syndrome.

After giving birth to Clara and Cutler, Amy (Cutler’s mom) and Lana (Clara’s) quickly realized there was something else to be celebrated beside their renewed friendship as their babies grew; they were fast becoming firm friends, too.

It was an “instant connection,” both moms said.

Amy, a teacher, and Lana, a full-time mom, knew each other growing up in Grand Forks, North Dakota. According to the Daily Mail, they first became close when they welcomed Clara and Cutler within months of one another.

Mom-of-four Lana gave birth to Clara in November 2015. She contacted Amy after learning from a mutual friend that Amy’s son, born in February 2016, had been diagnosed with Down syndrome, too.

“I thought by connecting with Amy we might be a good support for one another,” Lana told KVRR. “I sent her a sensitive message asking her if Cutler had an extra chromosome, like Clara, and Amy wrote back within an hour.”

The moms met in a local Starbucks in April 2016. Both say their toddlers hit it off instantly. “We laid the babies out on a blanket and they started touching each other,” Lana recalled. “You could see that there was a connection there between them.”

Lana, who has three children beside Clara with her husband, Scott, admitted assuming that things would go the same way with her fourth child as with previous babies.

Cutler is Amy’s second child. But it turned out that despite their previous parenting experience, the two moms’ mutual support would soon become invaluable to them as they navigated the highs and lows of parenting a child with Down syndrome.

After witnessing the blossoming friendship between Clara and Cutler, the moms decided that their bond was simply too unique not to share with the world. They turned back to the social media platform that had brought them together and started a brand-new Facebook page on which to chronicle their thriving toddlers’ journeys.

Today, the pair’s adorable antics are melting hearts around the world.

“We get a lot of, ‘Your picture brightened our day,’” said Amy. “That’s pretty incredible. These kids were brought together for a reason; I think it’s to make everybody happy.”

After Clara and Cutler became virtually inseparable, their moms continued to honor their bond by ensuring that certain aspects of their schedules were conveniently intertwined; the two children have joint occupational, physical, and speech therapy sessions, and spend at least two days per week together on playdates.

Confident Clara has a “positive influence” on Cutler, both moms said, as the little boy is comparatively reserved. When together, the playful pair particularly enjoy a mischievous game of tag and watching movies.

Dear Alissa,We are not fooled by your fancy bubble machine with the tiny button to push. We know that this is us WORKING while we PLAY in bubble land. The jig is up.That being said, carry on. 💛💙💛💙Bubbling over for OT,Clara & Cutler

Clara underwent open heart surgery when she was just 3 months old. Consequently, she is fed through a G-tube in her stomach. The bubbly little girl also lives with Hirschsprung’s disease, a condition that affects the nerves in her colon.

To ease the pain of occasional separation owing to hospital visits, the pint-sized buddies “write” to one another (courtesy of their parents) via their Facebook page, Clara & Cutler. The adorable back-and-forth has won the page a huge and loyal fanbase; to date, the page has over 13,000 followers.

“Everybody is blown away by their friendship. Everybody is smitten with them,” said Amy. “They’re just such a great team. I think we all feel very blessed and lucky that they’re in our lives.”