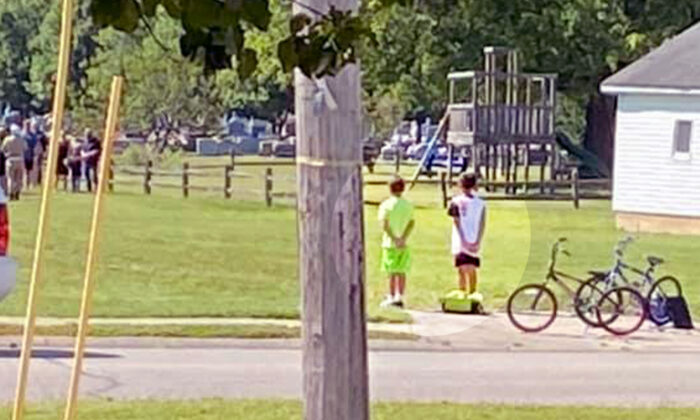 A couple of boys in Indiana made their neighbor proud when—while out riding their bikes—they heard a military funeral procession, stopped, and stood at attention while Taps played.

Batesville local Jacqi Hornbach was dog-sitting at her friend’s house, which is across the street from a cemetery, when the procession pulled in on Thursday, Sept. 2.

“The boys rode up on their bikes and immediately stopped when they saw the funeral,” she told The Epoch Times. “They got off their bikes, put down their backpacks, and waited quietly together for a minute or two.

“The respect these two young boys showed for the deceased military man was so heartwarming.”

Jacqi was so moved that she snapped a few pictures of them as they stood there. She later took to Facebook and shared the photos with the world—despite her initial hesitation.

She wrote in a caption: “I debated whether or not to post this, but with all the negative things going on, I thought this was needed.”

Jacqi told the newspaper she wanted to spread some positivity in a world where the “news can be so negative.”

“I had to snap a pic as I was so proud of these two young men,” she wrote. “Their parents should be so proud, and I’m sure the serviceman was in heaven smiling down on them.❤️”

One of the boys’ fathers, Sean Moody, said he raised his son Lane, 8, to have “honesty, respect, and to be polite and respectful.”

“When he heard the 21-gun salute and Taps he knew it was important,” Sean said. “When I got home from work, they told me what they had done and I was proud to hear they had done that!

“It wasn’t until I’d seen the pictures of the boys that had a whole different feeling with it!”

The soul-stirring pictures of the boys went viral on Facebook, garnering hundreds of reactions, shares, and patriotic comments.

Facebook user Julie Zacher wrote: “What a tribute to our fallen soldier but also to their parents!”

A U.S. Army vet from Arkansas, Clif Arnold, commented: “I’m as patriotic as they come, and I’m not sure if my boys would have done the same.”