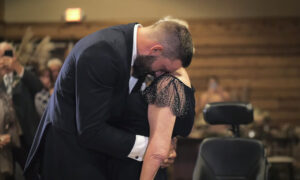 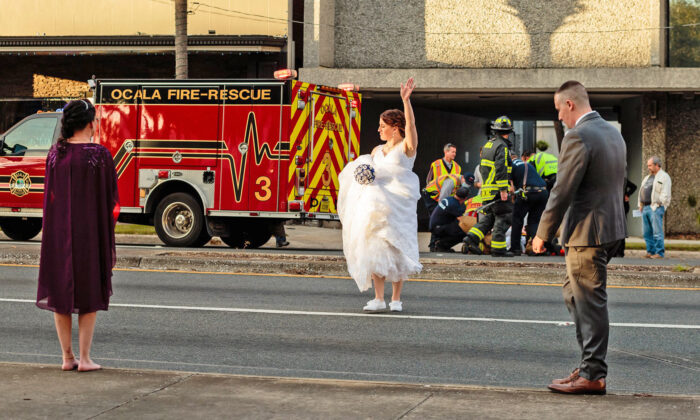 Two Florida police officers have been commended by their department for halting their wedding photo shoot to render aid to a victim of a road traffic accident.

Detention Deputy Taylor Rafferty and her now-husband, Deputy Chris Rafferty, were taking group photos with their wedding party on Dec. 12, 2020, when a man was hit by a car on the square in Downtown Ocala, Florida. The Raffertys, both law enforcement officers with the Marion County Sheriff’s Office (MCSO), didn’t hesitate to halt proceedings and step in, even though they were off the clock.

Both the bride and groom had expected a “typical wedding day,” MCSO posted on Facebook. “Unfortunately,” the department continued, “danger and tragedy don’t take breaks, so even on your days off a law enforcement officer’s duty is to protect and serve.”

The entire wedding party, many of whom were law enforcement officers and were dressed to the nines in wedding attire, stepped in to help. The team who rendered assistance comprised of members from MCSO and one officer from the Ocala Police Department. The group consisted of Deputies Dustin French, Samantha Horne, and Ryan Murphy, Detention Deputy Danielle Donely, and Officer Kyle Kern.

Horne stepped up to support the injured man’s head while the bride herself stood in the road, in her wedding dress and white sneakers, directing traffic.

Luckily, the victim was not severely injured as the Raffertys’ intervention helped things along. Medics then arrived to transport him to a hospital, and the wedding photo shoot continued.

Later, the MCSO voiced high praise for the selfless newlyweds, stating their “greatest admiration” for both the Raffertys and every member of their wedding party, who helped without hesitation. “Thank you for dedicated service to our community in every way you know how!” they posted.

Netizens echoed the same sentiments, with thousands reacting to the social media post and hundreds of them leaving comments.

“That’s awesome and truly dedication to your calling,” wrote one netizen. “God puts his angels in the right spot at the right time.”

“A day to remember (and tell their grandkids about),” wrote another.

Whilst a third one chimed in: “It’s not a job, but a calling. A first responder is never truly off duty. Uniform or not, it’s in their blood. It’s what they do.”