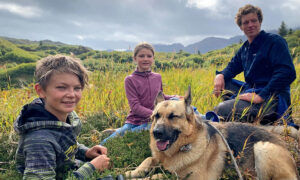 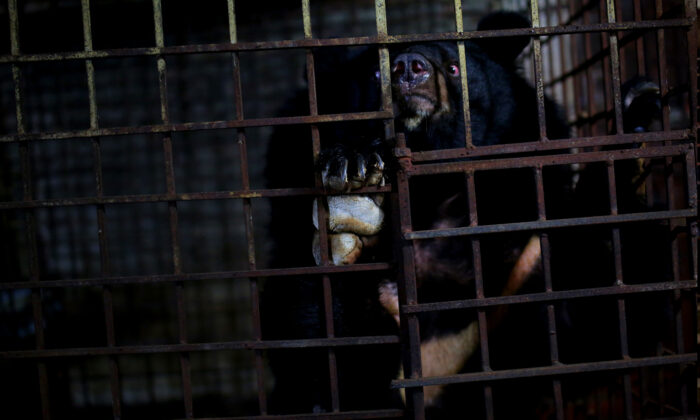 Two Asiatic black bears have been liberated from a lifetime of suffering after being locked in a dark basement beneath a clothing shop in Vietnam. For years, they had suffered agonizing bile extractions for the illegal bear bile trade.

A male bear named Xuan endured these appalling conditions for 17 years, reportedly after being captured as a cub in 2004. It’s unknown how long his female counterpart, Mo, has been held captive. Both were kept in small cages in a basement without ventilation, natural light, or sensory stimulation.

International animal welfare group Four Paws, based in Vienna, Austria, intervened in the early morning of March 23, calling the bears’ conditions “the worst we’ve ever seen.” A rescue team liberated the bears from the basement in Son La province in northwestern Vietnam and prepared them for the 10-hour journey to their Bear Sanctuary in Ninh Binh.

“It was the first time we have rescued bears from an environment without any natural light and only exposure to artificial light,” said Szilvia Kalogeropoulu, the Four Paws veterinarian who oversaw the bears’ rescue and transport, in a press release.

The only times Xuan and Mo ever saw light was when their owner fed them or came to puncture their gallbladders with a needle to extract bile, Four Paws explained in a blog post, adding, “This bile was used for medicinal purposes by the family of the owner.”

The group shared photos of the extraordinary rescue on their Facebook page.

In the sunless, windowless basement, they had to use flashlights to find the cages. Yet despite having been exploited for years in such horrific conditions, both Xuan and Mo seemed “quite calm and unafraid” to meet their rescuers.

“Maybe they knew that we want to change their life for the better,” the Four Paws team said.

Bear bile extraction and selling has been illegal in Vietnam since 1992 and demand has diminished. Still, Four Paws claims up to 372 bears continue to suffer in Vietnamese bear farms or under private ownership because of the lucrative black market trade.

Xuan and Mo were sedated, and after a preliminary medical examination, they were transported to the Bear Sanctuary in Ninh Binh. Run by Four Paws, the sanctuary is well suited to the bears’ species. It also serves as an education center for wildlife conservation in Vietnam.

“The health checks for both bears revealed gallbladder disease, due to multiple unsanitary and traumatic bile extraction processes carried out on the farm,” said Kalogeropoulu. “In addition, Xuan is overweight, has liver disease, and his teeth are in terrible condition.”

Both bears were scheduled for further exams at the sanctuary clinic in order to come up with the best treatment plans. “Bears are very resilient,” the veterinarian noted, “but it will be a long road to recovery nonetheless.”

While Xuan and Mo may finally recover from their horrific ordeal, it’s believed hundreds of bears remain in captivity. The Bear Sanctuary houses 40 Asiatic black bears, many whose states are a product of bile farming and the illegal wildlife trade.

Nevertheless, Four Paws, in collaboration with the Vietnamese government, is making headway, as 936 bears were recorded as being held captive in bear farms in 2017.

Xuan and Mo’s rescue is part of Four Paws’ #SaveTheSaddestBears campaign, a movement aiming to give the world’s most desperate captive bears a second chance at life.