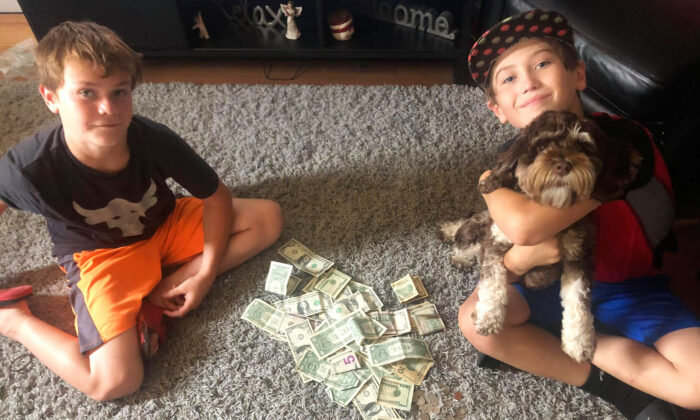 2 Boys in Kroger Checkout Count Their Money, Are Short $4—Until Man Behind Them Intervenes

Two boys were in a Kroger, buying ingredients for a lemonade stand with one of their mom’s cards—when the card unexpectedly failed in the checkout. Thanks to a kind stranger, though, they walked out with all the supplies they needed.

The two Michigan friends from Allen Park, Chris Kilburg-Leis, 11, and Dennis Hougas, 12, rode their bikes to the store in Lincoln Park. Chris’s mom, Michelle, 45, an admin assistant, was working from home at the time.

“I got a phone call from Chris asking me what my Kroger card number is,” Michelle told The Epoch Times. “I was shocked as to why he wanted that number, because the card is only for coupons I can download on the app.”

She reeled off the card number over the phone, but got disconnected before finishing.

“I remember getting off the phone and thinking, ‘How does he know about my Kroger card and how does an 11-year-old think of that?’” she said.

When they came home laden with bags, Michelle wanted an explanation. Chris had thought the Kroger card was a credit card and that, if he used it, he could pay his mom back.

The bill came to $14 and change, but when they learned the card wasn’t a credit card, they wound up in a quandary.

With only $10 between them (still short $4) they discussed which items they would have to return to the shelves—when a stranger standing behind them intervened, and came forward with a $20 bill to secure the boys’ supplies.

“We gave him his change and thanked him,” Dennis later told the News-Herald. “He didn’t tell us his name or nothing; I told him we would be allowed to give him a cup of free lemonade.”

The friends also pledged free lemonade to the Kroger security guards who kindly watched their bicycles while they shopped.

Touched by the stranger’s kindness, Michelle thought the story was worth sharing and posted it on Facebook in a bid to track the man down and pay him back.

“I didn’t know they had that planned or I would have made sure they had enough money, plus drive them there, lol,” she captioned.

The next thing Michelle knew, her post had over 500 likes. A local newspaper even ran the story, and it became their most read article in under 24 hours.

The friends have “an abundance of energy,” Michelle said, which they like to spend doing outdoor activities—such as running lemonade stands. This stand was their third, located at lemonade-selling “hotspot” the corner of Allen Road and Regina Avenue.

On their first venture, the boys had made $60 each, which went toward BMX bikes and entertainment at the local fair.

“I am shocked this story is getting so much attention,” the mom added. “It is a nice reminder that there are people out there willing to help others.”