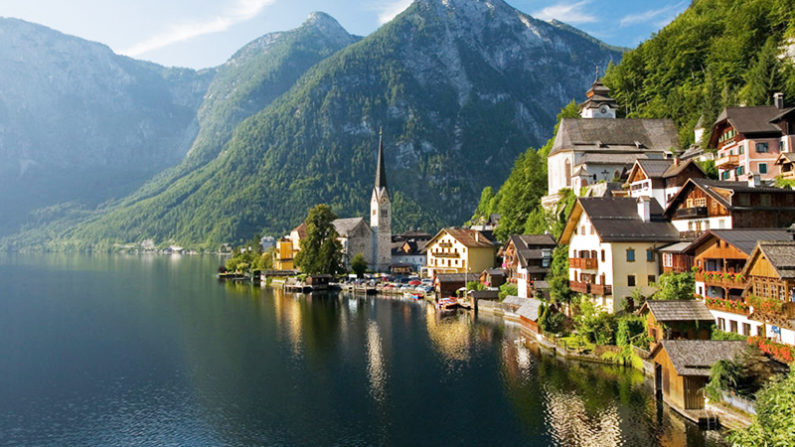 18 beautiful dream villages, as well as dreamed of being set foot even once

At times, we may desire to step back from the hustle of metropolitan life and embrace our instinctual calling: to return simpler times where people were more connected, in smaller towns and villages, and surrounded by natural beauty.

Such places still exist, though, like pockets of paradise scattered across the globe. From cultures of the far East to the West, hidden in deep mountains or remote valleys, such places hark back to our ancestral heritage, all but untouched by modern times.

Often recognized as cultural treasures now, some of these places are protected, thankfully, so we should enjoy their beauty and bring as much of it into our busy lives as possible.

The small fishing village of Reine is a rare gem located in the Norwegian archipelago of Lofoten. In addition to strolling through the beaches and enjoying the Arctic landscapes (with spectacular, magnetic phenomena appearing in the sky, often seen as lights, yellowish, sometimes even pink, blue, gray, or purple), guests can partake in activities such as hiking, kayaking, and fishing.

Rainbow Village, located in Taichung City, Taiwan, is a place where colorful drawings cover the walls of buildings and streets. The civil art project was initiated by former soldier Huang Yung-Fu in order to save the village from demolition—and it worked. The village has since become a protected cultural area, as well as a popular destination for tourists.

Situated between Lake Hallstatt in Austria and the towering Dachstein Mountains, Hallstatt is considered “the world’s smallest town.” Guests can enjoy the pure beauty of the lake while enjoying a ferry ride, explore the local salt mining history, or hike along the Echerntal Trail.

The village of Popeye in Malta was actually constructed as a movie set for the 1908s film “Popeye,” after which it became an amusement park with attractions such as boat rides and tours of a local distillery.

The breathtakingly scenic village of Wengen is located in the mountainous Oberland region in central Switzerland. There, guests may lodge in cozy, wooden villas and partake in activities such as windsurfing, rafting, or hiking in the lush, green valley.

The South Korean village of Hahoe in Gyeongsangbuk-do has been recognized by UNESCO as a World Heritage Site. The ancient buildings of the Joseon Dynasty were built according to traditional feng shui principles and have a lotus-shaped layout.

Dubbed the “Venice of the Netherlands,” Giethoorn is a riverside village nestled in picturesque scenery. The village is located in the heart of the Overijssel canal system, with an 88-kilometer-long waterway that allows you to visit ancient houses, museums, and eateries.

The originally white-walled village of Júzcar, located in the Spanish autonomous community of Andalusia, with red roofs, was painted over in blue for the premier of the 2011 movie “The Smurfs.” The original agreement was to paint the town white again after the celebration; however, a referendum was taken, and the village opted to keep the village walls smurf blue—perhaps because of the massive boost in tourist visitors during the months that followed.

In the coastal village of Kalk Bay, located in Cape Town, South Africa, you can shop and enjoy the local seafood cuisine. Running along the main road, you can visit antique shops, cafes, galleries, and restaurants.

The village of Bremm is famous for its wine production. In addition to touring the vineyards and discovering the local gastronomy, guests can also enjoy hiking, biking, and ferry tours along the winding, swooping oxbow of the Moselle river.

12. The Town of Bourtange, Netherlands

In the city of Groningen in the Netherlands, near the German border, there is the town and star-shaped fortress of Bourtange, which was completed in 1593, during the 80 Years’ War. At that time, the town itself was also star shaped. In addition to visiting battlefields, medieval buildings, and canals, visitors can tour four museums, several restaurants, and historic grocery stores.

Gordes is a medieval village at the foot of the Vaucluse Mountains in France. Known as the “Stone City,” movie stars and artists are attracted to the rustic town because its buildings, both old and new, are built out of stone, as are its streets; no fences are allowed, only stone walls; and all electrical and telephone lines are buried underground. The castle in the town center, which was rebuilt in the style of the Renaissance in 1525, attracts tourists, as does its honey, lavender essential oil, and sweet wine industries.

Located in southeastern Guizhou, China, the village of Qianhu Miao is considered the best preserved population of the Miao ethnic group. The village is well-known for its layer upon layer of closely connected, stilted houses built along the contour of a hill with the Baishui River passing along the base of the mountain.

In the new town of Idania, Portugal, on a cliff in Serra da Estrela, there is a medieval village called Monsanto. People built their homes among the granite boulders along the narrow streets where you will find boulders used as walls, floors, roofs, or even gates.

Bibury, located in Gloucestershire, United Kingdom, is nestled near the English Channel. The village has a 600-year-old stone lodge with small rooms, like a honeycomb, and has been dubbed “the most beautiful village in England” by decorator William Morris. It is also considered one of the most beautiful tourist destinations in the Cotswolds region of central England.

Located in Anhui Province, the village of Hongcun is nestled in the southwest of Huangshan Mountain, where more than 140 houses of the Ming and Qing Dynasty eras are preserved. Among them, the Chengzhitang or “three carvings” house is the most exquisite and magnificent, and has been turned into a museum. Hongcun was also recognized by UNESCO as a World Cultural Heritage site.

Near the edge of a cliff overlooking the North Atlantic Ocean in the Faroe Islands, Gásadalur Village was previously accessible only by boat or helicopter before a tunnel was dug in 2004. Here, adventurers can expect a breathtaking and unforgettable view.