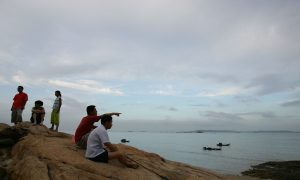 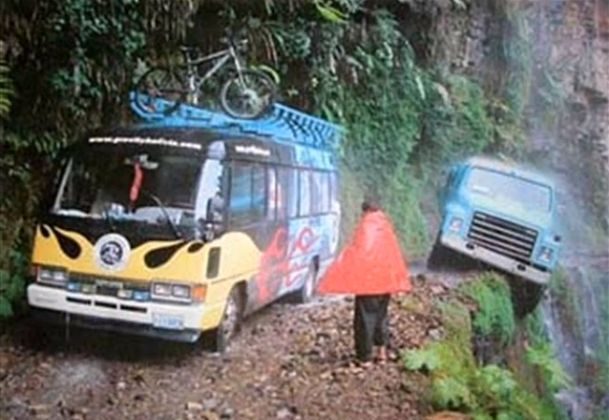 The most dangerous road in the world, from La Paz to Coroico, Bolivia (*Image via YouTube)
Destinations

The Mayon volcano buried an entire town and killed 2,200 people in 1814. The last slow eruption was in 2009, which steered many locals away, but also attracted a bunch of curious tourists. The volcano has been active since then.

The tour typically lasts for about an hour and is one of the most memorable ways to see the Hawaiian Island. However, more than 30 helicopter accidents have been reported since the 1990s.

If you think the last volcano trip isn’t too bad, try bungee jumping from a helicopter into a volcano—or at least, 710 feet (216.40 m) above it. Fortunately, there have been no reported fatalities from this activity (yet).

(Watch complete video on YouTube)
Known as one of the sacred Taoist mountains in China, its peak reaches more than 6,562 feet (2,000 m) high. With planks merely three boards wide, or 12 inches, tied along the rocky hill, any sane person would want to stay away from it.

(Watch complete video on YouTube)
The new cable car might be a less extreme option (or not, given China’s construction track record).

(Watch complete video on YouTube)
This one takes you much higher up, but at least you’re in a craft of some kind. For around $15,000, tourists can travel with a Russian jet pilot to the edge of space some 15 miles (24 km) above Earth. At that height, the sky appears pitch black and the earth glows blue.

(Watch complete video on YouTube)
At an elevation of 15,780 feet (4,810 m), temperatures rarely rise above 32 degrees Fahrenheit (0 degrees Celsius). With strong gusty winds and frequent avalanches, this mountain has taken many lives, roughly 30 a year.

(Watch complete video on YouTube)
If you want to swim and surf with sharks, go to New Smyrna Beach in Florida. It is located about an hour northeast of Orlando and is known as the shark capital of the world.

(Watch complete video on YouTube)
Every year from February to April, tourists can spend between $900 to $1,700 to dip themselves into sub-zero frosty sea water. With visibility of 49 to 164 feet (15 to 50 m), divers can see a wide variety of fish species and soft corals under the frozen surface.

(Watch complete video on YouTube)
This hazardous path stretches for 37 miles (60 km) from La Paz to Coroico, all without the safety of guardrails. At certain points, the road narrows to merely 10 feet (3 m), where some vehicles have actually fallen off the edge. Since 1995, it has been called the “world’s most dangerous road” and has killed as many as 300 travelers in a year.

(Annapurna Image via Shutterstock)
The track features breathtaking views and several famous Himalayan peaks, including Annapurna I standing at 26,545 feet (8,091 m)–the 10th highest peak in the world. To hike the entire 155 miles (250 km) circuit takes around three weeks. A newly constructed road will cut the first part of the 10-day hike to a 2-day drive. It is also the most statistically dangerous climb in the world in terms of fatality-to-summit ratio.

(Watch complete video on YouTube)
The 400 or so volcanoes in Azerbaijan shoot up 50-foot flames every few decades. But surprisingly, the bubbling mud and methane are actually cold.

12. Australia: Swimming with the Jellyfish

(Watch complete video on YouTube)
These box jellyfish are located on the northern coastline of Australia. Their venom is considered the most deadly in the world as it attacks the heart, nervous system, and skin cells.

(Watch complete video on YouTube)
The Zambezi is Africa’s fourth largest river system, after the Nile, Zaire, and Niger Rivers. It runs through six countries from central Africa to the Indian Ocean. If you like the thrill of kayaking and don’t mind the lethal threat of hippos, crocodiles, and bull sharks, this is the real deal.

(Watch complete video on YouTube)
Located in southwestern Massachusetts, it is the highest waterfall—200 feet (61 m)—in the state. The spot is beautiful, but also a dangerous destination for cliff jumping with its crumbling edges and uneven depth. It has claimed many lives.

(*The most dangerous road in the world Image via YouTube)