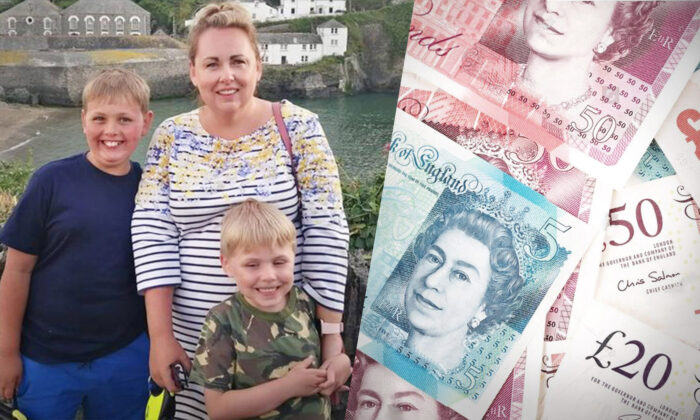 11-Year-Old Boys Find 400 Pounds on Ground—But Do the Right Thing, Turn In the Cash

Two 11-year-old boys biked into town on their own to buy candy and hang out one summer’s day in August—when they made a startling discovery.

They found a huge wad of cash on the ground in the market. But instead of pocketing the money, the pals decided to do the right thing by handing it to a market trader.

Lucas (who just turned 12) from Lancashire in North West England was out with his cousin Joshua for a bit of fun on their own—but their maturity was soon put to the test.

“They were planning to go to the local town center to have a walk around, buy sweets, and just get used to being without adults,” Lucas’s mom, Victoria Doran, 42, told The Epoch Times.

“This was only the second time they had done it, and it was just to prepare them for starting high school a few weeks later.”

The mom was out running errands with Lucas’s dad when he saw he had two missed calls from their son.

Lucas had sent a message: “Dad, we’ve just found some money and we have given it to someone on the market, but we think we might have done the wrong thing.”

The boys guessed that the wad of cash amounted to around 400 pounds (approx. US$550). Victoria since learned that it was considerably more.

“I could buy a hot tub with that!” Lucas told the newspaper.

The boys initially decided to guard their find while they decided on a course of action; one would stay put while the other found a responsible adult.

Lucas said that finding a market trader was “the obvious person.” Later, he wasn’t so sure.

His mom told him to snap a photo of the trader’s van so they had some identification; she worried that someone might have seen the boys pick up the money, and would identify them as being in possession of the stash. The trader told the boys he had passed the money on to the “markets department.” Victoria called the local police and forwarded the information to them.

A market superintendent took the cash to the police station, and the rightful owner, another market trader, was soon identified. Grateful, the trader sought out Victoria from the police and asked to meet the good Samaritans in person to thank them.

Lucas and Joshua’s moms are proud of their sons’ actions. “I was so impressed with their maturity and proud that they dealt with the situation in such a calm manner, given their age,” Victoria said. “It’s not something you think you need to tell them how to deal with.”

Lucas admitted feeling “a little bit cringe” about his good deed, and was amazed at how quickly people found out about it.

“We are both really pleased that the money got back to the person who lost it,” he shared. “It’s not a big deal to do the right thing.”

Victoria added. “We live in an area of Liverpool with significant issues regarding crime and antisocial behavior.

“It does just show that it doesn’t matter where your children are from, as long as you bring them up with strong values and respect for others.”