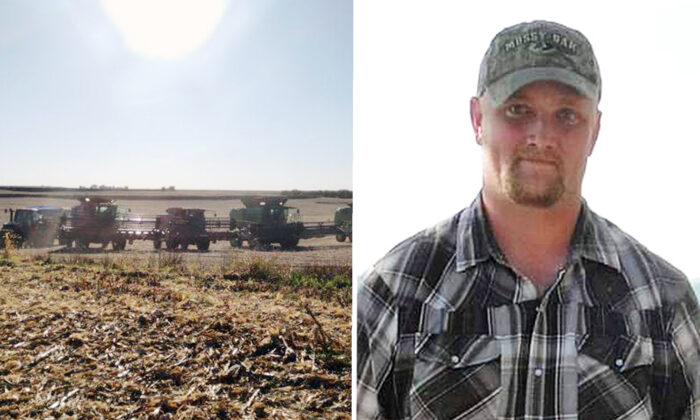 More than 100 members of a tight-knit Iowa farming community came together after losing one of their own to harvest the crops he left behind.

Cole Vanatta, who managed more than 2,000 acres of row crops just south of Tabor, Iowa, with his father and grandfather, sustained a farming injury on Sept. 9 and died two days later. He was 36 years old and is survived by his wife and three children.

Explaining the accident, Morse said the trio was trimming trees to clear a path for farm machinery when a tree limb snagged.

“Something that they take for granted, they do all the time, just went incredibly wrong that day,” he said.

In the wake of the tragedy, the farming community rallied together to pay their respects to Vanatta in the most fitting way, by helping harvest the corn and soybean crops that he had tended.

“A local farmer—a neighbor and a friend of ours—put a simple post on Facebook and said, ‘Hey, we’re going to get together, we’re going to honor Cole one last time,'” said Morse, who works as a Tabor city firefighter. “They had well over 100 people show up.”

The industrious group covered 1,000 acres in just two 10-to-12-hour workdays, starting on a Friday at 7 a.m. and finishing around 8 p.m. the following day.

Together, they ran more than 20 combines to harvest corn and two or three for soybeans. Morse estimated the group’s efforts reaped between 30 and 40 grain carts’ worth of produce in total.

“They just said, ‘I got this,’ and took over. It’s been great,” the mom of three told WLWT 5. “I’ll never be able to repay people for what they’re doing today, but I’ll try.”

Some had known Vanatta, but many had not.

“Even if they weren’t able to work in the field, they came in, they helped move stuff around, they dropped food off, they moved fuel barrels,” he marveled. “We had one person, because it was cold in the morning, just run in and get new propane bottles so we could run heaters. Everybody helped in whatever way they could.”

Even Vanatta’s and Morse’s children helped out. Morse hopes this heartwarming experience teaches his own kids that there are “things bigger than yourself” in life.

“Their uncle passed away, and that’s sad, it’s horrible,” he said, “but at the same point, their community showed up to help, just to show what that person meant to them.”

Vanatta, according to his brother-in-law, was a polite man who always kept his cool and would give the shirt off his back to help another. He had a talent for fixing anything with an engine.

For Vanatta, his family meant everything.

“He spent his whole life working the land and trying to build something for his family,” Morse said, “to keep a family legacy that he had going, and pass that on to the next generation.”

Morse said the farming community has been supporting its members in times of need for years.

“A lot of times it goes unrecognized,” he said. “Nobody’s asking for recognition … [but] it’s happening on a regular basis and it’s amazing to see these small communities come together and help each other out in that way.”

“I’m trying to think of the right words, but that feeling that you’re doing something bigger than yourself, for no other reason than it feels like the right thing to do, is something I think that we all need to take time to remember.”