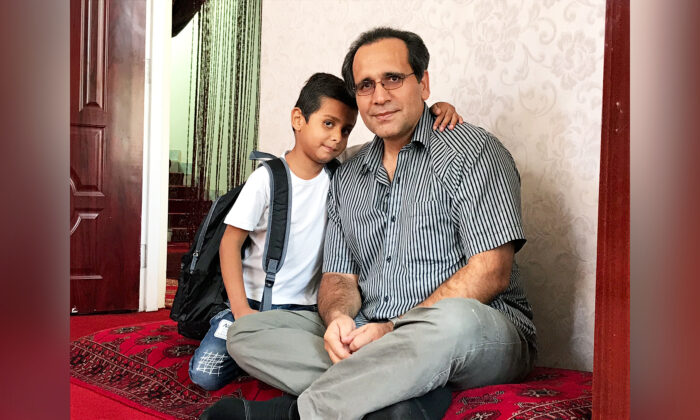 Amidst the chaos and scandal of the U.S.’s Afghanistan evacuation—as thousands flee the country, with many still stranded—a young Afghan boy successfully made the journey state side, to his new home in Florida.

After the collapse of the Afghan government in August, the process of adopting 10-year-old Noman, then caught between two very different systems, got even more complicated.

Afghan-born Bahaudin Mujtaba, 54, now a 20-year Davie, Florida resident, was lecturing at a university in Afghanistan around 2015 when he first met Noman, whose mother had passed away from cancer a few years prior. The boy was ill and on chronic medication, and Bahaudin started looking into the adoption process, which in 2017, was granted by the Afghan government at the time in the form of guardianship.

“In countries like Afghanistan, where it’s Islamic … their process is very different,” Bahaudin told The Epoch Times. “It was very, very bureaucratic and sometimes very corrupt, in terms of people asking for enormous amounts of ransom money for paperwork to be processed.”

He added, “Once we agreed to pull out our soldiers as of 2020, I knew that it was just a matter of time that the Afghan government might eventually transition to Taliban.

“Thereby, everything that we’ve done since 2016 might become obsolete or null.”

With the hiring of a number of Florida-based adoption agencies, and help from Senator Marco Rubio’s office, the State Department was contacted; and Noman was paired up with another adoptive father from Indiana in Afghanistan, who was bringing his own son home.

While en route to the airport in Kabul, however, they ran into trouble at a Taliban checkpoint, where chaos ensued.

“My son tells me that there was shooting, and often times the Taliban would be shooting in the air to disperse the crowd,” Bahaudin said. “Unfortunately, he did witness one man being shot, and then his wife grabbed him into her arms.”

He added, “The Taliban told them to come back the next day.”

Thankfully, the would-be travelers passed the checkpoint and reached Hamid Karzai International Airport, where they caught a military transport first to Qatar, then to Germany, before arriving in Dallas Airport on Aug. 26. There, Noman reunited with Bahaudin and met his adoptive mother for the fist time.

“It was a happy and joyous moment,” Bahaudin recalled with laughs. “I had tears in my eyes, and he was very joyful. We hugged and I think the hug lasted about a minute, he wouldn’t let go and I wouldn’t let go.”

Arriving at their home in Davie, the family are adapting to a new life—both Bahaudin and his wife of 33 years never had children of their own, and are caring for their son around the clock; Noman, who once spoke no English, was apprehensive about attending school, fearful that other kids would pick on him, but those fears were soon swept aside.

“His life has so far been very good,” Bahaudin said. “Luckily, that fear went away after he actually was in school.

“When we picked him up, he said it was fun, it was good, he was looking forward to next day. And then each day has been better than the previous day, so I’m thankful to his teachers and classmates who have welcomed him.

“His English is getting better, so I think it’ll take a few months for him to fully, or at least partially, understand his teachers. But he’s more confident now.”