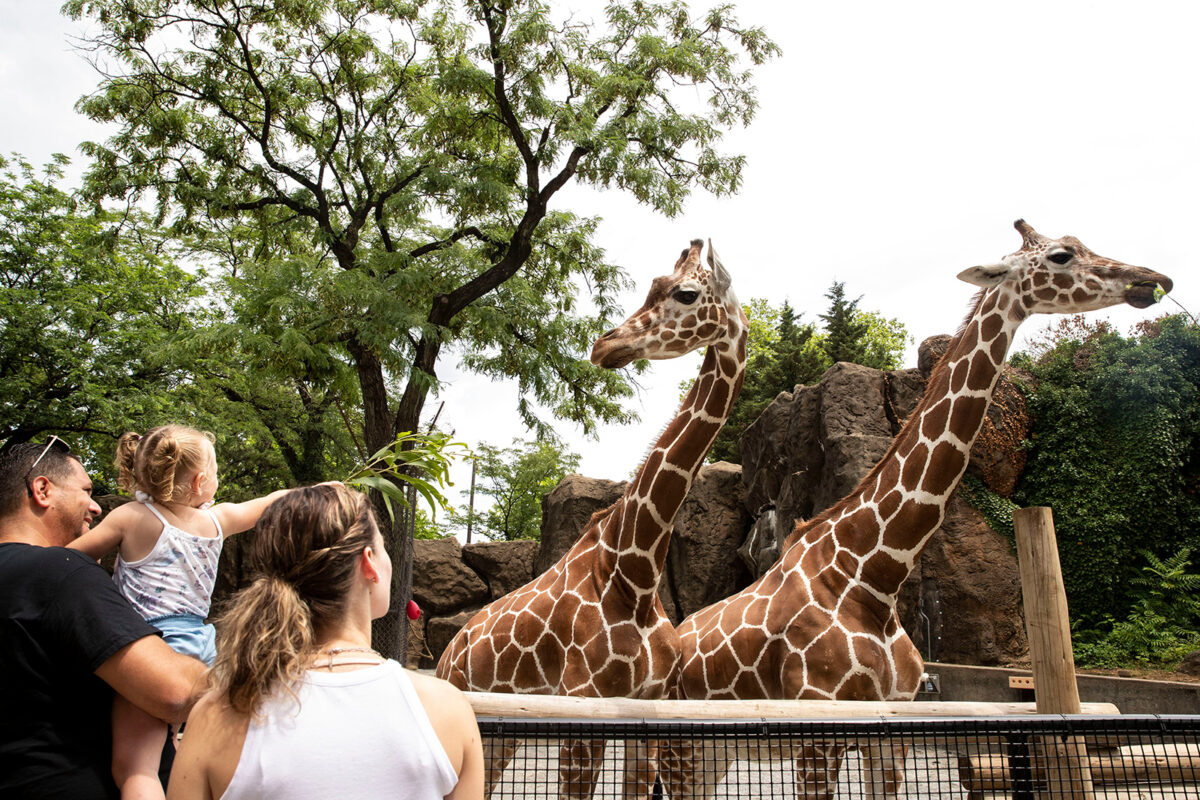 By Rita Giordano
From The Philadelphia Inquirer

Sunday was a great day for the Shore, but Erica Lapid, a resident of Somers Point, did the reverse pleasure commute.

She came to Philly with one purpose in mind: to feed the giraffes at the Philadelphia Zoo’s newest exhibit, Giraffe Encounter.

“She’s so cute!” Lapid cooed, as Stella, the zoo’s giraffe matriarch, lowered her long neck to nibble on an outstretched branch of acacia leaves. “Good job!”

To Lapid, it was definitely worth the trip.

These times, she acknowledged, have been anything but gentle or calm.

“I’m a psychotherapist. Our job has been particularly stressful, trying to support our people,” said Lapid, 35. “There is an innocence and playfulness about animals. This gives you a reprieve from the problems of the world.”

From the looks of things Sunday, an extra $6 ($5 for members) was a small price to pay for a bit of giraffe feeding therapy, and the zoo’s resident trio—Stella, Abigail, and Bea—seemed quite happy to oblige. A steady stream of zoo visitors queued up for a chance to interact with the gentle giants.

“Our new Giraffe Encounter is an incredible way for guests to get up close and personal with our tallest residents,” said Dani Hogan, the zoo’s director of mission integration. Hogan said the exhibit also helped the zoo ”enhance the lives of our giraffes.”

The new exhibit allows the giraffes more interaction with the public and gives them more space, Hogan said.

In the experience-oriented exhibit, guests are given a branch of browse—the name for the leafy treat people get to offer the giraffes.

Although the exhibit officially opened Thursday, Hogan said zoo staff have been getting the giraffes used to feeding from various folks for weeks.

Being such large animals that eat a lot of leaves and grasses—65 to 75 pounds a day—the giraffes, which seem to take turns feeding and pace themselves, have yet to show signs of getting full. But Hogan said zoo staff are keeping data.

“We’re being very scientific about this whole thing, and we are looking for what we call the saturation point,” she said.

Giraffe Encounter may also give people a greater appreciation of these creatures, which are listed as “vulnerable” by the International Union for Conservation of Nature. According to zoo staff, there are believed to be fewer than 100,000 giraffes surviving the wild, with their populations decreasing by more than 40 percent over the last three decades due to poaching and habitat destruction.

Zoo visitors seemed glad to get better acquainted with the three local giraffes.

“It was really cool,” said Ellie Roller, 6, of Bensalem, who fed Bea, the youngest, with her twin brother Lukas. “The giraffe came right to me!”

“It was nice because it’s interactive,” said Rachel Heinlein, 29. The family had just become zoo members, she added, so they’ll have ample chances to repeat the experience.

Quite a few visitors said the Giraffe Encounter, given recent events, comes at a good time.

“It kind of shuts off the outside world a little bit,” said Lauren Crammer, 34, of West Philadelphia, visiting the zoo with family members.

“It’s nice to get your mind off things a little,” said Ashley Abusaad, 31, of Warminster, visiting the zoo with her husband, Mohammed, 36, and their 23-month-old daughter, Layali.

Abusaad, a special education teacher with the Philadelphia School District, said she hopes to bring her students to the giraffe exhibit when classes resume.

Ama Armoo, 29, flashed a delighted smile as Stella munched at the acacia branch Armoo was offering her, and her boyfriend Allan Edzii, 29, took photographs. It was the Virginia couple’s last day of their first visit to Philadelphia, and feeding the giraffes was a great way to cap it off.

“At home, you’re around everything,” she said. “When you go to a place like this, it takes you outside of everything going on with a clear head.”