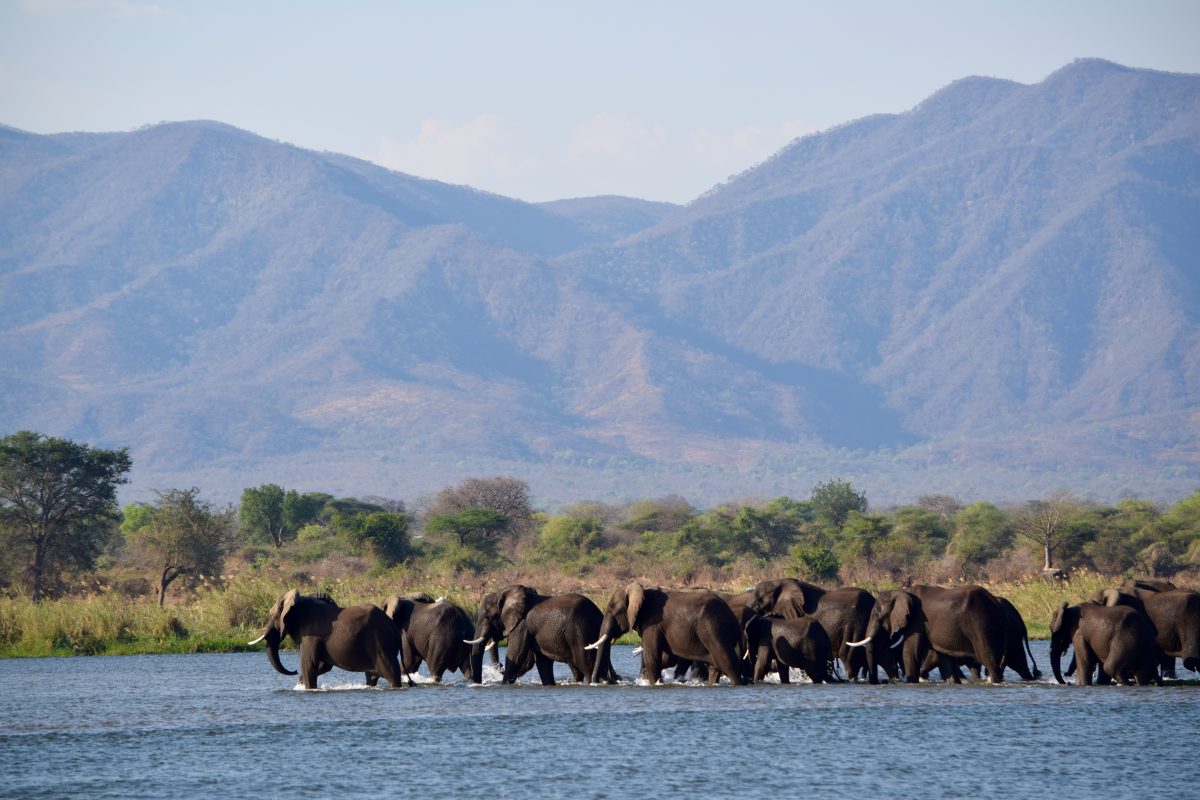 One evening we took a cruise down the Zambezi River. An army of fifty or so elephants plunged into the waters and swam, en masse, to a sandbar downstream. The folds and ridges of Zambiaâ€™s escarpment in the distance looked like a curtain that shielded our watery, green stage.(Giannella M. Garrett)
Travel

I stepped off the Cessna Caravan and into a veritable frying pan.

“Welcome to Hwange National Park,” greeted my guide, Richard Yohane, looking crisp and cool in his short-sleeved khaki shirt. Twenty-two hours after having departed an overcast wintry November morning in New York City, I had arrived at Zimbabwe’s largest game reserve. One hundred-and-ten degrees of fiery sun assailed my pores.

I tumbled into Yohane’s 4-by-4 along with four other American guests headed for Wilderness Safaris’ brand new Linkwasha Camp and scanned the scrubby horizon. Stark, dry, sandy grasslands, interrupted by surprisingly verdant mopane woodlands and the sprawling canopies of leadwood trees eyed me back.

Yohane steered his lime-green Toyota HiLux over a bumpy trail toward Hwange’s southeastern section. “This area was inhabited by Cecil for seven years,” he said, referring to the 13-year-old lion that made international news last July when he was lured outside the park illegally and killed by the trophy-hunting American dentist Walter Palmer.

Mention of the tragedy that touched the hearts of the world and sparked an international debate on trophy hunting reminded me why I had once vowed never to visit Zimbabwe. With its unstable government, corruption, and economic collapse in recent years, along with a history of colonial and white-minority rule, the country had struck me as hardly a vacation paradise. When I got an inkling things were improving, though, I decided to see for myself. I had travelled through nearby Namibia and Botswana and been dazzled by their landscapes and wildlife. How dysfunctional could a neighbouring country be?

Actually, as it turned out, pretty dysfunctional. No sooner had I tamed those fears and booked my trip when the Cecil calamity occurred. Weeks later, news broke about a controversial export of young lions and elephants from Hwange’s wild herds to Chinese zoos and parks. Then, just days before my departure, 62 elephants were poisoned and brutally butchered by Hwange rangers disgruntled over pay.

About the size of Belgium, Hwange possesses the highest diversity of mammals of any national park in the world and one of the largest elephant populations on earth. Would there be any animals left when I got there, I wondered?

Yohane’s 4×4 rumbled to a stop on the sandy shore of a large waterhole fringed with towering Ilala palm trees. About 30 wild elephants were cooling off in the pool. Rumbling with pleasure, a few raised their trunks, like garden hoses, and sprayed each others’ backs. Two of the largest bulls eyed us with suspicion, ears flared, ready to charge if provoked. But the females and calves tended to themselves. We sat, awestruck, for close to an hour, then made our way to camp.

For the next four days, Yohane led us to various waterholes to observe the abundance of wildlife that congregate at these pans during dry season. This vast eastern extension of Botswana’s Kalahari Desert lacks natural rivers, so wildlife depend on artificially pumped water from April through November. Fourteen waterholes in the private Linkwasha Concession pump about  26,000 gallons of water every 24 hours. Animals flock to them day and night. Like clockwork, one herd files in as another parades off. Among the species quenching their thirst at the pans we saw zebra, giraffe, eland, sable, wildebeest, and even the rare roan antelope.

One afternoon, Yohane drove me to Ngamo Plains, affectionately referred to as the Serengeti of Hwange. Rainy season floods transform its vast fossil-rick lake bed into verdant, savanna grassland. Mopane woodlands, teak forests, and spiny acacias abound. A multitude of wildlife flocks there. Yohane navigated in the direction of a small grove, the sun’s rays pitching straight onto our faces. Squinting, I made out the backlit silhouettes of an African hawk perched between two tawny eagles on a bare branch.

Yohane rolled the vehicle slowly toward a massive acacia tree rising through a sandy gray termite mound. There, at the base, panting in the sweltering afternoon heat, lay a radio-collared lioness with three young cubs.

Among the species quenching their thirst at the pans we saw zebra, giraffe, eland, sable, wildebeest, and even the rare roan antelope.

“That’s Cecil’s daughter and three-month-old grand cubs,” Yohane whispered. In the late afternoon light, the cubs’ coats glimmered a soft golden. Tan spots whimsically freckled their underbellies and legs. They snuggled against their mother and mock-growled at each other. As I watched, I felt a calm reassurance that wildlife at Hwange might find its way to continue, despite human interference.

The following morning on the way to the air strip for the next leg of my trip, we stopped at Madison Pan, the most photogenic waterhole I had yet to see at Hwange. I climbed up a viewing platform, a sort of treehouse designed for overnight guests to view wildlife after dark, and watched as a herd of elephants frolicked in the blue lagoon. Under the shade of a nearby teak forest that flanked the waterhole, another herd patiently awaited its turn to enter.

My plane followed the Zambezi River, Zimbabwe’s natural northern boundary with Zambia, for most of the two-hour flight eastward to Mana Pools National Park. A UNESCO World Heritage site near Zimbabwe’s northeast border with Mozambique, its remote location renders it less frequented than Hwange and Victoria Falls.

Newly arrived, I settled in at Rukomechi Camp, on the banks of the Zambezi. In contrast to the arid savannas at Hwange, the wetlands that spilled from the riverbanks at Mana Pools exuded a sense of bounty. A group of elephants waded through the lush green vegetation, helping themselves to the greens along the way. A family of vervet monkeys frolicked in the marshes. Barrel-shaped hippos bathed in the cool sludge. The folds and ridges of Zambia’s escarpment in the distance looked like a curtain that shielded our watery, green stage.

One evening we took a cruise down the Zambezi. Forests of mahogany and ebony, those glamorous hardwoods, ascended beyond the shore. The occasional alpha male hippo burst out of the water, snorting disapproval, with a mouth opened wide enough to swallow one of us whole. We floated next to a steep riverbank where a swarm of carmine bee-eaters darted and twirled from their nests in the pockmarked mud to nearby trees.

The most spectacular sighting occurred when an army of 50 or so elephants plunged into the Zambezi and swam, en masse, to a sandbar downstream. Four young bulls brought up the rear, kicking and splashing like over-energized adolescents. The burnt orange flames of the sunset glorified their magnificent forms.

The next day found me in my tent, relaxing with a book after lunch. Without warning, a shadow intruded across the stream of sunlight pouring through my screen window. I looked up to see a young bull elephant, legs towering above my door frame, no more than a foot from my tent. He began munching the branches of a large mahogany tree. I watched, in breathless silence, aware that with one casual kick this monumental creature could destroy my tent—and possibly me along with it. After about 10 minutes, he strolled off as quietly as he had appeared.

Next up was a flight to Victoria Falls, my third and final stop in Zimbabwe. When we arrived, a friendly Zimbabwean with a round face and open smile escorted me to his air-conditioned van and handed me a cold bottle of water from his ice chest. He drove me to the border crossing, about a mile before the historic Victoria Falls Bridge, where I would depart for a camp in Zambia.

I bid my driver goodbye and handed him a pair of reading glasses, one of the small gifts I had brought for just such an occasion. His cheerful face broke out in an expression of pure joy. “Now my wife and I will be able to read our Bible at night,” he said, thanking me.

At that moment—in the thrall of Zimbabwe’s people, the majesty of its landscape, its abundant wildlife, and despite its many problems—I vowed that I would return.