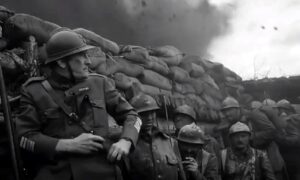 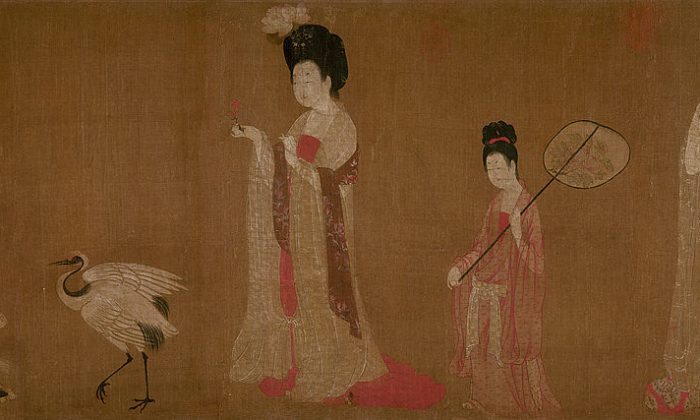 During China’s prosperous Tang Dynasty (618–907), a period in which high culture flourished, the genre of painting “beautiful women” reached considerable heights. And ranking above all Tang masters for utmost stylization in portraying the female figure was Zhou Fang (ca. 730–800).

His exquisite silk hand scroll “Court Ladies Wearing Flowered Headdresses” (now held by the Liaoning Provincial Museum in China’s Shenyang province) is a rare jewel that allows us to glimpse the remarkable achievements of not only Tang female portraiture but of fashion at the time.

Feminine beauty and the flower became one, as they both evoked the ephemeral nature of youth.

In this piece, Zhou Fang portrays five court ladies with one maidservant. To the right, two ladies play with a dog and one lady teases it with a duster. In the middle, we see another court lady admiring a red flower in her hands as a crane strolls past. A maidservant holds a fan and appears smaller than the ladies, not because of an intention on the artist’s part to show physical depth, but rather to show hierarchical scale by signifying her lower status.

To the left, a court lady with clasped hands adds a sense of depth to the composition. Another lady stands beside a blooming magnolia tree, and just as she catches a butterfly, she shifts her attention to a dog running toward her.

There is great intimacy between the court ladies and the animals as they keep each other company. Their relationship can be interpreted to represent the carefree life of noble women in the imperial palace. Ironically, a mood of languor and a sense of poignancy permeate the ladies’ countenances, as perhaps they share each other’s loneliness.

Feminine fashion and beauty of the Tang Dynasty can also be perceived through this piece. The rounded faces and slightly plump figures (by today’s standards) represent the Tang ideal of feminine beauty. Their fair complexions are a result of the powdered white pigment applied to their faces. Their eyebrows are depicted like butterfly wings, while their lips are cherry-like. High coiffures were also characteristic of aristocratic Tang women and were often embellished with peony or lotus flowers, as well as gold ornaments called jinbuyao.

Under their delicate silk gauze scarves can be seen long, elegant gowns embroidered with floral patterns and geometric motifs. Zhou Fang uses rich colors of scarlet, crimson, and ocher for the underlying dress and more subdued tones for the gauze to depict its translucency. The relatively low neckline and nearly floor-length sleeves of the gowns, and the wide gauze scarves worn as stoles or draped across the arms are all characteristic of the high court fashion of the Tang Dynasty.

The flowers that adorn the ladies’ hair speak to the title of this piece. Whether it’s wearing flowers in their hair or holding one in their hands, the court ladies seem to admire the beauty of the blossoms. Feminine beauty and the flower become one, as they both evoke the ephemeral nature of youth. Just as a flower wilts, youth and beauty fade.

Famous Tang poets like Li Bai frequently juxtaposed these two ideas in their poems. Literary accounts have also revealed that the Tang Emperor Xuanzong would release a butterfly during his springtime banquets and choose a partner based on whose flower it landed on.

Mike Cai is a graduate of the New York Fei Tian Academy of the Arts and currently attends the University of California–Berkeley.