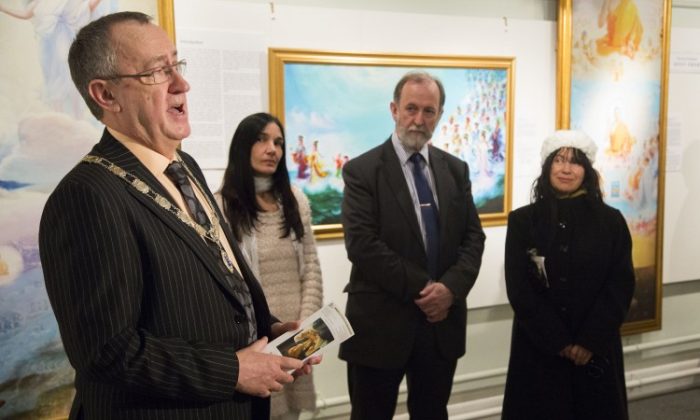 Zhen Shan Ren Exhibition Linked with Spirituality and the Holocaust

The Art of Zhen Shan Ren International Exhibition has toured the world since 2004. It came for a month-long stay at the Kingston Museum in the tree-lined south of London, UK, at the end of January.

The Deputy Mayor of the Royal Borough of Kingston Upon Thames, Cllr Barry O’Mahony, opened the exhibition.

He comes from the Republic of Ireland where the national religion is Roman Catholicism, the world’s largest Christian Church.

Looking at Yuan Li’s painting “A Tragedy in China”, he made allusion to its spirituality, saying it was like a Christian painting.

The artists of The Art of Zhen Shan Ren describe their work as neo-renaissance as it has associations with the techniques of the predominantly spiritual expression of European Renaissance painting and sculpture in the 15th an 16th centuries.

A large part of the work from that time manifested imagery taken from the New Testament of the Bible where four different books tell the life of Jesus, the Messiah (Christos) of Christianity. Christos in its Hebrew form means the anointed one and it was also used for a savior in the Old Testament.

A great deal of Renaissance art was also devoted to Greek and Roman myths and gods. It told of interactions between these celestial beings and humans. In fact it was from the rediscovery of artworks from ancient Greece and Rome that the European Renaissance of the 15th and 16th centuries got its name. It was a rebirth of the realist art of Greece and Rome before and after Jesus.

Besides its imagery, the Renaissance showed an upsurge of representational art, realism, and clarity of composition, colour, and execution.

Cllr O’Mahony saw this as well. “Apart from anything it is beautifully done,” he said, “the face, the pose with the crossed arms. The beauty and the defiance, I suppose.”

The defiance or determination has been noted in other paintings in the Exhibition. It is a resilience, forebearance or tolerance of the immense persecution of Falun Gong in China today.

Falun Gong is spiritual way of life adopted by followers of Li Hongzhi. He adapted the ancient practice for modern living and began to teach it in public in China from 1992.

The Chinese Communist Party regime (CCP) had given it prizes such as Star Qigong School in the Asian Health Expo in Beijing and its health enhancing properties were extolled by CCP officials. By 1999 the CCP estimated that 70 million people were practicing Falun Gong in China.

Yet because Falun Gong’s followers would not forgo their belief in Truth, Compassion, and Forebearance (the Zhen, Shan, Ren of the Exhibition’s title) Jiang Zemin, the leader of the CCP at the time, gave a secret decree that Falun Gong should be wiped out: “Ruin their reputations, cut them off financially, and destroy them physically,” “those beaten to death are to be considered suicides,” “[once they are dead] there is no need to verify their identity, directly cremate their bodies.”

Cllr O’Mahony made allusion to persecution of Falun Gong being similar to the Holocaust of the Jews in the Second World War. “My own background is from Western Ireland as a Catholic. I had very little background to the Holocaust either,” he said. “In my role I had to learn about that also.”

It had been Holcaust Memorial Day a few days before he opened the Art of Zhen Shan Ren Exhibition.

“The comparison is valid,” he said, “in a sense of a group of people wanting to make sure that people like me learn about it and carry the story on to another generation.”