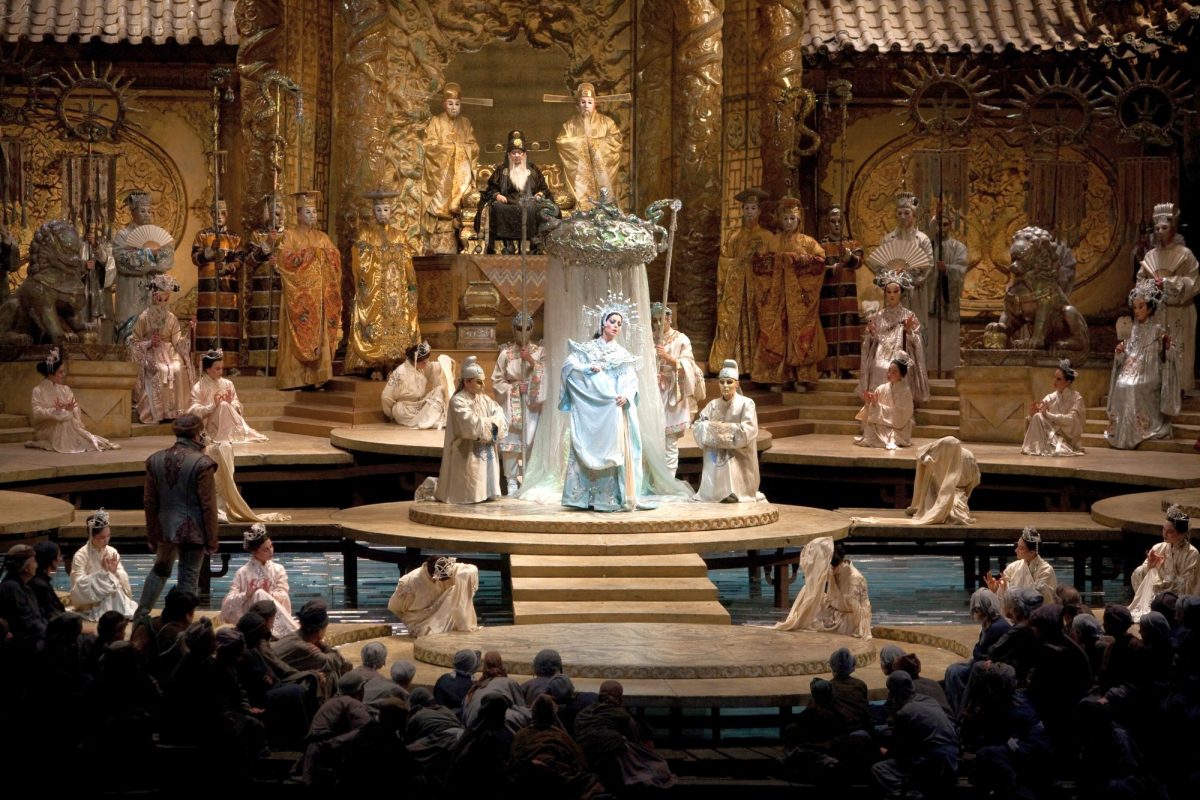 NEW YORK—Franco Zeffirelli’s production of “Turandot” at the Metropolitan Opera is visually spectacular, but since this is a Puccini opera, the audience won’t leave humming the scenery. With the Met’s top-flight orchestra, chorus, and strong cast, the music casts its own spell.

Although “Turandot” takes place in ancient China, the work is based on a 1762 play by Italian writer Carlo Gozzi. Like Verdi, Puccini’s talent lasted until the end of his life. In fact, “Turandot” was unfinished at his death in 1924 and completed by Franco Alfano.

While Puccini was usually attracted to weepy stories, like “Madame Butterfly” or “La Bohème,” “Turandot” is not especially heartwarming.

Icy Princess Turandot is eligible to be married, but the dating ritual is deadly; suitors have to answer three riddles or die. At the beginning, the Prince of Persia is beheaded for failing the test. Calàf is among the onlookers and strangely decides the princess is the woman for him.

Coincidentally, he recognizes his long lost father, the exiled King Timur of Tartary, in the crowd. The old man is traveling with Liù, a slave girl, who readily admits that her feelings toward Calàf are the reason she continues to care for his father.

When Calàf announces his intention to win Turandot’s hand in marriage, his father and Liù tell him he’s nuts. Three comic characters—the ministers Ping, Pang, and Pong—also try to discourage him.

In the second act, Turandot appears and relates how her ancestor, Princess Lou-Ling, was kidnapped and murdered by an enemy army. As a result, Turandot is determined never to marry and to carry out revenge on any suitors.

Calàf answers her three riddles, but he inexplicably gives her another chance to execute him. He declares that if she can learn his name by dawn, she can have him beheaded.

Turandot issues a proclamation that no one can sleep until the stranger’s identity is discovered. Soldiers capture Timur and Liù and bring them before the princess. She orders them to speak. The slave girl says that she alone knows the suitor’s name but refuses to answer even when she is tortured. She grabs a dagger and, declaring her love for the stranger, kills herself.

Suddenly, the princess softens her resolve, and Calàf then reveals his name. Liù is quickly forgotten and the two lovers go off to live happily ever after.

There was a 45-minute wait after the first intermission, but the audience didn’t complain. In fact, even though the music was playing, they burst into applause when they saw the Peking Imperial Palace. Whatever gold wasn’t used in the set rained down on the assembled masses on stage at the end.

The title role in the opera calls for an almost Wagnerian sound—it was probably the finest Italian role of Birgit Nilsson—and here was performed by Lise Lindstrom, an American soprano who has made a specialty of the part at the Met and around the world. In fact, it was her debut in this role at the Met in 2009 that brought her international recognition. Her big voice soared over the orchestra in her famous aria “In questa reggia.”

As Calàf, tenor Marcelo Alvarez made a strong impression, bringing the house down with his “Nessun dorma.” While he belted out that showstopper, his entreaty to Liù not to cry (“Non piangere, Liù”) was sensitively done.

The most appealing character in the opera is the slave girl Liù, and soprano Leah Crocetto (from Adrian, Michigan) is making a terrific debut in the part. Her aria in Act I, “Signore, ascolta,” was truly beautiful and moving.

Bass-baritone James Morris, who first appeared at the Met in 1971, is solid as Timur. The Ping, Pang, and Pong of Dwayne Croft, Tony Stevenson, and Eduardo Valdes were well sung, even if the supposedly humorous roles are the weakest element in the opera.