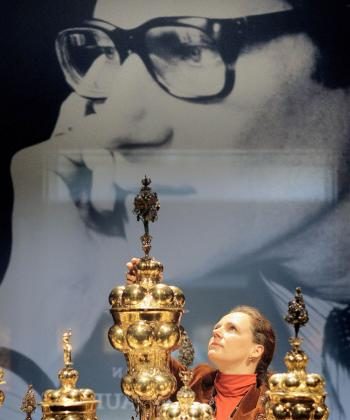 A Christie's employee poses with a a German parcel-gilt table fountain during a tour of an exhibition of 'The Collection of Yves Saint Laurent and Pierre Berge' at Christie's auction house in central London, on Jan. 29, 2009. (Shaun Curry/AFP/Getty Images)
Arts & Culture

By Epoch Times Staff
Print
In less than two hours on Monday, Feb. 23, during the first evening of the three auction sessions on Yves Saint Laurent–Pierre Berge's art collection, a new record has been set for future art auctions, 206.15 millions Euros (265 millions dollars.)

More than 700 works accumulated by Yves Saint-Laurent and Pierre Bergé, his mentor, during their 50 years of common life, were auctioned between Feb. 23 and 25, following the death of the French fashion designer in June 2008. Pierre Bergé explained that keeping their art collection made no sense anymore now that Saint-Laurent had gone. Art lovers had eagerly waited for the date, as shown by the formidable fights between bidders—most of them bidding by phone—which made a past of the former record reached in New York City in 1997, when art works owned by Victor and Sally Ganz where auctioned for a total of 163 millions Euros.

Monday 23rd 's auction, organized by Christie's, was attended by nearly 1,200 bidders and mundane passer-bys. It was dedicated to impressionist and modern art pieces, and the financial result made clear that the economic crisis did not empty all pockets. After a cold bid on the first few pieces, buyers smashed seven world records. For instance, Madame L. R., a sculpture from Constantin Brancusi, was bought for 28.1 million Euros—versus its estimated value of 15 to 20 millions Euros.

Among other impressive pieces, a piece from 19th Century French painter Gericault, was bought for 8 millions Euros, the highest price ever for this artist. The Portrait de la comtesse de La Rue from Ingres also did hit a record at 2.1 million Euros.

The auction on Tuesday, Feb. 24, focused on silversmith works, miniatures and home furniture, beating four new records in this category. And finally, on Wednesday, Feb. 25, tens of inestimable antiques, including two bronze Chinese sculptures of a rat and a rabbit head were auctioned. These two works were vehemently claimed by the Chinese regime's delegation in France, whose legal complaint was rejected by French justice on the 23rd of February. Pierre Bergé commented to the media: "I would be entirely open to offer these two works to China, the only thing I would like to ask China as a compensation to respect human rights." A comment that, according to a spokeperson from the Chinese government, is not relevant to the question. But diplomacy is an art, too, and Bergé seems to try to auction this in a different way.