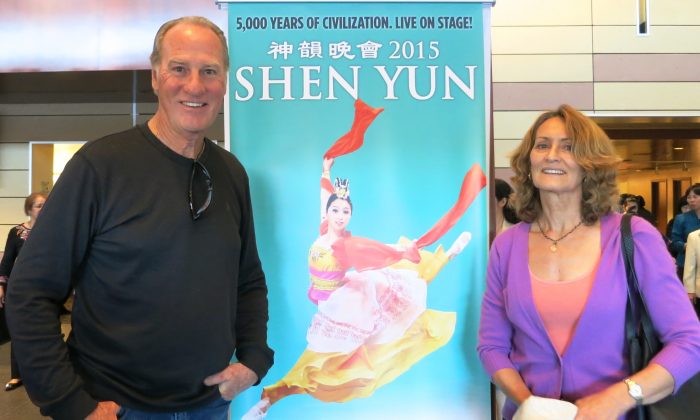 Craig T. Nelson is an actor, writer, director and producer, well-known for the long-running television series “Coach” in the 90s. His feature film credits include the voice of Mr. Incredible in The Incredibles; Blades of Glory with Will Ferrell; Devil’s Advocate, co-starring Al Pacino and Keanu Reeves; and Ghosts of Mississippi with Whoopi Goldberg and directed by Rob Reiner. He now stars on NBC’s drama series Parenthood.

“Obviously they have worked so hard at what they do, and it shows. It just comes across as effortless, beautiful, elegant, very, very moving, down to the tiniest gesture. Just down to the tips of the fingers,” he said.

Mrs. Cook-Nelson has been teaching Tai Chi Chuan publicly and privately since the 1970s. She has served as National Tai Chi Chuan Association president, vice president, and park director from 1971–2007 and is a member of the Jian Mei Internal Martial Arts Association.

“The movements were elegant,” Mrs. Cook-Nelson said of Shen Yun. “The movements look so simple, but the dancers’ lives are dedicated to making those moves.”

Mrs. Cook-Nelson has been to China multiple times and studied the martial arts culture extensively, but she said she learned some new things from the performance.

“I learned a lot, but I have to tell you, I cried twice,” she said. “I know how much trouble the Chinese went through for decades.”

According to the Shen Yun website, “Sophisticated dance techniques, an orchestra joining instruments from both the East and West, beautiful costumes, and a stunning back drop—this is Shen Yun at first glance. But digging deeper, one discovers a sea of traditional Chinese culture. Mortals and divine beings merge on stage as one. Principles such as benevolence and justice, propriety and wisdom, respect for the heavens, and divine retribution, all come to life, washing over the audience.”

Although the Chinese Communist Party has for decades launched various campaigns, such as the Cultural Revolution, to attempt to destroy these traditions and values, Shen Yun seeks to revive this culture and share it with the world, says the website.

Shen Yun made a big impression on Mr. Nelson, but it also brought up some profound emotions.

“Sadness and elegance, a kind of a joy, a wonder, kind of an innocence about it,” he said. “It was just an all-around experience.”

Mr. Nelson said all the different parts of the performance came together wonderfully. The dancers were very athletic, yet such great actors and performers. He thought the choreography, the music, the costumes, and the vocal soloists were all extraordinary.

Mrs. Cook-Nelson said she felt the quality of the performance was linked to the artists’ dedication to traditional Chinese culture.

With reporting by NTD Television and Sarah Le