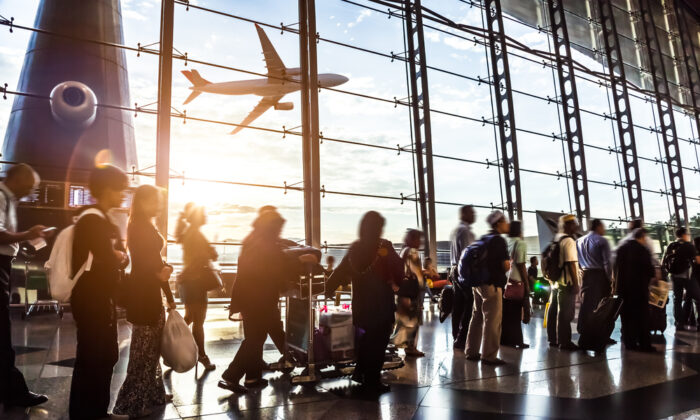 Your Most Burning Travel Questions, Answered

Heading home for the holidays or jetting off to the snowy ski trip of your dreams? Travel is the stuff that makes life worthwhile, but enriching as it is, it doesn’t come without the occasional hassles and headaches. So you can handle whatever situation comes your way during this busy travel season, we tackle sticky travel questions to help you better understand the ins and outs of flying commercial. Whether you’re merely curious or facing a full-on crisis, the answers to these travel questions can help your holiday travel plans move forward more smoothly.

What does it matter how much my luggage weighs?

If you’ve ever had to dig through your overstuffed luggage to adjust belongings to fit within an airline’s baggage weight requirement, you’ve likely wondered why a five-pound overage matters or what the big deal is with your bag’s weight in the first place. Luckily, the answer here is pretty straightforward: it’s both for practicality reasons and for the safety of your flight.

Weight limits on single pieces of luggage exist because each bag has to be manually loaded and unloaded by a human being, and baggage handlers often have to manage hundreds or thousands of bags on each shift, a physically taxing line of work. Weight requirements are necessary both to protect the health and safety of the handlers and to ensure that passengers can manage their bags on their own.

This applies whether the bags are checked or carried on to the flight, where each passenger is responsible for safely stowing his or her own piece of luggage in the overhead bin or at their feet. Bringing luggage that you can’t easily lift on your own necessitates the help of other passengers or airline personnel, and this is not always available and shouldn’t be expected.

In addition, each aircraft must meet certain weight and balance limits in order to function properly, and all aircraft have a specific center of gravity they must maintain in order to be able to fly, avoid strain, and remain within the expected fuel efficiency range. An overweight aircraft will have difficulty taking off, and thus weight and balance must be carefully calculated in order to avoid any mishaps or equipment failures. Airlines have to know what to expect weight-wise to ensure every flight is able to be completed safely.

Why do I have to put my phone on airplane mode?

A perennial question for travelers. No one seems to be quite sure why flight attendants on every commercial airline around the world demand that all passengers switch their cell phone to airplane mode or turn it off entirely. Most speculate that it’s because cell signals interfere with a plane’s navigational equipment or garble some mysterious vital frequency, causing potential harm and confusion in the cockpit. And no one wants to be on a plane at risk.

However, an article in Business Insider cites a pilot who revealed that mobile phone signals have never actually been proven to mess with an airplane’s performance, though the situation is theoretically possible. Rather, FCC regulations ban cell phone use to “protect against radio interference to cell phone networks on the ground.” According to the article,  “… at 40,000 feet in the air, active cell phones would be picking up service from multiple cell towers on the ground. This could crowd the networks on the ground and disrupt service.”

What happens if I’m denied boarding?

Do I have any rights if my flight is delayed or canceled?

Few travel situations are more of a bother than facing an extreme flight delay or full-on cancellation, which may leave travelers stranded partway to their destination or unsure of how to get where they’re going without repurchasing tickets. Between the unexpected WOW Air shutdown and the collapse of Thomas Cook Airlines, some air passengers worry about what will happen if they fall victim to the next poorly timed airline closure.

Typically, the airline will assist passengers in completing their trip at no additional cost if the flight issue is the fault of the airline or unavoidable circumstances like weather, but this is not always evident or easy to arrange.

Under EC 261, which covers all flights on European carriers traveling to and from the European Union, passengers are entitled to file a delayed flight claim of up to $700 if they arrive to their destination more than three hours later than planned, and this applies to all flights within the past three years, so you can file a claim even for that flight fiasco you faced in 2017.

There’s a dog on the plane. What if I have allergies? Do I have any rights?

The nearly complete elimination of peanuts on planes has left many allergy sufferers wondering, “What about me?” Although we’ve seen a steep decline in free peanut packets passed out on planes, the rules around bringing dogs on planes seem to have grown lax in the meanwhile, despite the fact that there are many individuals allergic to pets and the dander they emit.

So what happens if you’re highly allergic to animals, yet end up seated next to a service dog or a small pet being stowed under the seat near your feet? Unfortunately for the allergy-prone, the U.S. Department of Transportation requires air carriers to permit dogs and other service animals used by people with disabilities, and these do not count toward any pet limit the individual airline might employ; for example, Delta limits the number of total pets per flight to two in domestic first class and four in the main cabin, and arrangements to bring a pet aboard must be completed in advance.

However, if you’re allergic to animals and find yourself near one on a plane, the airline should attempt to accommodate you by reseating you away from the animal or offering you a seat on the next available flight, if necessary.

Does it really matter what day and time I book my flight? Do the prices differ? If so, when is the best time to book a cheap flight?

“How far in advance you book is one of the key variables in determining whether you get an expensive flight or a cheap flight,” shares Scott Keyes, co-founder and Chief Flight Expert at Scott’s Cheap Flights, a hand-vetted cheap flight fare alert service. “The most common mistake people make is waiting until the last minute to book long flights. In the last week or so before a flight, fares tend to skyrocket.”

Keyes adds that there is no single, predictable “best time” to book flights; instead, cheap flights pop up all year round, and the key is to book well in advance. Keyes recommends one to three months for domestic flights and two to eight months for international flights in order to find the best fare possible.

I have to take an unexpected last-minute flight. Shouldn’t the ticket be cheaper if the flight has open seats remaining and they have to make the trip regardless?

“This used to be true 20 years ago; airlines would slash prices to fill unsold seats,” Keyes explains. “But nowadays, airlines jack up prices on unsold seats, knowing that it’s mostly business travelers booking in that last week, and they don’t care about the price because it’s their company paying, not them. The airlines would prefer to fly with empty seats if that allows them to charge higher prices to business travelers who book last-minute.”