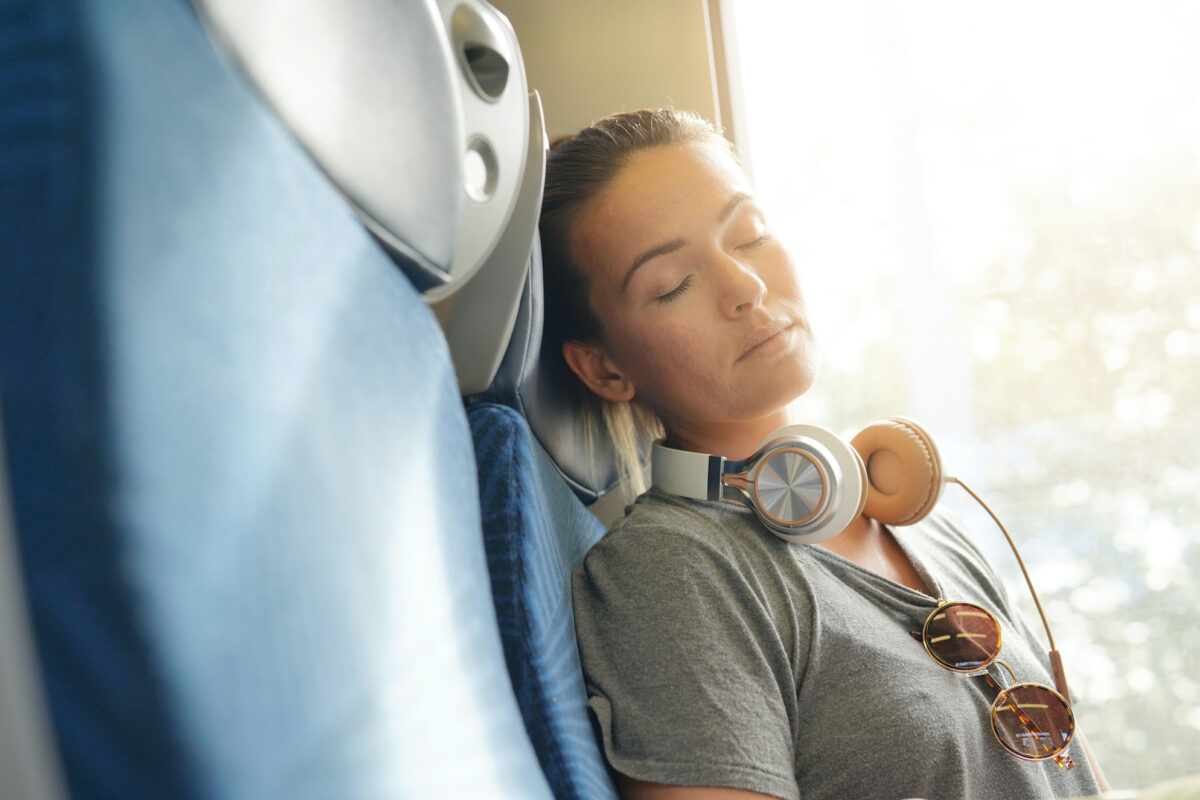 Researchers have new insight into how the sleeping brain reacts when our ears pick up unfamiliar sounds.(goodluz/Shutterstock)
Sleep

Your Brain May Be Listening to Strangers—Even While You Sleep

New study offers insight into how our brains work by looking at brain activity changes during sleep
BY Jennifer Margulis TIMEFebruary 5, 2022 PRINT

Ever awakened from a dead sleep, certain that something was wrong? Something woke you up, yet you have no idea what or why?

We all know that the brain can respond to the environment during sleep. If it didn’t, your alarm clock would never wake you up in the morning. But exactly how the brain responds to outside stimuli is a lot less clear. Sleep is inherently mysterious. As humans, we analyze the world using the cerebral cortex, the part of the brain which essentially disconnects during sleep. In fact, sleep scientists have found that communication between different parts of the cerebral cortex, abuzz with connection while you’re awake, stops during sleep, according to research published in 2005 in Science.

Now a new study from a sleep laboratory at the University of Salzburg in Austria, “The Brain Selectively Tunes to Unfamiliar Voices During Sleep,” published Jan. 17 in The Journal of Neuroscience, sheds a little more light on how our brains process auditory input during non-REM (rapid eye moment) sleep, that is, when we aren’t actively dreaming. This Austrian study suggests that our brains constantly monitor the environment for threats even when we are unconscious.

In the new study, doctoral candidate Mohammed S. Ameen and a team of three other researchers reanalyzed data gathered by the same lab for a 2018 paper. In the experiment, 17 young adults (14 females and three males), slept two nights in the lab. During the first night, the subjects became acclimated to the unfamiliar environment. On the second night, the sleepers’ physiological functions were recorded throughout the night.

The scientists wanted to learn how the brain responds to audio stimuli during sleep, and how brain waves change in response to specific stimuli.

For each subject, the researchers made sure the volume was loud enough to be heard but not so loud that it disturbed the subject’s sleep. Then, the audio recordings were played in a random order for periods of 90 minutes at a time, separated by 30 minutes of silence, for a total of four 120 minute cycles.

Interestingly, the scientists detected no apparent difference in the sleepers’ response to familiar versus unfamiliar names. However, brain-wave responses to unfamiliar voices were significantly stronger than to familiar voices—at every stage of sleep. The researchers believe it is likely that these changes mean that our brains go into what they call “sentinel processing mode,” ceaselessly monitoring the environment for potential threats, even during sleep.

This new analysis focused on particular types of brain wave patterns, specifically K-complexes (a brain pattern that occurs during non-REM sleep) and micro-arousals (moments of partial wakefulness during sleep).

That alarm is the micro-arousal, which increases in frequency along with the K-complexes. Micro-arousals, a part of healthy sleep patterns, are just what they sound like, short periods when the sleeper gets closer to waking. According to the study: “The increase in micro-arousals following [unfamiliar voice stimuli] suggests a transient shift towards external processing of ‘vital’ environmental stimuli.” In other words, the researchers consider these transient shifts to be “little windows” of information processing that keep us connected to our environment while we sleep.

As Ameen explained in a thread on Twitter about the research: “The sleeping brain extracts relevant sensory information for further processing.”

K-complexes appear to play a dual role. These brain waves have been previously associated with both an arousal response that leads to further sensory processing and with “neuronal silencing” that “protects sleep.” So, even though the brain reacts more strongly to unfamiliar voices (with more K-complexes and micro-arousals), those voices were associated with deeper sleep.

A Safety Mechanism or Something Else?

According to a 2020 study, even during our waking hours, our brains selectively tune into sensory changes, with new stimuli triggering noradrenaline, a chemical signal that tells the brain to “pay attention.”

When I was doing graduate work at the University of California and living in Berkeley, California, I was startled from sleep before dawn one morning. I don’t know what initial stimulus woke me up but I opened my eyes on high alert, my heart racing. “Who’s there?” I boomed, terrified.

An intruder was just behind the door. He called back in a singsong voice, “I’m just going to school,” as if he were pretending to be my brother, with whom I shared the apartment (and who happened to be out of town). Without thinking, I jumped out of bed and rushed to the door. I could feel the air stirring as I chased after the intruder who presumably rushed down the stairs and out the apartment building’s front door. I never saw him and I didn’t catch him. As scary as that experience was, I am grateful that my brain woke me up out of sleep, ready to fight or flee.

Though the auditory stimuli used in this experiment were more complex than in previous experiments done by this lab, it’s likely that our brains’ responses to different auditory stimuli are far more nuanced than this experiment could detect. Mothers, for instance, are often highly tuned to their infants’ mewing cries and their children’s voices, which are both very familiar, waking out of deep sleep at the slightest cry.

Another nuance: The familiar voices in the study belonged to parents’ of the subjects. Ask the parent of any teen or young adult: Our children are often quite good at tuning out their parents’ voices, especially during waking hours. The human brain is a marvel of complexity and subtlety: Surely our sleeping brains respond differently to other types of familiar voices as well, such as those of our children, lovers, bosses, or coworkers.

Jennifer Margulis, Ph.D., is an award-winning science journalist and book author. A sought-after speaker, she is also a frequent contributor to The Epoch Times.