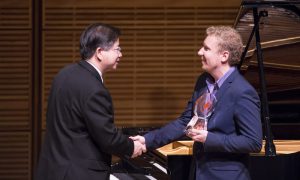 Pianist Timur Mustakimov on Serendipity, Artistic Freedom, and How His Talent Was Discovered
0 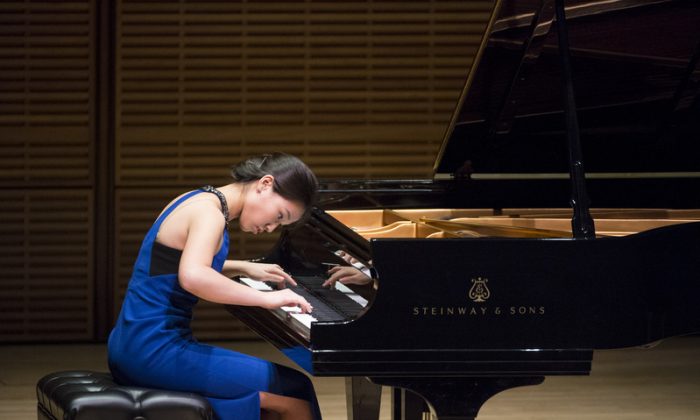 Aileen Gozali on stage at Carnegie Hall Oct. 5 during the Future Stars Recital as part of the 2014 NTD International Piano Competition, which drew contestants from 11 countries and territories as far away as Egypt and China. (Dai Bing/Epoch Times)
Arts & Culture

American-born Indonesian Chinese pianist Aileen Gozali, who was 19 years old at the time, received an Honorable Mention Award. She made her concerto debut at the age of 10 and has since been performing on stages all over the world, including Asia, Europe, and the United States.

Gozali spoke to the Epoch Times about her unusual environment when she learned to play the piano and her future aspirations.

Aileen Gozali: I started to play the piano at age five and a half. I grew up on this island in China that is called Gulangyu, and it is nicknamed the “island of piano.” It is how I started because everyone on the island owns a piano; all the kids learn to play the piano, so naturally, myself and my two other siblings started playing the piano. It didn’t start off as a carrier path; it was more [like] something that everyone did. So we did it too. My brother switched to cello and my sister switched to violin, but I stuck with it. I was a very shy person when I was younger, so I wouldn’t talk to people. I felt most comfortable when I was playing the piano.

I was born in California and my parents are Indonesian Chinese. We moved to China when I was younger and I didn’t speak the language at all, which is also why I didn’t like to talk to people. So music was a way for me to communicate with other people.

Epoch Times: How long do you practice everyday?

Ms. Gozali: I started off with 15 minutes a day. Then, as I got more serious, it became one hour, two hours … and now a minimum of six to seven hours.

Epoch Times: What made you decide to participate in the NTD competition?

Ms. Gozali: My previous teacher (at Cleveland) was Antonio Pompa-Baldi, who was the professor that gave master classes at the competition. I knew about the competition through him. I looked up the repertoire requirement, and I happened to know all the pieces that were required so I thought, why not? I also thought that because the piano competition is partners with NTD Television the contestants get a lot of exposure, and that was another thing that I really liked about it.

Epoch Times: You might be the youngest of the finalists.

There is so much intimacy and personality that you can put into [playing] Chopin’s music.
— Aileen Gozali, pianist

Epoch Times: At what age did you start entering competitions?

Ms. Gozali: I started entering competitions when I was eight. In China there are a lot of national competitions and it’s part of our piano education that everyone does competitions, so it’s pretty natural [for me].

Epoch Times: What is your advice to pianists about entering in competitions?

Ms. Gozali: I definitely think that preparedness is very important when it comes to competitions because when the nerves kick in and being in a completely different environment, surrounded by all these wonderful musicians, you never know what’s going to happen.

There are many ways to prepare for a competition: perform many times in front of an audience of many guises—from just your family members to your friends, the general public, and run through your pieces many times. At the competition this should allow you to let go of your nerves, or be more at ease, so that you’ll be able to really just play the music that you love, instead of worrying about all the notes and the mistakes that you will probably make.

Ms. Gozali: It’s definitely hard to let go of the idea that you are in a competition but for me, competition or performance—there should be no difference. The only difference would be that there are people there who are judging you, but in either case you shouldn’t be playing the music for the judges. You should treat it like any other audience that you would play for. So play your heart out. Put your whole soul into it. Do what you love.

Epoch Times: What do you consider to be the hardest piano piece to play or the hardest composer to play?

Ms. Gozali: I grew up playing Mozart, and for me Mozart is the most comfortable to play. Actually, the hardest for me is Beethoven because they are so different in terms of personality, style, and everything in their compositions. For me, it’s hard to switch from Mozart mode to the Beethoven type of playing.

Ms. Gozali: Mozart is one of them. I definitely love Chopin. There is so much intimacy and personality that you can put into [playing] Chopin’s music. I also feel that Chopin speaks closest to the audience because his style is very vocal, very narrative, it’s close to speech. Another composer I really love is Rachmaninoff. I’m more geared toward the romantic composers.

Ms. Gozali: Of course I hope to be able to perform, play music for people, and hope that they would be able to relate to my music. I feel like a lot of musicians are so much into building their careers that they forget that music is for people. The ultimate goal is to play music for the people and to bring all sorts of human emotions to your audience. I hope that I will be given the opportunity in the future to be able to do that more often. That’s what I want to do.

The 4th NTD International Piano Competition will be taking place Sept. 30 to Oct. 2, 2016. The competition will consist of one qualification round and three separate live competition rounds: Preliminary, Semifinal, and Final. Contestants from all around the world are welcome to apply. Applications will be accepted this fall.