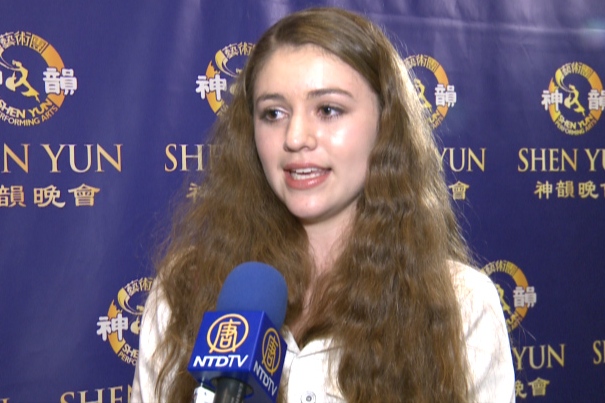 “It was very well done,” said Ms. Sahota. “It all fit together very beautifully.”

Marta Garza-Laird was among the founding faculty member of Oxnard College and is involved in Teatro de las Américas, a theater company that creates live stage productions that are accessible to English and Spanish speakers. Doris Sahota is retired, but still teaches part-time at Oxnard College and also plays piano and pipe organ. Julienne Cormier is a student of the MacKinnon Dance Academy.

Shen Yun Performing Arts was established in 2006 in New York with the goal of reviving the true, divinely inspired culture of China through the universal language of music and dance and sharing it with the world, according to the company’s website.

As a musician, Ms. Sahota noticed the music in the performance was composed especially for Shen Yun, and she was impressed with the live, full orchestra, which incorporates both Eastern and Western instruments.

“What was fascinating was the combination of the music of the Western and Eastern themes,” she said. “Because I’m very familiar with music, they fit together beautifully.”

As a young dancer, Ms. Cormier was overwhelmed by the skill of Shen Yun’s dancers.

“The women, you could see the strength in them, the fluidity, and then they’re all together and their endurance, their flexibility, so overwhelming,” she said. “Then the men are so strong and their endurance is amazing, so powerful.”

Ms. Sahota enjoyed the interaction of Shen Yun’s artists with the unique digital backdrop. During the production, some dancers appear to jump into or out of the background, and she said it must have taken a lot of practice to coordinate. She also liked the storytelling through the dances.

“I had never seen anything like that,” she said. “It was so smoothly done. I was just imagining it took an immense amount of rehearsal to have such a smooth transition in telling these stories. That was great fun, and also the fact that you don’t have to have words to tell stories. You can tell stories with movement, with your body, with music.”

Ms. Cormier noticed there was a lot of spirituality in the performance and Chinese culture, and Ms. Garza-Laird also felt a spiritual message.

“I felt the calmness, the tranquility, the spirituality,” said Ms. Garza-Laird. “I was feeling that with some of the dances … I think this is probably the thrust of the show.”

Ms. Sahota said she got very emotional several times during Shen Yun’s performance thinking about how such a beautiful culture was in danger of being lost, and she found parallels between preserving Chinese culture and preserving other cultures.

“We have a lot of wonderful tradition in Oxnard College of the Mexican dances and music,” she said. “If we don’t have these programs, then we’re losing them, and how sad that is that we would lose them.”

Ms. Sahota said she could see the only thing holding people back from preserving these ancient traditions was the pursuit of so-called modernization and also temporary self-gratification.

“We can do it through music and through spirituality, what’s holding us back? Money, right? It’s money. It’s an attainment of something that’s temporary. So the message really hit my values, really spoke to my values.”