‘You Could Really Feel All the History, All the Passion’ In Shen Yun, Says Former Dancer 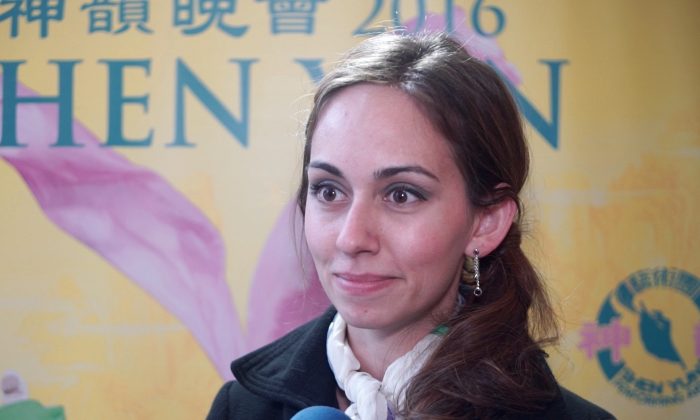 SALT LAKE CITY—Evoking China’s divine culture through classical dance, colorful costumes, a unique symphony orchestra and mesmerizing digital backdrops has been the hallmark of Shen Yun Performing Arts for many years. Every year a new show awaits eager audiences throughout the world and continues to attract many from the performing arts industry.

Former dancer Cassandra Zundel who had danced ballet, jazz, tap, and lyrical dance was intrigued by the advertising and decided to see the performance at Janet Quinney Lawson Capitol Theatre, in Salt Lake City on Dec. 30.

The experience was not what she had expected. Dance after dance Ms. Zundel became increasingly immersed in the show because “each dance brought a new story, and the stories were so intriguing about the history of China,” she said.

“I didn’t really know what I was fully going to experience, and after watching the whole performance, I feel like I have a great understanding about the Chinese culture and everything that’s going on over there,” said Ms. Zundel.

Ms. Zundel commended Shen Yun in their mission to revive and hold on to China’s culture as well as the values portrayed in the program.

Over its past 60 years of rule, the communist regime has sought to destroy China’s traditional culture and system of beliefs that centered on the idea of harmony between heaven and earth.

Based in New York, Shen Yun is independent of the Chinese regime and is therefore able to bring these ancient traditions to the stage.

“Holding strong to what they believe is really important to them, and I commend them for integrity and trying to hold onto that culture. It’s amazing,” said Ms. Zundel.

She also commented on the uniqueness of the costumes, their vibrant colors and the superb talent of the dancers who were individually expressive yet could come together in unity to convey the narrative which, Ms. Zundel thought, was really felt by the audience. “They really brought it through with all the movements that they did, and it just brought such a spirit,” she said mentioning that she saw some techniques in the show which she hopes to teach her daughter.

“This was magical because you could really feel everything and all the history and all the passion of the dancing … absolutely spectacular,” said Ms. Zundel.

Shen Yun’s Music ‘Takes on a Life of Its Own’, Says Composer

Composer Mikhail Cucuk who also attended the performance at Janet Quinney Lawson Capitol Theatre, on Dec. 30 found it to be “Wonderful. Most wonderful.”

He has always felt an attraction to Eastern culture. As owner and founder of the Symphony Dragon Music Company which specializes in scoring for film, television, and digital media projects he deemed himself able to visualize the music—something that he felt Shen Yun’s music made it easy for the audience to do as well.

The use of the Chinese instruments in conjunction with the Western instruments is also something that appealed to Mr. Cucuk. He especially liked the erhu, an instrument with which he had some prior experience through his work. He admired the different techniques used with the pipa and noted how expressive and lyrical it was.

The music not only complemented the dances “but it takes on a life of its own,” he said.

Overall, Mr. Cucuk found the show to be very authentic, adding: “I never knew so many unique performers were coming around like this, to be able to do this kind of thing.”

He was touched by the simplicity and universality of the music saying: “I think that’s important when you’re trying to reach out to more people, and I’ve seen that here today. And from what I know in the world too, it’s going to reach out to far more people and I hope someday… ,” pausing, as Mr. Cucuk implied the hope that someday Shen Yun will reach the people within mainland China.