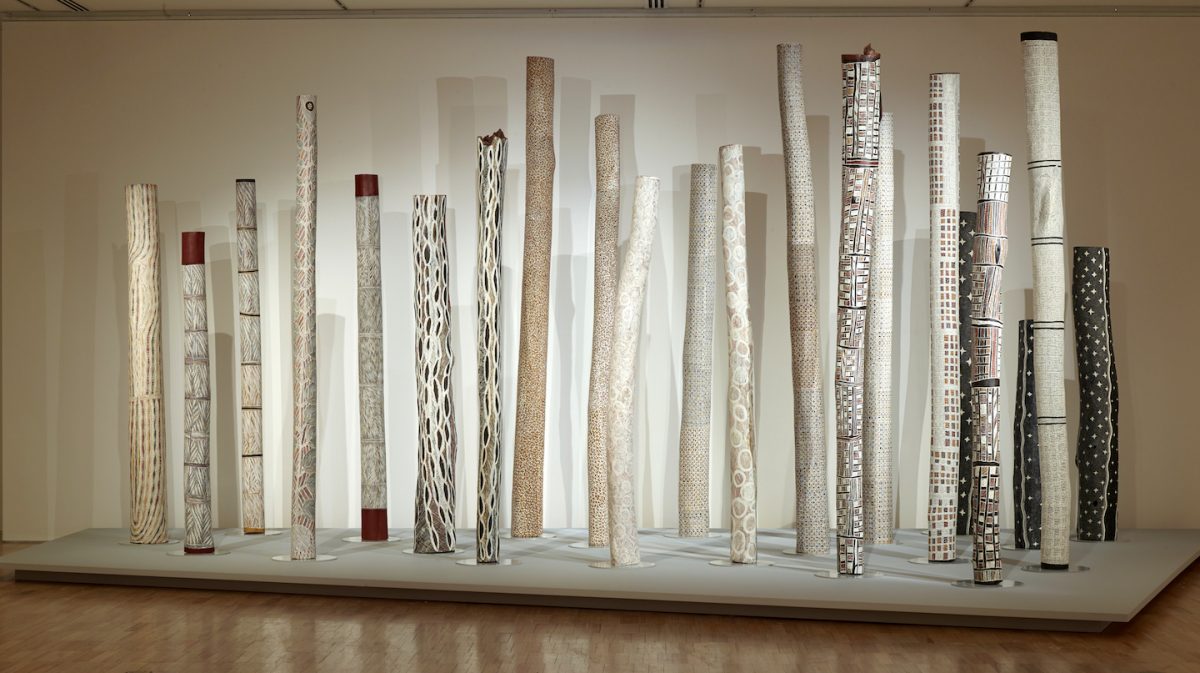 Burial poles, or larrakitj, were highly decorated and traditionally used to hold the bones of the deceased. (Shar Adams/The Epoch Times)
Arts & Culture

In 1947, when anthropologists Ronald and Catherine Berndt provided paper and crayons to aboriginal elders in the Northern Territory’s Yirrkala region, they had little idea they would be creating one of Australia’s most important collections of indigenous art.

The Yirrkala crayon drawings, also known as the Berndt drawings, are now recognised by both indigenous and non-indigenous people, not only for their technical mastery and aesthetic sensibility, but also as rare documents of cultural knowledge.

“Our history looms large in these drawings…when you look at this art, it is not just a thing of beauty – it discusses the environment and nature, the secret areas for Yolngu. I think the Old People decided to share these secret things so that people could know who we are,” said Wäka Mununggurr, ceremonial leader and senior custodian, Djapu clan, in a statement.

Ronald Berndt, described the collection as his greatest accomplishment and “the crown jewels of Australian ethnography”. The collection is also inscribed in the Australian register of the UNESCO Memory of the World register, but for many years the drawings remained undiscovered, languishing in a storeroom in the Berndt’s house in Perth.

Naminapu Maymuru-White, a respected Yirrkala artist in her own right, has works by two ancestors in the collection and was in Sydney at the exhibition’s opening. On approaching the gallery, only the second time she had viewed the works, Nami described a moment of hesitation, the drawings engendering a mixture of emotions.

“It brings back all of the memories of our fathers, grand-dads,” she told Epoch Times, admitting that she had wanted to cry. She said the cultural content was powerful and provided history and stories for future generations, with much of it beyond expression in English.

“I am really glad to come back and see all this work of our people, what they did to encourage young ones and to realise how beautiful their work is,” she said.

Nami’s ancestors were just two of the 27 north-east Arnhem Land, or Yolngu, artists represented in the collection. Many of them have since been recognised for their detailed bark paintings which documented land, culture, family lineage and sacred sites.

Cognisant of their importance, the Berndts were concerned that the 219 bark paintings they had collected would be damaged as the fragile works were transported south. A remote, coastal centre, Yirrkala had no wharf at the time and the works had to be carried out to luggers offshore to be shipped out.

In an effort to produce more stable works, Ron Berndt cabled his father in Adelaide to send up butcher paper and crayons. Despite never having used western media before, the artists embraced the material with enthusiasm, producing 365 works.

Berndt made notes on each work in discussion with the artist and the group, before rolling the works up in individual tubes. He took them to his place in Perth where they remained for many years.

It was not until the late 70s with the opening of a new museum in Perth, that Berndt revisited the works, and it was only in late 1989 that the aging anthropologist dictated the information he had recorded in his notebook over 40 years earlier. The process was completed mid 1990, just two months before his passing.

Andrew Blake lived in Yirrkala for a number of years and conducted interviews with the present ceremonial leaders, the children and grandchildren of the earlier artists. The interviews were made into a film and along with an essay by him, a number were included in the catalogue for the exhibition.

Speaking at the NSW Art Gallery’s media preview, Blake noted the diversity of the works and how they moved from the literal to the sacred and profound.

He pointed to one of the drawings, Yirritja ceremony at Gangan, which depicts the emergence of one of the creator beings.

“There are an enormous number of levels and meanings to this, from the most secret and sacred to the narrative,” he said.

Blake said it was up to individual artists to determine how and what they would reveal of secret teachings, and noted that what was revealed was often also an indication of status within the clan.

In an essay included in the exhibition book, Blake discusses the many fish trap drawings and notes that while they may look like repetitive lines and hatching, many varied considerably with conscious breaks in both line and pattern.

“In benefiting art, the fish traps paintings are wiripu- the same but different,” he writes.

Curator of the exhibition, Cara Pinchbeck, described the knowledge embedded within the works as “phenomenal”.

“This deliberate complexity shows that the artists knew the importance of what they were doing: documenting their title deeds to land, laying down details of Yolngu law and providing meticulous information about ancestors intimately connected to country and still informing the present,” she said.

The Yirrkala drawings are accompanied by a collection of larrakitj, memorial poles, traditionally used to hold the bones by the deceased and which were produced by current leading artists at Yirrkala.

The exhibition continues at the Art Gallery of NSW until 23 February, 2014, and from there tours to the Queensland Art Gallery, Brisbane, 12 April–19 July, then Charles Darwin University Art Gallery, Darwin, 7 August-3 October, 2014.