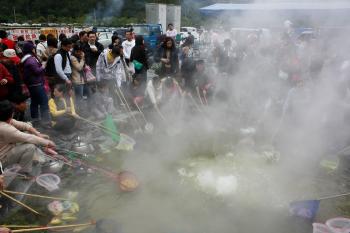 Taiwanese come to the geyser in Yilan County from near and far, crowding around for up to an hour to boil their lunch or dinner. (Matthew Robertson/The Epoch Times)
Travel

Flower-Watching and Geysers in Yilan County

By Matthew Robertson
Print
TAIPEI, Taiwan—The friendly man who answered my questions had heard about the corn-cooking geyser last week on a TV documentary in Taipei, and had seized the long weekend to check it out with his family. Another woman heard our conversation and piped up with her story. She’d come specifically for the geyser as well. She told us in a hushed voice that it reappears in a different place after every rain, and only the locals know where to dig to find it. No one knows how they know where it will reappear, she said.

Gathered around the boiling pit of water 10m in diameter were people of all ages. They had brought their own baskets and small nets, or bought them on site, along with corn, eggs, prawns, yams, and whatever else can be boiled. There was no space left for latecomers, and the friendly man said that corn should be expected to take about 45 minutes, while smaller items should be shorter. Then someone commented that the clever people had already dumped their whole, sealed nets into the broth and gone away for a paddle, while everyone else was stuck squatting and waiting. It seemed for many, however, that the excitement of being at the geyser-face more than made up for it.

The shifting geyser regularly attracts several hundred daily visitors and their cars, as well as the regular carnival operators and food stalls, said to be ubiquitous by locals (it is supposed to be cheaper for them to suffer the fines for illegal operation than pay taxes). Around the geyser along one side stood a row of game tents with unusual prizes, along the other the barbeques and food stools, where the nets and corn were also sold. Vans and chairs were scattered randomly around the periphery, where families sat down together to hungrily gnaw through their piping hot spoils taken directly from the pit. Food cooked in the geyser is supposed to taste better and be healthier than regular food, according to the friendly man, who didn’t say where he’d heard that.

While some waited for their corn to cook, others who weren’t hungry tried their luck on the games. By successfully throwing darts into small water balloons hanging on a board, for example, punters could expect to receive either a glazed, porcelain cat, or a small box of fruit juice. Other games included a row of hybrid, half-electronic half-mechanical, cacophonous pinball machines—nearly every seat filled with youngsters—and next to it a simple softball-throwing game, which was deserted.

Despite the unusual and unexpectedly revelrous community based around the geyser in the middle of nowhere, it forms only one part of the attraction of Yilan County. Visitors can also go to Taiping mountain, Dongshan river, Qinshui park, and the coast.

Even the small township nearby to the geyser, called Loudong, is famous. On any given Saturday crowds flock to get into one of its small breakfast restaurants, named Bu Rou, like they were waiting for a rock concert. Barriers have been set up, and well over one-hundred people spill onto the street waiting well into the afternoon. Police can even sometimes be seen keeping people in order. Their secret is a special meat battered in eggs, flour, the proverbial secret spices, and sauce. The owner has also been interviewed by TV stations several times, adding to the appeal.

Taiping mountain is famous because of the extremely high caliber of wood that it used to export to Japan many years ago. The trees in some areas have been cut down now, but it’s still famous for its so-called “forest theme park” which lets frazzled city-dwellers unwind for a few days, staying in log cabins and drinking tea.

People from the cities may also take a trip to Qilan, another forest, and poke around the summer house of old Chiang Kai-shek. They may also go to Dongshan river, famous for the giant Dragon Boat races it holds every year on the Lantern Festival. Next to Dongshan river is also Qinshui park, which holds a series of water-themed festivals in July and August, featuring concerts, fountains, pools, and more. True to its name (literal translation meaning something like ‘getting closer to water’), alongside the fountains, visitors will also receive a by-the-way education in water conservation and, for example, explanations of how rainbows are formed.

It seems any family’s trip to Yilan is not complete, however, without a spot of flower-watching. Parts of every popular car route are flanked by rice fields in fallow, full of small, colourful flowers. The tradition began only sometime after 2000, when tourism around Yilan started to really pick up. The local government decided to pay farmers to plant flowers on their resting land. Not much care other than getting the seeds in the ground is paid to the aesthetics, but no one seems to mind. Those from the city stop their cars, huddle in the muddy troughs among a sea of yellows, reds, purples and pinks, and take photos together, while snacking on something from the illegal food stalls set up for tourists.