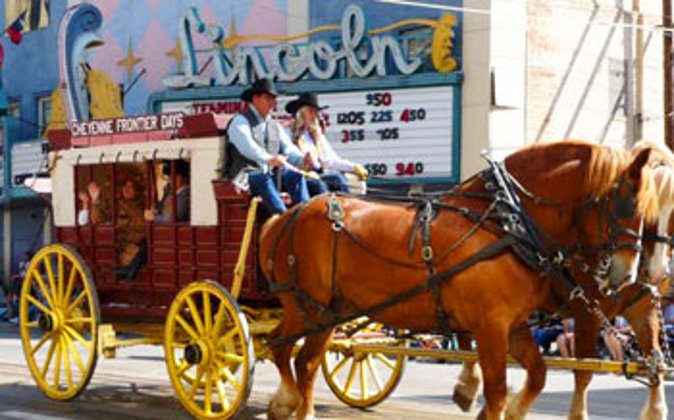 An unexpected surge of patriotism overcomes me as the Union Pacific steam locomotive pulls into the depot. Music plays, banners wave, the arriving faces beam from the train’s open windows.

The sky is crystal clear, the sun strong – all the makings of a festive opening for Cheyenne’s Frontier Days.

Passenger rail service to Cheyenne ended in 1971, making today’s arrival a special event. For a while, some of the passengers will poke around the renovated depot, where vendors of Western crafts have set up for the rodeo’s ten-day duration.

The building, designated a National Historic Landmark, is the center of Cheyenne’s downtown in heart and soul.

By the 1850s, railroads had become the primary method of transportation, but it wasn’t until the first transcontinental railroad was completed in 1869 that the two U.S. coasts were connected.

Cheyenne was already settled at the time the railroad came through, but was to become an even more important center, and home to cattle barons as the West was opened up to development.

Enter The Depot Museum from the lobby and you’ll find an exhibit of black and white photographs documenting Cheyenne’s rich history and the arrival of the railroad. Union Pacific was and remains a prominent presence in the city.

Exiting the depot I found myself in Depot Square, site of several free summer concerts. This city of approximately 50,000 swells to almost ten times its normal size for Frontier Days, and crowds have appeared for the opening day parade now rounding the corner.

Parades, with their inflatable cartoon characters, have always bored me. Happily, none are in sight. Instead, passing by are Miss Frontier and her lady in waiting.

And look, here comes the blacksmith shop, the dance hall, the one room school house, and of course, it wouldn’t be a Western parade without the stagecoach!

Another tasty Frontier tradition begins with 5,000 pounds of batter, 650 lbs of butter, and 450 gallons of syrup, 4,000 lbs. of ham and 8,000 pints of milk. A hundred thousand pancakes will be served free to waiting throngs of visitors three times during the week.

But now that I’ve been introduced to Cheyenne’s past and present, it’s time to go to the arena…

The Daddy Of ‘Em All

As an easterner more experienced with New York’s canyons than those of the West, I am in some ways unprepared for this visit. I’ve come here specifically for the rodeo, yet I know very little about it, except for bull riding, which I’ve seen on TV.

So I join the “Behind the Chutes Tour” at the entrance to the rodeo grounds. Chutes are the pens from which animals are released for their events.This is a great opportunity to see things up close.

Part sport, part skill, all entertainment, the rodeo evolved from cattle herding in the West. Today’s first event, bull riding, is one of the most exciting.The open-air arena’s ground is dirt, the air is dry and the sun is hot. I will own a cowboy hat within an hour, and my sensitive skin will appreciate that the super wide brim protects my entire face and neck. I always wondered why cowboy hats looked like that. Now I know.

Each of the 120 contestants has paid a $350 entrance fee for what would be the longest eight seconds of any sensible person’s life.

Immediate disqualification occurs if the rider is bucked off or touches the bull with his free hand before the eight-second count.

Several go down quickly, and arena cowboys rush to distract each angry bull and direct it to the pens.

What would possess a cowboy to mount such an animal, knowing that he could be thrown face first into the bull’s horns one second or trampled underfoot the next?

It must be the thrill and excitement. I no longer wonder why I see no women’s names on the list of bull riders.

Next up is steer wrestling. A cowboy on horseback chases after a steer, ropes it around the horns, brings it to the ground, then jumps from his horse and ties up three of the steer’s legs – all this in 30 seconds!

If the cowboy and his horse don’t operate as a team, there will be no chance at a prize. The partnership between animal and rider is an integral part of rodeo success, just as it was in the days when ranching ruled these plains.

Then come steer roping, tie-down roping, and saddle bronc riding, some events for rookies, others for seniors.

Finally, the cowgirls on horseback charge out for the barrel racing, maneuvering in patterns around three barrels, kicking up dust, hats flying. Against the dusty background, the bright colors of their sequined outfits sparkle as they roar by.

Indian Village has Native American music and dance, storytelling, cuisine, and crafts. If you don’t have any Western wear, now is your chance to pick up shirts, belts, pointy boots, and the much needed cowboy hat from the vendors on the arena grounds.

Copyright © 2014 by Go Nomad. This article was written by Cindy Bigras and originally published at www.gonomad.com