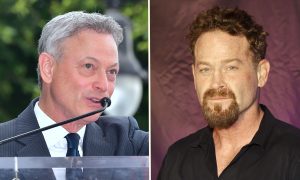 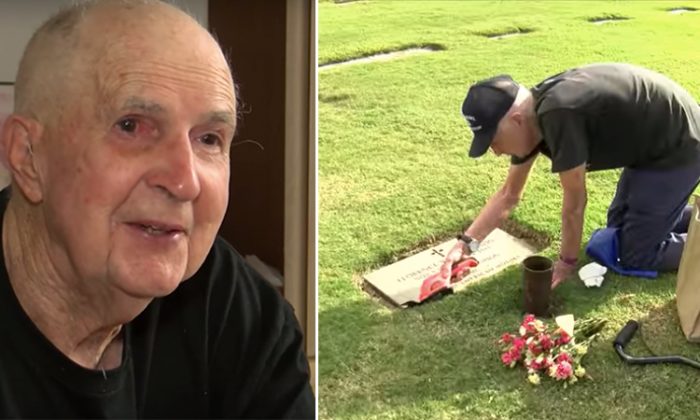 (L) Ted shows old photo of himself and his wife KNOE 8 News; (R) He has been visiting her grave for the past 5 years. (YouTube Screenshot | CBS 17)
Family & Home

The kind of forever love that some couples find can overcome any obstacle or boundary, no matter the time or distance required. Just ask Ted Richardson, whose love with his wife, Florence, has transcended even life itself.

Richardson, 93, has spent every single day with his wife for the last five years—visiting her grave after her passing, after 72 years of marriage.

He and Florence met when he was 16 years old and she was just 14, finding their soul mates before they were even old enough to vote. “I was standing in the hall,” he told Hawaii News Now. “The classes were changing and I saw a beautiful girl. I went home and told my daddy that night I saw the girl I was going to marry.”

Sure enough, the pair wed less than a decade later, after Richardson enlisted in the Marines and fought in World War II. They then spent nearly the next seven decades building a life together, raising a child while Ted worked as a teacher and Florence made a career with the FBI.

Despite being a trailblazer in her own right, Florence still had time to, as Ted described it, “take care of him for 72 years.”

“I never heard her say a bad word,” he honestly admitted.

On this Veteran’s Day, I salute Maje Richardson, my teacher & middle school principal. After fighting in the Pacific…

The adorable couple stood by each other through everything, thick and thin, as they grew old together. After the war, they eventually moved to Hawaii.

So even though Florence passed away in 2013, her husband has made sure to spend every day with her anyway—despite the lengthy trip it requires to do so.

Six days a week, every week, Richardson gets on the first of three buses at the crack of dawn, making the lengthy trip to the National Memorial Cemetery of the Pacific, where she’s buried.

He’s there by the time the gates open in the morning at 6:30 a.m., paying her back for the 72 years that the love of his life dedicated her days to caring for him.

He’s meticulous as he cleans her gravesite each day, jokingly telling her that he’s there to provide thank yous in the form of carnations ready to bloom.

Dad visits mom's grave quite often. With bus transfers to and fro and time to visit it takes about six hours round-trip. Please click on the photo to see the gravestone "BELOVED AMERICAN MOTHER."

“I always tell her when I go up there, ‘Payback time,’” he said.

No matter what the weather condition is, this dedicated husband cleans her grave by mowing the grass surrounding the grave and brushing any leaves or debris off it.

Once a month, he also offers flowers to her graveyard.

❤ I'm so glad I found one Marine love his wife for ever. Thanks you for your service Cpl Ted Richardson.!🇺🇸❤

It’s been over 1,300 trips and counting for Richardson, even though his health has started to decline enough that the cemetery staffers now help him to the grave site by driving him.

“I used to walk up. Then I had to start using a cane,” he said. Now, he’s given an extra boost, making sure his legs can rest a bit more.

Despite the increasing difficulty he has with mobility, though, the kindhearted veteran says that he has no plans of stopping.

“I’ll keep going as long as I can go. God will tell me when I’ve had enough,” he admitted.

The faithful veteran has also managed to organize flowers from the church to offer to his wife’s grave after he dies.

How do you explain war to a child when they are so innocent?