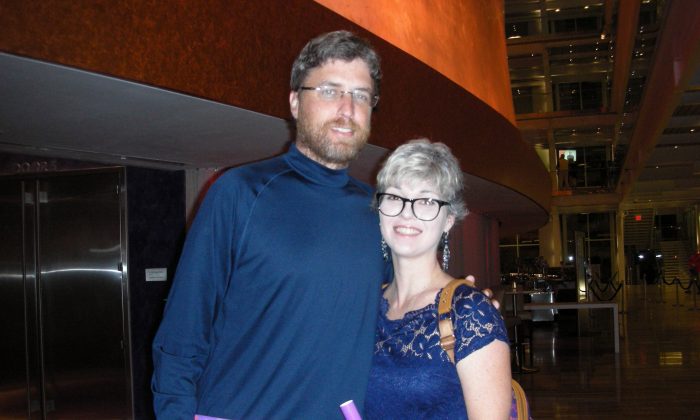 ORLANDO, Fla.—James Abel writes memoirs and specializes in historical accounts, which often means delving deep into research of world-changing eras, like World War II, or the Holocaust, or the Civil Rights movement. On March 15, he experienced a deep dive into ancient Chinese civilization through Shen Yun Performing Arts.

“It’s remarkable how many different little aspects of Chinese life they tied into these storytelling. That was the best part for me,” Abel said at the Dr. Phillips Center for the Performing Arts.

“With the enormity of the country, with its long history, and [Shen Yun] touched on so many different regions, so many different ethnic backgrounds and such within the country. I think that was very well done! That’s the part I think I enjoyed the most, the variety of different storytelling that they did,” said Abel, who attended the performance with Ms. Kelly, an artist.

Shen Yun was formed in New York in 2006 by a group of artists who wanted to revive the traditional Chinese culture that has been all but lost. Since then, it has ballooned to now six equal-sized companies that tour the world each year to share China’s divinely inspired 5,000 years of culture through the arts.

Abel certainly noticed the theme of faith threading throughout the fabric of Chinese history and culture.

“Everything they pass down is rooted in that, so faith is something always sort of the foundation of the Chinese family, and I think that the way they presented it there is remarkable,” Abel said.

He was also impressed with Shen Yun’s inclusion of stories based on real events from the modern-day—specifically dealing with the fact that this traditional culture is not allowed in China under the communist regime.

It was remarkable to see this civilization that has held onto its faith for 5,000 years, Abel said, and a shame that the modern-day regime has tried to suppress it.

“I feel they are missing an extraordinary part of their story, really!” Abel said.

Abel was familiar with the movements that sought to root out traditional culture, such as the Chinese Communist Party’s violent Cultural Revolution, as he has studied 20th century Chinese history.

But to see Shen Yun bring back this old culture in a vivid, immersive way, Abel also saw hope.

“It’s not just someone sitting there reading history books to you, but telling you through stories you can relate to,” he said. He described one story where a woman dressed up as a boy to be able to go to school, a forbidden love story where the father disapproved of his daughter’s choice of husband, and other stories that people from around the world could relate to.

“In the world’s largest country you cannot help but have that many different ways of life, that many belief systems, and to not celebrate each of them, to not even allow them to be themselves is something that needs to be told, I think,” Abel said. “It’s a wonderful program.”