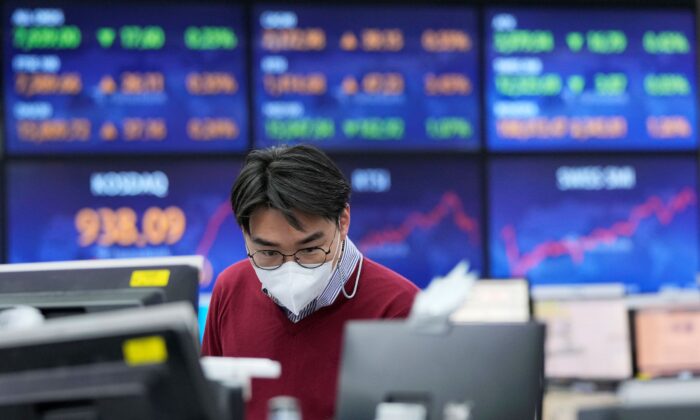 BEIJING—Global stocks were mixed Thursday after China cut interest rates and President Joe Biden said “we’re not there yet” on lowering punitive tariffs on Chinese goods.

London and Tokyo gained while Shanghai and Frankfurt declined.

The Chinese central bank cut rates on one- and five-year loans after growth in the world’s second-largest economy sank to 4 percent over a year earlier in the latest quarter following a crackdown on surging debt among real estate developers.

“The question remains whether banks will respond by increasing lending,” Iris Pang of ING said in a report. Amid uncertainty about heavily indebted developers, Pang said, “banks will be picky about who they lend to.”

Biden said Wednesday it was uncertain when his administration could lift tariffs imposed by his predecessor, Donald Trump, on Chinese imports beginning in 2018 in a fight over technology and trade. The two sides signed a preliminary deal in January 2019.

“I’d like to be able to be in a position where I could say they’re meeting the commitments,” Biden said at a news conference. “But we’re not there yet.”

On Wall Street, futures for the S&P 500 and Dow Jones Industrial Average were 0.3 percent higher.

On Wednesday, the Dow retreated 1 percent on Wednesday and the tech-heavy Nasdaq composite lost 1.4 percent.

Apple shed 2.1 percent and chipmaker Nvidia fell 3.2 percent. The technology sector of the S&P 500 has fallen more than 8 percent this year.

The market “succumbed to renewed fears of inflation/Fed tightening,” Vishnu Varathan of Mizuho Bank said in a report.

Investors have been wary since Fed officials said in mid-December plans to wind down bond purchases and other stimulus would be accelerated due to the spike in U.S. inflation to a four-decade high.

Late Tuesday, investors were pricing in a better than 86 percent probability the Fed will raise short-term rates at its March meeting, according to CME Group. That is up from 47 percent a month ago.

On Wednesday, Biden called on the Fed to do more to fight inflation.

“Given the strength of our economy, and the pace of recent price increases, it’s important to recalibrate the support that is now necessary,” Biden said.

Investors are watching the latest round of corporate earnings for indications inflation might be cutting into profits.