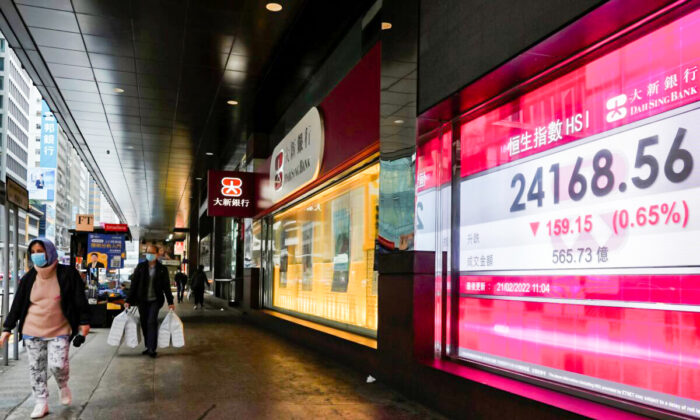 BANGKOK—World shares were mixed Monday as investors watched for developments in Ukraine after Russia rescinded earlier pledges to pull tens of thousands of its troops away from Ukraine’s northern border.

U.S. markets will be closed for a holiday but futures were higher. Shares rose in early European trading but fell in most Asian markets.

The White House said President Joe Biden had agreed “in principle” to meeting with Russian President Vladimir Putin if he refrains from launching an assault that U.S. officials say appears increasingly likely.

Russia’s decision extended military exercises that brought an estimated 30,000 Russian forces to Belarus, Ukraine’s northern neighbor. They had been due to end Sunday. The troops are among some 150,000 deployed along Ukraine’s borders, along with tanks, warplanes, artillery, and other war materiel.

The concern that Russian troops could descend on the Ukrainian capital, Kyiv, a city of about 3 million people less than a three-hour drive away, has added to uncertainties for investors already jittery over central bank strategies to combat inflation.

Russia is a major energy producer and a military conflict also could disrupt energy supplies and make for extremely volatile energy prices.

Markets are on “tenterhooks,” Mizuho Bank said in a commentary. But it added, “relief rallies appear to be emerging; drawing comfort from Presidents Biden and Putin having ‘accepted the principle’ of a summit; conditional upon Russia not invading Ukraine.”

Australia’s S&P/ASX 200 gained 0.2 percent to 7,233.60 as the country reopened its borders to more international travel after nearly two years of being mostly sequestered due to the pandemic.

Outbreaks of coronavirus fueled by the highly contagious omicron variant are also a worry. A preliminary reading on factory data for Japan on Monday showed a sharp drop in the manufacturing purchasing manager’s index, to 52.9 from 55.4 on a 0-100 scale where readings above 50 indicate expansion.

But analysts said they expect activity to rebound as the latest wave of infections subsides.

On Friday, stocks capped a week of volatile trading on Wall Street with a broad sell-off.

The S&P 500 and Dow Jones Industrial Average both slipped 0.7 percent. The Nasdaq composite bore the brunt of the selling, skidding 1.2 percent.

Treasury yields fell Friday, as investors shifted money into the safety of U.S. bonds. The yield on the 10-year Treasury, which affects rates on mortgages and other consumer loans, was steady at 1.93 percent early Monday.

Markets have been rocked by worries over how companies will cope with inflation at decades-high levels in many countries, and over whether consumers might pull back on spending to cope with higher costs.

Wall Street is looking ahead to determine how markets will react to a more aggressive monetary policy from the U.S. Federal Reserve as it begins tightening after two years of ultra-low interest rates and other supportive measures.

In other trading Monday, U.S. benchmark crude oil lost 15 cents to $90.06 per barrel in electronic trading on the New York Mercantile Exchange. It gained 17 cents to $90.21 on Friday.